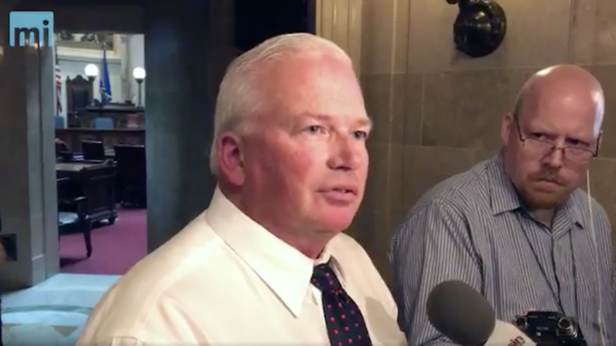 [Madison, Wis…] Is there a budget breakthrough brewing?

There certainly seemed to be significant movement Thursday in snapping the stalemate that has bogged down work for months and pre-empted passage of a biennial state budget, now three weeks past due.

But don’t prepare your 2017-19 budget scrapbook just yet. Senate Majority Leader Scott Fitzgerald (R-Juneau) late Thursday said, No deal – at least not yet – to a compromise proposal by Gov. Scott Walker.

“There’s no deal yet. That’s for sure,” Fitzgerald told reporters following a conference call with all 19 members of the Senate GOP caucus. “And I don’t know if the letter the Assembly sent out necessarily moved anything.”

In a hand-delivered letter Thursday to the governor, 14 Assembly Republicans, including Speaker Robin Vos (R-Burlington) said they accept. That is, they accept Walker’s latest peace offering, which would shift money slated for income tax cuts into the troubled transportation fund – a move designed to bring the GOP majority closer to finalizing the budget.

The proposal also contemplates trading personal property tax repeal, an initiative with widespread support from Republicans in both houses, for bonding-free transportation spending, according to state Rep. Dale Kooyenga (R-Brookfield). Kooyenga, a member of the Legislature’s Joint Finance Committee, was one of the 14 members to sign the Assembly’s letter to the governor.

“We believe this compromise utilizes our current resources wisely by taking all or a significant portion of the proposed income tax cuts from this budget and using the savings to provide funding for the transportation system,” the Assembly Republicans wrote.

More so, according to Vos and company, Walker’s offer includes the “possibility” of no new transportation bonds.

Some of the Senate’s fiscal hawks find it hard to stomach the political horse trade of income tax cuts for transportation, particularly in light of an audit showing a Department of Transportation riddled with inefficient and wasteful practices that have cost taxpayers billions of dollars. And Fitzgerald said his caucus isn’t budging on personal property tax relief.

Assembly Majority Leader Jim Steineke (R-Kaukauna) praised the governor for his leadership in coming up with a “solution that works and is conservative, that helps keep the major projects on track.” It’s not the long-term fix Assembly Republicans had hoped for, Steineke said, but it “adheres to” their principles.

Walker and Senate Republican leadership have been dead set against gas tax hikes and fee increases suggested by the lower house. The compromise would hold true to that pledge, but at a cost to taxpayers.

“The tradeoff reflects what I’ve been trying to explain for the last few months. If you are going to use general revenue to fund transportation you are going to have higher income taxes,” Kooyenga said, noting that taxpayers are on the hook for the principle and interest on transportation bonds. “By forgoing income tax cuts now we can probably afford greater tax cuts down the road.”

“I think a vast majority of people do understand the importance of transportation infrastructure. If you talked to them and said, ‘You could have a few dollars back in your paycheck every week or invest it in transportation,’ I think they’d probably say, ‘Use it, as long as we get reforms (to the DOT) done,” the majority leader told MacIver News Service.

Earlier this week, Senate Republicans unveiled their own budget, a proposal that stays fairly faithful to Walker’s plan but includes $712 million in new transpo bonding. Fitzgerald has said his caucus is not interested in new revenue (tax hikes) to pay for transportation until the DOT gets it’s financial house in order. On Thursday, the senator said Vos continued to raise the topic of tax increases, at least on electric vehicles.

While Assembly Republicans have stood firm against borrowing, in the letter to Walker they say they understand there is a “possibility of new bonding based on future federal appropriations and revenue-supported bonding.”

The Assembly’s bonding position has caused some confusion, Fitzgerald said.

Vos did not return requests for comment. Neither did Walker spokesman Tom Evenson. Members of both houses, however, say the compromise deal is straight from Walker. Fitzgerald said it was floated to bring Vos on board. Its sounds like the Assembly appreciates the offer.

“We believe the broad framework that you provided is responsible because it acknowledges that the state should not issue more transportation bonds without having a sustainable way to pay for that debt,” the letter states.

The authors conclude with a hope for a “renewed effort to negotiate in good faith and pass a budget in the very near future.”

Talk of getting the Joint Finance Committee back together next week is a bit aggressive, Fitzgerald said. He’s thinking more like the week after.

No deal. Not yet, anyway.