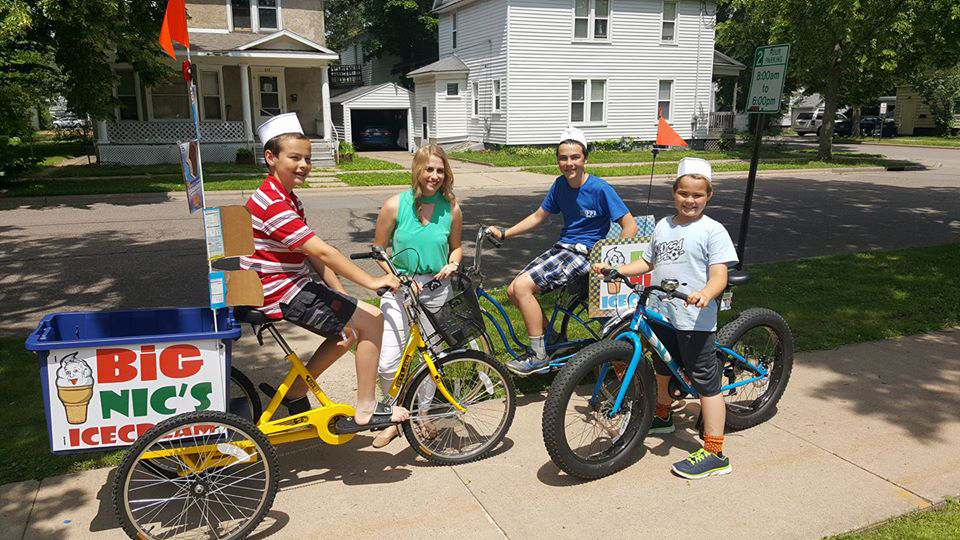 The Wausau tween wanted to do something more with his summer vacation than play video games and hang out. He wanted a job. He wanted to make money.

His parents, owners of Ruffi Law Offices in Wausau, decided to check in with the regulators first before Nic proceeded with his ice cream American Dream. For his troubles, the would-be entrepreneur received a thick commercial vendor registration packet, replete with various rules and regulations. Nic would have to have his bicycle and his ice cream cooler inspected by the city health department, a $60 fee, and pay a permit fee – $75 for six months, $100 for a year.

But in order to get the permit, Nic’s parents would have to take out an insurance policy for $1 million in liability, at a premium cost of $500. And the city required it be named as an additional insured party on the policy. Apparently the city was concerned about the possible carnage caused by a kid selling Fudgsicles from the back of his bike.

“So my kid would have to spend $620 in fees and insurance before he sells one ice cream sandwich,” Sarah Ruffi, Nic’s mom, told MacIver News Service in an interview on the Vicki McKenna Show, on NewsTalk 1130 WISN in Milwaukee.

But that wasn’t the worst part, Sarah said. After digging through all of the regulations, the Ruffi family found that Nic need not apply. The city’s standard commercial ordinance requires a permit applicant be at least 18 years old.

Sarah said her husband was told by Wausau Mayor Robert Meilke that the rules are the rules, that there was nothing the city could do.

“We were not satisfied with the answer we got,” she said.

So they talked to city council members. They weren’t done there. Sarah and Nic drove to Madison to share their ice cream permit saga with the National Federation of Independent Business-Wisconsin. Then they hit the Capitol, meeting with state representatives and senators and “explaining the hurdles this 12-year-old kid is going through to try to sell ice cream.”

The city, it seems, has relented – somewhat.

Responding to the Ruffis concerns, the Public Health and Safety Committee has approved a youth vendor permit that would lift the age restriction, lower the cost of the permit, and reduce the liability insurance coverage requirements. The committee proposal goes before the full City Council Tuesday evening.

Meilke said this is all a “big story about nothing,” that the Ruffis are making a “mountain out of a molehill.”

“I really believe the city has been unfairly portrayed. There is a legal process we have to go through,” the mayor said.

The health and safety committee, he said, gladly created a youth vendor permit to accommodate Nic Ruffi and young businesspeople like him. Meilke added that the city could cite the 12-year-old for selling ice cream on his bicycle without the proper permits and insurance, but it won’t do so.

The city must be protected, Meilke said, from possible lawsuits.

“Let’s say he (Nic Ruffi) sells ice cream with a peanut in it and someone has a peanut allergy. Who is going to be on the hook for that? Not the city,” the mayor said.

Alfonso said any ordinance must comply with state and federal child labor laws, which include different requirements depending on the age of the child worker. Nic Ruffi, it would appear, would fall under the “domestic business” category, meaning he would not be bound by the same kind of restrictions as children employed or contracted through a non-domestic business.

The assistant city attorney said Wausau government officials are being accused of “beating up lemonade stands,” and that couldn’t be further from the truth. There are exceptions to the main commercial vending ordinance, Alfonso said. It doesn’t apply to kids selling lemonade from their homes or on private property, with approval of the property owners.

“This applies to people selling on the street and on sidewalks. We have always allowed kids to have a lemonade stand,” she said. What’s different in Nic Ruffi’s case is that the young entrepreneur wants to sell his product on his bike, going door to door, the attorney said.

“We did tweak that for his situation and for other kids like him,” Alfonso said.

Sarah Ruffi said the proposed youth vendor ordinance is a step in the right direction and that city officials’ hearts are in the right place. But it still contains unnecessary restrictions and costs. Even the $100,000 liability insurance cap comes with a costly premium, of $265, she said. That operational expense is a big cut to Nic’s profits. Sarah said she’d like to see a waiver for all kids.

It’s all been a learning experience for Nic and his older brother, Mac, and in some ways the lessons have been invaluable. It’s taught the boys what owning a small business truly entails. It’s taught them not to accept the status quo. Mac, 13, saw potential in his kid brother’s business plan and wants to get in on the venture. A “born litigator,” according to his mother, Mac is scheduled to address the full council at the meeting.

Sarah said Nic and Mac aren’t alone in their push to loosen the grip of government regulation.

“I find it very hard to believe that my sons are the only ones who want to be young entrepreneurs in this state,” she said. “I think the government’s job is to get out of their way and encourage them to be entrepreneurs and follow that spirit rather than say, ‘Hey, we’re going to make it difficult and expensive for you to get into business. I think that’s just wrong.”