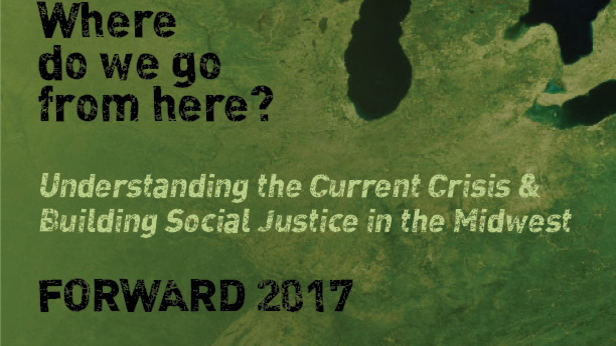 [Madison, Wis…] -Not long ago they called it RadFest – as in a gathering of capitalism-hating radicals in the bastion of modern liberalism that is Madison.

The latest iteration is billed Forward 2017.

Ahh, but what’s in a name, really? RadFest or Forward, this two-day conference of the usual Social Justice Warrior suspects will be crawling with left-wingers who want to do everything from “unite and love on each other” to overthrow President Donald Trump and his fellow Republicans who control Congress.

The gathering gets underway this evening at Edgewood College in Madison. It is organized by the University of Wisconsin’s A.E. Havens Center for Social Justice. Calling this socialism echo chamber a liberal think tank is kind of like calling LeBron James a basketball player. The Havens Center is so far left many a liberal from a generation ago may not recognize its brand of progressivism.

Forward 2017 asks a vital question among the socialist movement that was driven out of the seat of power in November by voters who had grown weary of eight years of socialism experimentation. “Where do we go from here? Understanding the Current Crisis & Building Social Justice in the Midwest” is the overarching theme of an action-packed get-together of left-wing activists. Sessions include, “Prison Abolition & Community Control of the Police,” “Direct Action for Expanding Sanctuary” (cities, that is), “How to Organize Your Workplace from Scratch,” and the topic on every America-loathing, free-market-despising, some-lives-matter,-others-not-so-much socialist’s mind, “Building Cultures of Resistance.”

Among the featured speakers and panelists is Crystal Ketterhagen, described as a core organizer for Indivisible Madison. It’s part of the phony “grassroots” national Indivisible movement created by well-connected Democrats and reportedly funded by some of the most affluent liberal sugar daddies in politics. Indivisible lives under the hashtag #TheResistance and its main objective is to make life really hard for President Trump and anyone else daring to even think about limiting the size of our morbidly obese government.

Social Justice activist Kali Akuno, a panelist for a discussion on “Understanding the Current Crisis,” has further articulated what resistance means to his movement. Akuno told alt-left publication Alternet in December how to “prepare to be ungovernable in 2017.”

“A core component of resistance is to get the class of civil servants, particularly on the federal but also the state level, to not comply with arbitrary laws and policies that are going to be created,” he said in an interview. “There is no need for anyone to comply. Let’s not give it legitimacy just because it’s the law. We need to be prepared to disobey and engage in civil disobedience.”

“We cannot and should not legitimize the transfer of authority to a right-wing populist who has neofascist orientations. We shouldn’t legitimize that rule in any form or fashion. We need to build a program of being ungovernable,” Akuno added.

The conference also will feature Deepa Kumar, an associate professor of media studies and Middle Eastern studies at Rutgers University. Kumar became the source of national controversy when she took to Twitter and compared ISIS to the United States.

“Yes ISIS is brutal, but US is more so, 1.3 million killed in Iraq, Afghanistan and Pakistan,” Kumar tweeted.

The professor took cover under the First Amendment umbrella. In 2014, Kumar joined other liberals in decrying former Secretary of State Condoleeza Rice’s invitation to give the commencement address at Rutgers. Rice ultimately declined the offer, under intense pressure. Kumar tweeted, “We won.” Apparently Ms. Rice’s ideas weren’t covered under the same First Amendment.

Some old liberal favorites will be at this conference of radicals, too. Like Joel Rogers. The University of Wisconsin professor of Law, Political Science, Public Affairs and Sociology also directs the Center on Wisconsin Strategy, the remarkable COWS. The center is a left-leaning think tank located on the UW-Madison campus. (It is interesting to note liberals of late have been going crazy over a proposed public-policy innovation center on campus named after former Wisconsin Republican Gov. Tommy Thompson. They fear it would be a conservative think tank).

Rogers has gotten a lot of love over the years from progressives and their friends in the mainstream media. But in April 2002, seven months after the September 11, 2001 terrorists attacks, Rogers was attacking President George W. Bush and his administration as “criminals” and “ruthless” and “evil motherf***ers.”

“They (Bush and his supporters) stole the presidency. Now they’re in the process of stealing the rest of the country. They wish to enthrall us and embark on another 40-year war …They’re cruel. They are vicious. They have no shame. They are criminals, basically, who are in the land, running it and choking the breath of conscience and good cheer. Or in social science expression, they are ruthless motherf***ers. Whatever their cheerful demeanor, I think we should keep that in mind. These people are bad. I don’t use the word ‘evil’ loosely. “Let’s use it now. Let’s call them ‘evil motherf***ers.’ They are really bad people. They are taking apart the country.”

The more things change, well…Fifteen years later you are likely to hear more of the same kind of rhetoric about the current president, his administration, and the people who voted for Trump, at Madison’s latest radical festival.

Organizers of Forward 2017 have long insisted that no taxpayer money goes into the annual conference. The event, they say, is held off campus for starters.

“We’ve always done it the same way. It’s financed out of the proceeds,” said Patrick Barrett, administrative director of the Havens Center.

But there’s a lot of emailing from university addresses and event preparation on the clock, according to documents obtained by MacIver News Service through a state open records request.

Barrett acknowledged as much, calling it part of the center’s “organizational mission.”

Asked if any capitalists will be attending the radical gathering, Barrett said it was hard to say.

“I really don’t know how everyone participating in this would characterize their perspective,” he said. “Some might find themselves comfortable fitting into that category, and there are others that are not.”