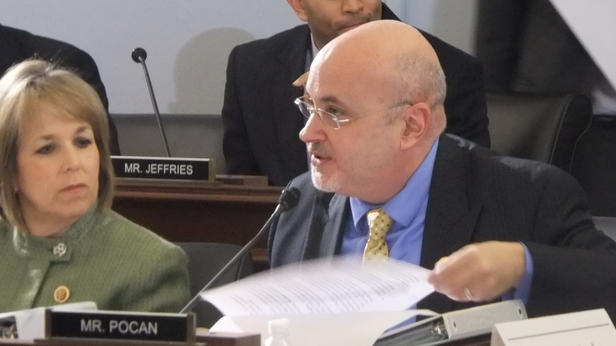 UPDATE: Rep. Mark Pocan skipped the anti-Israel forum on Capitol Hill that he sponsored, the Washington Free Beacon is reporting.

The Madison liberal, an openly gay member of the House, has been a crusader against bigotry and hate speech. At the same time, Pocan has been an unapologetic supporter of organizations viewed as not simply anti-Israel but anti-Semitic by mainstream Jewish groups.

Pocan had anonymously reserved space on the Hill for the event before the Free Beacon disclosed his identity. He was not seen at the Thursday morning forum, titled “50 Years of Israeli Military Occupation & Life for Palestinian Children.”

Adam Kredo reported the event was not attended by a single member of Congress, and that Pocan’s absence was noted.

“With all due respect, Congressman Pocan is a coward,” one senior congressional official who has been tracking the situation told the Free Beacon’s Kredo. “If you’re going to sponsor anti-Israel propaganda, at least have the dignity to take responsibility for it.”

Yes, according to an expose Friday by the Washington Free Beacon’s Adam Kredo.

Pocan, the Madison liberal who has railed against anonymity in so-called “dark money” politics, is anonymously sponsoring the forum of several organizations that support boycotts of the Jewish state, congressional sources told the Free Beacon.

“Pocan, a supporter of the liberal Middle East advocacy group J Street, has come under fire in the past for meeting with convicted terrorist associated with the Popular Front for the Liberation of Palestine, a terror organization,” Kredo wrote. “Since the Free Beacon first reported on the event–which many have described as a propaganda effort meant to defame the Jewish state–pressure has been mounting for the anonymous congressman behind the event to step forward.”

The “congressional briefing,” as this meeting of Israel bashers is described, is officially titled “50 years of Military Occupation & Life for Palestinian Children.”

“Panelists will examine how persistent grave human rights violations, systemic impunity, discrimination, and a hyper-militarized environment affect the lives of the Palestinian children growing up under a military occupation with no end in sight,” the “congressional briefing” literature notes.

Pocan’s office has not responded to several requests for comment by the Free Beacon.

Kredo, who spoke to MacIver News Monday on the Boycott, Divestment, Sanctions, to “end international support of Israel’s oppression of Palestinians and pressure Israel to comply with international law.”

In other words, a movement that supports groups that believe Israel doesn’t have a fundamental right to exist. It is a campaign based on phony “facts” and propaganda, disputed and rebuked on many fronts. It draws its inspiration from the United Nation’s top human rights body, an anti-Israel panel that has the temerity to declare Israel the worst human rights violator in the world. *Note to U.N.: See Syria, Iran, Yemen and an array of Middle East countries proclaiming “Death to Israel” and attempting to carry out that murderous decree.

Perhaps it should come as little surprise that Pocan is affiliated with the anti-Israel movement. In November the Weekly Standard reported five U.S. congressmen, including Pocan met with Shawan Jabarin last spring. Jabarin reportedly is tied to recognized terrorist organization, the Popular Front for the Liberation of Palestine (PFLP).

The expenditure document notes that Pocan, “Met with Palestinian officials and business and community leaders to learn more about the regional economy, politics and culture” – at a taxpayer cost of $12,250.

Pocan and his colleagues met in May with Jabarin, whose terrorist group “has engaged in suicide bombings, assassinations and plane hijackings,” according to the Weekly Standard story. “Jabarin serves as director of the Palestinian human rights organization Al Haq, which advocates for economic boycotts of Israel and exploits courts to delegitimize the country, according to NGO Monitor, a pro-Israel watchdog.”

Pocan is a big supporter – and benefactor – of J Street, a George Soros-funded anti-Israel group that bills itself as a home for “pro-Israel, pro-peace Americans.” So is Pocan’s 2nd Congressional District predecessor, U.S. Sen. Tammy Baldwin (D-Madison).

As Sen. Marco Rubio (R-Fla) noted earlier this year, J Street in 2015 “invited the chief Palestinian negotiator (Saeb) Erekat to address their conference, a person who has justified the murder of Jews as self-defense …”

“Not long after attending (J-Street’s) conference, Erekat called on the Palestinian Authority to support lone-wolf Palestinian-Arab terrorist attacks against Jews, called for rejecting a future Jewish state, and called for cooperating with genocidal terrorist organizations like Hamas and Palestinian Islamic Jihad,” noted the Daily Wire.

U.S. Rep. Peter Roskam (R.-Ill.), a vocal defender of Israel, told MacIver News it is “troubling that groups espousing the insidious BDS movement would be given a forum in this fashion.”

“The movement seeks to delegitimize Israel and is nothing short of economic warfare against a strong ally of the American people,” Roskam said in a statement.

And taxpayers again will have to foot the bill for the Pocan-sponsored anti-Israel forum on the Hill.

“The main takeaway from this is, your representative is supposed to represent your interests. A majority of Americans support the state of Israel and do not support anti-Israel activities, particularly on Capital Hill and by their members of Congress,” the Free Beacon’s Kredo said. “This is an affront to those who would say there is no place for this kind of thing.”