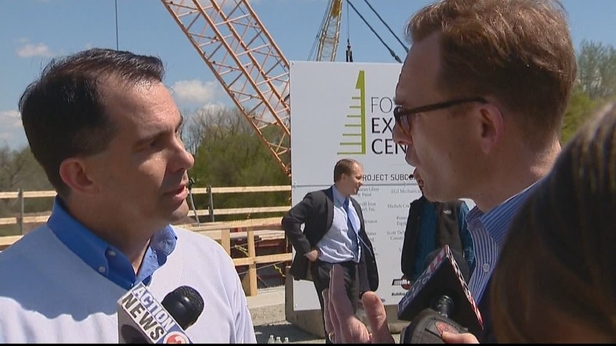 Jessie Opoien of the Capital Times reported Tuesday Outagamie County Executive Tom Nelson, D-Kaukauna, is using his May run-in with Governor Scott Walker for fundraising purposes. Nelson was attempting to ambush Walker at a tourism event over the Republican American Health Care Act.

“Just to be clear,” Walker said to the press. “The county executive wants to take away from tourism right now and play a political stunt about a topic that has nothing to do with what we’re talking about today. It’s on an issue that was voted on in the House of Representatives but is not even, not even going forward in the Senate right now.”

“We’ll take a look at it when it goes to the United States Senate,” Walker said. “We’re going to lobby in a way that allows us to do the things we’ve done here in the state of Wisconsin.”

Walker reminded the press and Nelson that when he was the state Assembly majority leader under Governor Jim Doyle, the state’s Medicaid program, BadgerCare, had a waiting list of 43,000 people wanting health care coverage.

“For the first time in the history of our state, we cover everyone living (in poverty) with Medicaid,” Walker said. “Something we didn’t do, Tom, when you served in the Legislature. There was a waiting list…”

“Do you support the legislation?” Nelson interrupted to ask, referring to the American Health Care Act (AHCA).

“You can make up the facts,” Walker said to Nelson as he shook his head back.

Nelson then tried to bring up taking the Obamacare federal money to expand Medicaid. “You have sent to other states hundreds of millions of dollars for Medicaid expansion that could take care of everything from the opiate crisis that we are dealing with to health insurance for those individuals who are…,” Nelson said before he was interrupted by Walker, who reminded Nelson that he lost in November a race for Congress, 63 percent to 37 percent, in what was once one of the most competitive seats in the country.

But aside from how awful it looked for Nelson, he was simply wrong about Medicaid expansion. Walker is not sending money to other states, President Barack Obama did. And the money Obama sent was borrowed from future generations. The national debt is close to $20 trillion and getting bigger every day.

Turning down the extra Obamacare funding is not sending money to other states. It’s causing the federal government to borrow less money. The Legislative Fiscal Bureau said in an April memo that Wisconsin could “save” $380 million over the next biennium. However, the federal government would actually spend over $1 billion to achieve that “savings,” or an actual net loss to the taxpayers of $694.5 million.

Nor can the Obamacare money just be spent however Nelson wants. The money to which Nelson refers is for Medicaid coverage of childless adults up to 133 percent of the federal poverty line. Until 2017, the federal matching for that coverage was 100 percent. Now it drops to 95 percent with Wisconsin taxpayers on the hook for the rest, and it gets worse until it drops to 90 percent in 2020.

That’s under the current law. As Walker and other Republicans have been warning, that federal matching will be a target of a cost-saving Congress. Traditional Medicaid reimbursement is actually closer to 60 percent, and the 31 states that have expanded Medicaid with the Obamacare money may have a serious budget hole to fill. Signing onto Medicaid expansion now is like buying an expensive ticket to ride the Titanic – after it hit the iceberg.

Walker successfully avoided that fiscal trap despite substantial political pressure, the clamor of editorial boards across the state, and continued efforts of Democrats like Nelson. So it’s interesting that Nelson thinks he can fundraise off the confrontation with Walker. The policies he supports are already costing taxpayers a lot of money, and would only cost more.