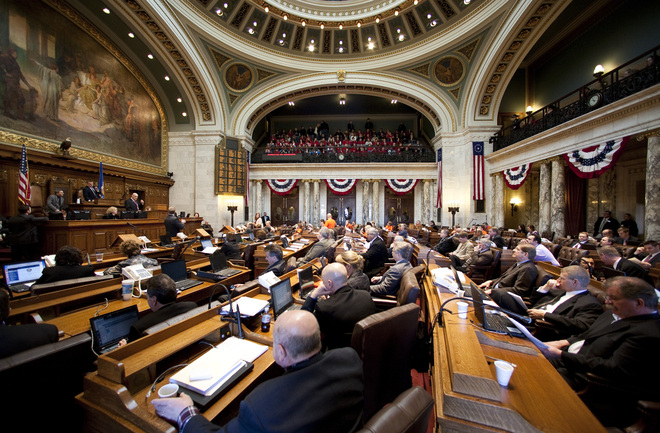 [Madison, Wis…] – On a day when their federal legislative brethren were targeted by a crazed gunman, state lawmakers on both sides of the aisle urged a return to civility, to comity, a “sense of fellowship” in these bitterly divided times.

The kinder, gentler Legislature lasted for all of an hour.

Wednesday’s Assembly floor session began with some conciliatory words from Assembly Speaker Robin Vos (R-Rochester) and Minority Leader Peter Barca (D-Kenosha) and a moment of silence for U.S. House Majority Whip Steve Scalise and four others who were injured earlier in the day when a gunmen opened fire at an Alexandria, Va. baseball field.

“Today is a sad day for our entire nation,” Barca said. “I am hoping today we can rededicate ourselves to set a shining example of how we might disagree on policy but still have a sense of comity and a sense of fellowship.”

But Assembly members were soon back to the name-calling and overheated rhetoric all too familiar in today’s politics. When the feel-good resolutions ended and the debate over Article V began, the gloves came off. Democrats accused Republican sponsors of Article V resolutions of secretly plotting to obliterate the Constitution under the guise of participating in a states-run convention to craft a federal balanced budget amendment.

“I don’t think this resolution or these resolutions are before us because people want to pass a balanced budget amendment. That’s a facade in order to debate this and put a pretty face on this …I think there is a much more nefarious purpose,” said Rep. Fred Kessler, D-Milwaukee.

According to Kessler and a long line of his liberal colleagues, “extreme right-wing groups” want to “repeal many of the amendments in the Bill of Rights.” The ultimate reason? To disenfranchise certain groups of voters and set voting rights back 150 years, Kessler contends.

Republicans shot back that their friends on the left were engaging in fear-mongering. The point of the resolutions, they said, is to give Wisconsin a seat at the table of a historic constitutional process that specifically would demand the federal government to get its fiscal house in order and begin dealing with $20 trillion in crippling U.S. debt.

“This legislation states we will follow the rules. Our intentions are not nefarious in any way, shape or form,” said Rep. Kathy Bernier (R-Lake Hallie), who shepherded compromise legislation to bring on board reluctant conservatives also concerned about a “runaway convention.”

After hours of bitter rhetoric amid the call for “comity,” the resolutions passed along party lines.

Reunited And it Feels So Good

Warring Republican leadership in the Assembly and Senate seemed to be showing signs of detente, however.

Vos said he had a “good conversation” Tuesday with Gov. Scott Walker and Senate Majority Leader Scott Fitzgerald, R-Juneau. The Senate has been more aligned with Walker’s budget plan than with the Assembly’s proposals, particularly on the divisive issues of transportation and education spending.

“I know the Senate has been meeting on a regular basis, which is great,” Vos said. “Many times during the process we would have a hearing scheduled for Joint Finance and then we’d have to stop because the Senate didn’t know exactly where they were. I give them credit for the fact that they’ve taken this whole last week and caucused a lot and talked a lot and have more concrete ideas on where they want to go, and I think that this will help the process go along.”

But reconciliation, even for a Republican majority that has held both houses of the Legislature for six-plus years, comes with baggage.

Nygren pointed to the Assembly education plan and Fitzgerald’s rejection of it moments before the plan’s release earlier this month.

“Originally Sen. Fitzgerald sent out a press release before we even released it saying it was dead on arrival,” the Marinette Republican said.

In recent days, however, Republicans in the Senate and the Assembly have been talking more about the inequities of the 25-year-old state education funding formula and the impact it has had on low-spending school districts, Nygren added.

Any notion of an intraparty feud is undercut by the fact that Republicans are arguing about how much more money to put into schools, and how much more to cut property taxes.

“That’s a pretty good day to be in a place when you’re having those types of conversations,” the lawmaker said. “I would just suggest that putting out ideas, as we have on a couple different occasions, is part of our DNA in the Assembly.”

Wednesday was a great day for limited-government advocates. The Assembly, on a party-line vote, passed the REINS Act, making Wisconsin the first state in the nation to pass the legislation demanding greater oversight of state bureaucratic rule-makers. The Regulations from the Executive in Need of Scrutiny, commonly known as the REINS Act, passed in the Senate last month, and now awaits the governor’s signature. Walker originally had included the measure in his budget proposal.

The REINS bill is similar to legislation moving through Congress, but with lower thresholds. It provides greater legislative oversight of the regulations adopted by state agencies. Any rule or regulation with an economic impact of more than $10 million would require legislative approval.

“Well it took 3 years and a lot of work, but Wisconsin just became the first state in the country to pass the #REINS Act through both houses,” state Rep. Adam Neylon, R-Waukesha, tweeted Wednesday evening.

Capitol security was front of mind in the hours after the D.C. shooting.

The House’s Scalise, R-Louisiana, was with other congressional members, practicing for a charity baseball game between Republicans and Democrats. Assailant James Hodgkinson reportedly fired more than 50 rounds from a rifle and a handgun.

Hodgkinson was a volunteer for U.S. Sen. Bernie Sanders’ presidential campaign, according to media reports, and had a hostile view toward Republicans, particularly Trump.

“Hodgkinson had sent letters to his local newspaper in Illinois decrying income inequality, encouraging the government to tax the rich and supporting President Obama, according to the Belleville (Ill.) News-Democrat,” the Washington Post reported.

Vos said state Capitol police did ramp up security in light of the events in Washington, D.C., not due to any threats. Asked whether officials have considered tighter security at the state Capitol, Vos said his “natural assumption” is the people’s house should be as open as possible.

“That’s why I’m not supportive of having armed guards, metal detectors, or any of those kinds of things because I think by and large we have a really good Capitol police force who has provided us security under the most intense times,” the speaker said, referring to the left-led protests against Walker’s Act 10 legislation in 2011.

Vos said the overheated political rhetoric, particularly in the Trump era, is only exacerbating the divide – and potentially making it deadly.

“I think that’s the problem that we have in society today. Some people can’t accept the fact that somebody has just a different point of view. That doesn’t make them illegitimate or evil or hateful, they just have a different point of view,” the speaker said. “So I hope that what we get out of today is more respectful rhetoric, to say you can believe whatever you choose to believe because we live in America.

“But you don’t have the right to stop somebody else from believing what they believe because you don’t like it, which is what, unfortunately, seems like this person attempted to do.”