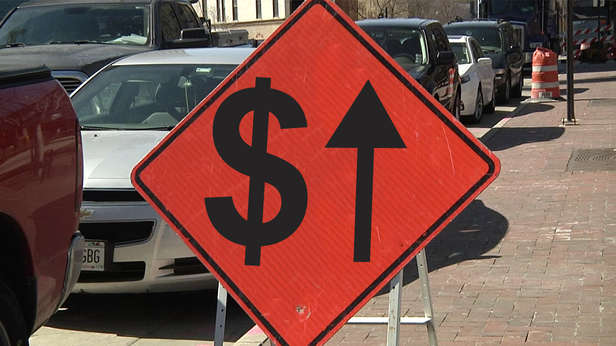 The Joint Committee on Finance is considering almost a dozen different tax and fee increases to boost transportation funding, according to Fiscal Bureau memos released Thursday.

The Fiscal Bureau laid out 11 options for transportation fund revenue raisers “that have been the subject of frequent legislative inquiry” over the past year.

The first option would increase the state sales tax from 5 to 5.5 percent. That extra .5 percent would go into the transportation fund. The Legislative Fiscal Bureau estimates that would bring in $960 million over the biennium.

The second option would be to apply the current 5 percent sales tax to gas purchases. LFB estimates that would bring in $660 million.

Option three raises the gas tax by 1 cent per gallon, and would bring in $64.4 million over the biennium.

JFC is also considering indexing the gas tax. That would tie it to inflation, and bring in $29.5 million over the biennium.

Indexing the gas tax ended in 2006. Another option would raise the gas tax by 7 cents a gallon, because LFB says that’s how much it would have risen if indexing never went away. That would raise $450.9 million.

JFC could also start applying the gas tax to vehicles used for farming. That would bring in $71.4 million.

Lawmakers are also considering raising vehicle registration fees. Right now annual registration costs $75 in Wisconsin. The JFC proposal would change that to a mileage-based system, where drivers are charged 1.02 cents for every mile they travel throughout the year. That would mean a $102 registration fee for motorists who drive 10,000 miles in a year.

Another JFC idea is a highway user fee, which would be charged when purchasing a new vehicle in addition to the title fee. This fee would be 2.5 percent of MSRP. LFB estimates it would bring in $414.9 million.

Lawmakers might create a $50 fee for hybrids and electric vehicles. That would raise $7.1 million over the biennium.

JFC might also change the way Wisconsin collects vehicle registration fees. States like Iowa, Michigan, and Minnesota charge fees based on a vehicle’s original MSRP. That means a driver in Minnesota with a new $20,000 vehicle is paying $271 for registration. In Iowa registration would cost $214. LFB says this proposal could bring in another $13 million in fiscal year 2018.

Finally, JFC is considering raising Wisconsin’s title fees by $5. Currently those fees are $69.50. That could raise another $12.6 million over the biennium.

Ultimately, JFC might decide to reject the options, but the LFB memo indicates there is some interest in at least considering them.

Walker has stated he will veto any tax or fee increase in the budget.