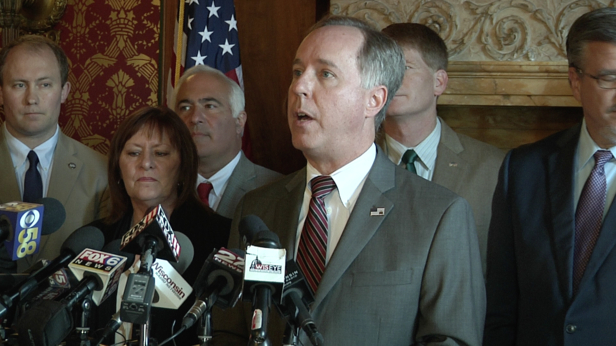 [Madison, Wis…] Senate Republicans caucused Tuesday. Assembly leadership planned a road trip. And the Joint Finance Committee may meet next week – but then again, it might not.

Such is the rift, sources say, in Republican budget land between the Assembly and the Senate and Gov. Scott Walker and the Assembly.

JFC co-chairwoman, Sen. Alberta Darling, said the Senate Finance Committee continues to meet and work through the Legislative Fiscal Bureau’s agency documents – “everything but transportation and taxes.” Nobody seemingly wants to touch the mess that is transportation, even as Walker tours Department of Transportation roadside projects doing his best Larry the Cable Guy in urging lawmakers to, “Get it done.” The “it,” of course, is the state biennial budget.

Talk of lawmakers breaking out transportation from the full state budget isn’t sitting well with Walker, who asserts his transpo plan will do just fine, thank you very much. The Assembly has put forward alternative transportation and education proposals. The Senate is standing by Walker’s education plan and, it appears, the governor’s budget blueprint in general.

“We will continue to look for ways to support low spending districts, but a proposal that raises property taxes and picks winners and losers within our school districts is a move away from the position of both the Governor and the Senate Republican caucus,” the Juneau Republican said. “The Assembly package that was endorsed today is simply not the direction that the budget is headed.”

“I know Gov. Walker can be flexible when good ideas are put out there, and that’s why I think it’s important for us to go and talk about this plan,” the Rochester Republican said Tuesday at a press conference, surrounded by Assembly Republicans.

Vos wants to send authors of the Assembly plan out on the road next week to talk about the plan, build support for it. Doing so is a better option, he said in a salvo fired at the Senate, than negotiating “in some back-room deal where nobody even knows what’s in the plan.”

Dispatching key lawmakers to sell an education package wouldn’t seem to bode well for the prospects of the Joint Finance Committee getting back to business next week.

Unless something dramatically changes, the JFC will not meet this week, as originally scheduled. Asked whether she thought the Republican-controlled committee would get back to work next week, Darling noncommittally said, “I hope so.”

“I don’t know what the value of that is going to be. I think people want us to get to work, to stay at the Capitol and do our jobs,” Vukmir told MacIver News. She said the Assembly education plan is “off the mark” and she cannot support it. “Our conservative voters want us to decrease property taxes. They don’t want to increase revenues, through gas taxes or otherwise. What I’m hearing is they don’t want us to pick winners and losers in education.”

Vukmir said the Senate would continue to go about its work. Its positions are more in line with the governor’s budget plan than with the Assembly, she said.

Speculation is the Republican-controlled Assembly and the Republican-majority Senate may have to release competing budget plans. Vukmir said it’s too early to say whether that possibility will come to pass. It would be unprecedented.

“I think we’ll have to wait and see. I trust our leaders to work this part out,” she said. “But hitting the road during the middle of a budget session sounds a little familiar to me, and I don’t think that will sit well with a lot of our constituents … I hope it makes our constituents speak up and tell them to get back to work.”