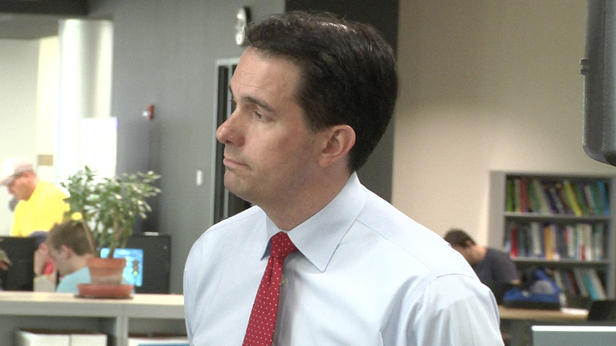 Madison, Wis…] – Gov. Scott Walker and members of his administration are firing back at Republicans who have all but declared the governor’s self-insurance plan dead on arrival.

A key Walker administration official tells MacIver News Service that lawmakers and insurers have been engaging in “fear mongering” and the Legislature will have a hard time explaining to taxpayers why they are “leaving $60 million in savings on the table.”

“It’s a step in the wrong direction if they go down this path,” Walker said of the Republican-controlled Joint Finance Committee during an interview Wednesday with conservative talk show host Vicki McKenna.

“Why would you walk away from $60 million in proven savings out there when you’ve got people wanting to spend more money on transportation,” Walker added during the interview on NewsTalk 1310 WIBA in Madison. “At a time when they’re looking for money it seems like walking away from $60 million is ridiculous.”

The governor used his radio address Thursday to take the same message to the public.

Walker in recent days has ramped up his rhetorical campaign in an effort save one of his more ambitious biennial budget proposals from the sharp knife of the powerful budget-writing committee.

Top administration officials have been hammering home the message that moving some 250,000 state employees to a self-insurance model would be a huge savings for taxpayers while maintaining quality health care for enrollees.

Plan critics, particularly Wisconsin’s insurance lobby and some of their allies in the Legislature, insist Walker’s idea is risky and could disrupt and damage the state’s robust health insurance marketplace.

Michael Heifetz, the state’s Medicaid director and administrator of the Division of Healthcare Access and Accountability, blasted what he called the fear mongering surrounding the governor’s proposal.

Heifetz also is a member of the state Group Insurance Board, which in February voted 10-to-1 in support of the self-insurance switch.

“These complaints are not grounded in the facts that the Group Insurance Board and the governor have looked into,” Heifetz told MacIver News Service Thursday morning on the Dan Conry Show. “There’s a lot of fear mongering on this issue and it’s intentional.”

Self-insurance isn’t some “wild-eyed idea,” Walker said. As MacIver News Service has reported, at least 20 states completely self-fund their state employee health plans, including Minnesota, which moved to 100 percent self-funded insurance in 2002. Also, 46 states use self-insurance in some way, including Wisconsin.

On Monday, the Group Insurance Board submitted contracts with third-party administrators for a self-insurance system. Those contracts spell out in black and white at least $60 million in savings over the biennium – that’s on top of $22 million in possible savings depending on happens with Obamacare. With the contracts in hand, JFC has less than three weeks to convene a meeting and make a decision.

Previously, consultants contracted by the state have estimated self-insurance could save $42 million a year, but it could cost as much as $100 million, depending on a range of variables. Employee union leaders say this is no time to roll out an “unpredictable” model of health insurance.

JFC co-chairman, Rep. John Nygren, R-Marinette, said the budget committee isn’t saying no to saving money, even if rejects the governor’s plan. He said the JFC is looking for health savings through other means.

The question is, if savings can now be wrung out of the state’s health insurance plan, couldn’t they have been realized all along?

Rep. Bob Gannon, R-West Bend, said Wisconsin has a three-decade-old health plan design in need of fixing. Gannon, owner of an independent insurance agency, said insurers are not in this world to lose money. They have a profit incentive, which is fine, Gannon said, but it stands at odds with the state’s mission to protect taxpayers.

Heifetz, the Medicaid director, was even more blunt.

“There are some special interersts involed who are doing very well off of the current system,” he said. “Everyone wants health care costs controlled. The governor has made a very simple proposal to start doing that. So it’s very surprising that there’s this level of objection to save taxpayers money.”