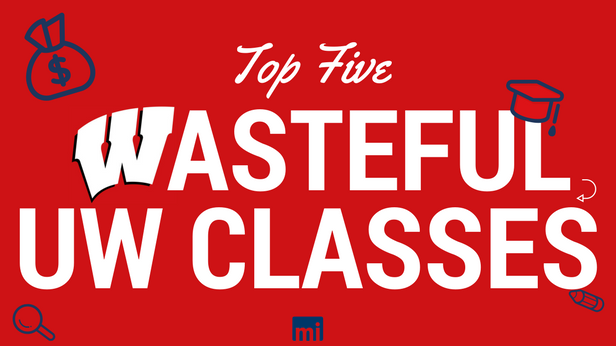 Here at the MacIver Institute, we’re dedicated to keeping you – the taxpayer – informed about wasteful spending at all levels of government. If you look closely, you can find questionable line items and waste in just about any arm of government. That’s why we’re skeptical of the constant drumbeat for higher taxes, bigger government, and of course, more and more spending.

Considering the UW System’s never-ending cycle of demands for more state funding, one would hope that they are responsibly spending your tax dollars before they ask for more.

The MacIver Institute decided to dive deeper into the UW system to find places where frivolous spending runs rampant and where cost savings can be found. Our first stop: course offerings in the UW System.

What we found were courses that degrade capitalism, praise Marxism and encourage a “social justice warrior” ideology. We wonder how many employers in the real world are looking to see if you took a class in how to be perpetually aggrieved or permanently pissed at the world?

Check out our list of the Top Five Wasteful Classes in the UW System to see if your school made the cut! We start with number five and make our way to the single most wasteful class in the UW System.

We start with this philosophy course offered at UW-Superior, which trains the teachers of tomorrow in social justice ideology. One of the main goals of the course is for students to reflect on their privilege and marginalization. Students also review how meritocracy – and the American Dream – is a myth. Why work hard to achieve your dreams if you can blame sex/race/class/sexuality for your lack of success?

A portion of the participation grade is based on whether or not students were inclusive and supported other students expressing their thoughts. This is college, not charm school – and these students (and taxpayers!) are essentially paying hundreds of dollars for a course on how to be nice to people.

For the course final, students write a 5-6 page paper about the purpose of education, why an education is valuable, and related topics. This is ironic considering the course itself provides little real value to the students enrolled.

One of the required readings, Chad Kautzer’s “Radical Philosophy: An Introduction,” reviews Marxism, feminism, queer theory, and more. Students are asked to call upon this book for the group presentation, which makes up 15 percent of the total grade.

4. The History and Politics of Hip Hop – UW-Platteville

This course satisfies the Ethnic Studies requirement for graduation (ETHNSTDY 2100) and focuses on hip hop as a “cultural phenomenon that has influenced America and the entire world.” Throughout the course, students explore the origins, political economy, and global and domestic influence of hip hop.

This course obviously appeals to college students (who doesn’t love hip hop?), but it is a reach to claim that the course merits public funding. How does the UW System have the audacity to ask for more money if they still offer courses like this?

Similar to the controversial UW-Madison course “The Problem with Whiteness,” this course (ERS 325) operates under the assumption that all white people are racist, but most just haven’t realized it yet. Course objectives include confronting personal denials of white privilege, developing strategies to confront racism, and “deconstructing the conscious and unconscious ways white privilege shapes our views, thoughts, and actions.”

Students complete a “What Does It Mean to Be White?” project (10 percent of the final grade) for which they take photos of at least five different “concepts related to whiteness,” interview someone to document “what it means to be white,” and synthesize their work into a 4-6 page analysis.

The professor, Dr. Audrey Elegbede, writes in the course syllabus that while students are “expected to understand the ideas and arguments presented…this does not mean that they are expected to agree with all of the points of view discussed.”

Our next finalist for wasteful UW classes brings us to the Women’s Studies department at Eau Claire. The Culture of Third Wave Feminism (WMNS 210) fulfills two of the Liberal Education Core Learning Outcomes required for graduation.

For one class assignment, students perform a “positive, pro-feminist act” and share with the class – for 10 percent of the final grade. But sure, the UW is stretched thin.

Other assignments include watching an episode of Sex and the City and reading about “lumbersexuality” – defined by Urban Dictionary as a metrosexual man posing to be a rugged lumberjack in order to “capture lost or missing masculinity due to being emasculated by things such as his childhood environment.”

The course also delves into white privilege and students are required to attend a “Recognizing Privilege” workshop, watch videos like “How Privileged Are You?,” and take the “Privilege Test” on Buzzfeed. That’s right, this professor thinks a Buzzfeed quiz is the most appropriate medium to further the students critical thinking and reasoning skills.

But sure – there’s absolutely no room to absorb cuts at the UW. None at all.

That brings us to our number one most wasteful class in the UW System. Drumroll, please…

1. Class, State, and Ideology: An Introduction to Social Science in the Marxist Tradition – UW-Madison

In first place – the UW System’s most wasteful class – is this graduate level course (SOC 621) taught by the infamous Dr. Erik Olin Wright. The syllabus – 31 pages long with over 40 pages of supplementary topics – details how capitalism is evil and highlights the Marxist terms and concepts the students will review over the course of the semester.

Students are taught that the point of Marxism is to “transform the world in ways that increase the possibility of human emancipation.” Is that why people desperately flee socialist and communist countries to the safe haven of their capitalist counterparts?

Topics to be covered include the “analysis of gender relations and male domination,” “socialism and emancipation,” and Marxist class analysis. Throughout the syllabus, Dr. Wright attacks capitalism in a way typical of socialists.

He alleges that capitalism is environmentally destructive and “irrational in ways that hurt nearly everyone.” At one point, Wright argues that Marxism is both gender and race blind, yet later he calls out white capitalists specifically:

This one-sided account of capitalism seems to ignore all of the benefits reaped throughout the centuries thanks to capitalism and the free market. Wright argues that the free market causes people to suffer for no fault of their own, when in reality it causes people to flourish. Capitalism has saved and improved millions of lives through the innovation of products and services such as solar powered food dehydrators, water purification straws, refrigerators, penicillin, airplanes, and Uber. What are the chances these successes are accredited to capitalism in this course? My bet is slim to none.

One common critique by students in the course is that it’s less about Marxism and more about “Wrightism,” as Dr. Wright specifically refers to all other forms of Marxism that he doesn’t study as “alternative perspectives” that simply hinder his course structure.

The students sit in class with their laptops open, with a textbook they bought from Amazon on the desk in front of them, holding a Starbucks coffee in one hand and an iPhone in the other. Maybe the irony is lost on them?

Why does this matter? While some students may be unfazed by these courses, which many would consider an easy A for their transcript, it is important to remember that the taxpayers are funding the UW students’ education. If passed today, Gov. Scott Walker’s 2017-19 budget proposal would send $2.2 billion in state funding to the UW System.

Offering courses that ignore the prosperity created by capitalism and cover absurd topics such as “lumbersexuality” is not only a disservice to the students paying thousands of dollars to attend a university, but is also a slap in the face to the hardworking Wisconsin taxpayers whose money goes to waste on courses that do not have a direct, positive impact on society.

It is shameful for the UW System to ask the people of Wisconsin for more funding if they have not considered all of the cost savings opportunities, such as eliminating these courses, first.

Know of other wasteful or useless courses in the UW System? Comment them down below!