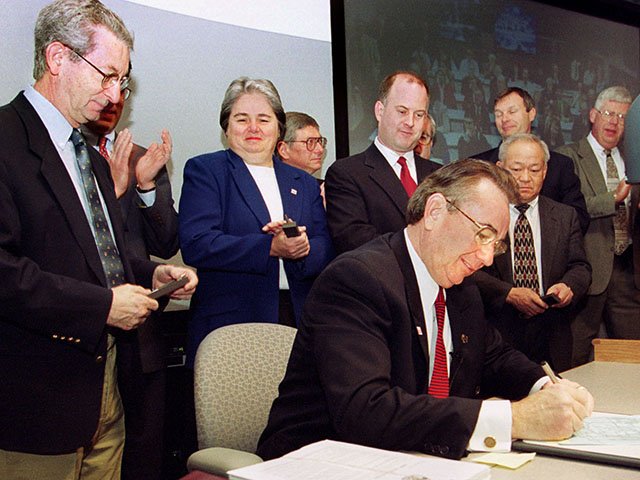 [Madison, Wis…] – Kelli Thompson learned the art of politics and the necessity of hard work from one of the great American political masters – her father.

Thompson, daughter of the legendary Tommy G. Thompson, Wisconsin’s longest serving governor who redefined political and public policy expectations, said her father has always loved people, the state of Wisconsin, and the thrill of a good fight.

Those qualities are what made Tommy, well, Tommy – the conservative who once won the liberal bastions of Dane County and the city of Milwaukee in his gubernatorial reelection bids.

“It was never a job to him,” Kelli Thompson told MacIver News Service in an interview last week. “I think it was how he was brought up. He never was told anything but you have to work really, really hard. If you want it and you love it, you still have to work really hard. Nothing is going to be handed to you, nothing is going to be given to you easily.”

That is how the former governor approached governing sans Republican majorities in the Legislature. It’s how he approached bringing diametrically opposed groups to the table to tackle education funding reform and in pioneering school vouchers and parental choice. And the idea that nothing is handed to you definitely is how Thompson approached ground-breaking welfare reform. More than 20 years ago Thompson signed into law a sweeping package of initiatives that set the pace for the federal welfare reform that followed.

Last week, policymakers present and past turned out to a Capitol symposium addressing the Republican’s governing legacy. It was part of Tommy@30, a series of events this year marking the 30th anniversary of Thompson’s first inauguration as governor. More so, the celebration is designed to take a closer look at what Tommy@30 chairman James Klauser describes as the “secret sauce” that made Thompson “one of the most innovative governors in the nation’s recent history.”

Klauser, Thompson’s Department of Administration secretary and one of his closest advisors, was among several Thompson administration alumni at the symposium.

“You couldn’t really complain about how hard you were working because he was working harder than you,” said symposium panelist Bob Trunzo, commerce secretary under Thompson.

Trunzo, who these days serves as president and CEO of CUNA Mutual Group, recalled the long days in 1989 when the Thompson administration hammered out an incentives package that kept General Motors in Janesville. The Milwaukee Sentinel billed the much-maligned deal as corporate welfare but Trunzo said the job-training money for the plant retooling project meant thousands of good-paying jobs for southern Wisconsin for nearly two decades. GM eventually did pull out and the plant closed in 2009.

When Thompson was first elected governor in 1986, Wisconsin was still shaking off the economic malaise of an early 1980s recession that saw significantly higher unemployment and soaring interest rates than did the so-called Great Recession nearly a decade ago. For most of the period from the 1970s until just before Thompson took the reins as governor, Wisconsin’s unemployment rate was higher than the nation – often considerably higher, Ward said.

The Republican reformer did inherit an economy on the upswing, an economy that mostly stayed up over Thompson’s tenure. Ward and others who worked with Thompson acknowledged the governor was the benefactor of good luck, but this hard-working governor practiced what Roman philosopher Seneca preached: “Luck is what happens when preparation meets opportunity.”

Opportunity arrived in the form of ever rising caseloads of the dysfunctional welfare system known as Aid to Families with Dependent Children (AFDC). Thompson campaigned for governor in 1986 on a promise of cutting into those caseload numbers, at around 100,000 recipients during his first year in office. Wisconsin had the fourth-highest AFDC rate in the country, recalled Mike Flaherty, who covered Thompson and welfare reform for the Wisconsin State Journal in the 1990s.

Thompson followed through on his campaign promise with one of the more impactful and far-reaching public policy changes in U.S. history.

“Upon taking office, Thompson initiated a series of reforms that cut welfare dependency during the late 1980s and blocked any resurgence during the 1990-93 recession,” wrote Robert Rector, Senior Research Fellow at the Heritage Foundation in a March 1997 perspective piece titled, “Wisconsin’s Welfare Miracle.”

“Starting in 1994, a second round of more sophisticated work-related reforms has caused the caseload to nosedive further,” Rector continued.

By the time he left the governor’s office in 2001 to become Health and Human Services secretary for President George W. Bush, the state had reduced its welfare roles by 93 percent “while putting an emphasis on putting people to work,” according to a May 2007 AP story.

The Thompson economy, former staffers and lawmakers said, served as a launching pad for what would become W-2, or Wisconsin Works. Wisconsin in 1997 became the first state in the nation to implement comprehensive welfare reform, replacing AFDC with “work not welfare.” State revenue boomed in the 1990s, when, as the Wisconsin Policy Research Institute once described it, “state government seemed to be able to do anything.”

“That was the era of elevated spending, new programs, and tax cuts – something for everyone,” a 2003 WPRI report stated in summing up the roaring ’90s.

Thompson was able to get welfare reform buy in from the welfare party, the Democrat-controlled Legislature, in large part because W-2 didn’t simply eliminate Aid to Families with Dependent Children, it replaced it with the expectation of work – and a suite of taxpayer-funded benefits to smooth the transition of welfare recipients into the job market. W-2 provided funding for job training, childcare, transportation, and other assistance, on the condition that recipients become gainfully employed within a set time period.

Thompson’s 1993 welfare reform package included the Learnfare program, which requires the children of temporary cash assistance recipients to be in school or their parent or guardian would lose the public benefit.

Thompson took his case to the AFDC recipients who had long lived as dependents of the state. He met with welfare moms in Milwaukee and asked what it would take to move them off of government assistance and into the job market.

“We reached a compact. I said I would provide health care, day care and transportation if you guys would go to work,” Thompson recalled in a Tommy@30 interview, part of an upcoming documentary.

Jennifer Noyes, Distinguished Researcher at the University of Wisconsin-Madison’s Institute for Research on Poverty, served as a senior administrator in the Wisconsin Department of Workforce Development where she helped lead implementation of W-2.

Noyes, a panelist at the Tommy@30 symposium, stressed that welfare reform wasn’t reform; it was a replacement program.

“We tested concepts like: How do we get kids to school? How do we promote two-parent families? It was based on a set of philosophical principles.” The vision was simple: Only work should pay.

“This wasn’t just about requiring work for AFDC. It was about a work-based concept,” Noyes added.

At its core, Thompson’s welfare vision was not only about teaching people how to go to work, but that work was worth it.

W-2’s critics have said many of the AFDC recipients forced into the program transitioned into lower-paying service jobs. Then-state Sen. Gwen Moore, a Milwaukee Democrat who became Congresswoman Gwen Moore, told the New York Times that Thompson had done a “very good job of creating a class war here between working poor and AFDC recipients.”

Wisconsin Works, however, is replete with stories of people who were able to rise out of generational poverty. People who broke the chain of poverty for the next generation. Thompson’s W-2, as symposium panelists noted, gave poor people, particularly in African American communities, a sense of “expectation,” that somebody expected something from them, out of them. And the expectation finally was not that they fail, but that they succeed. That, experts say, is perhaps the most powerful component of Tommy Thompson’s “Only Work Should Pay” vision.

Eloise Anderson was on the frontline of the welfare reform or replacement battle of the late 1980s. Anderson, who has served as Secretary of the state Department of Children and Families since 2011, worked in Milwaukee at the Department of Social Services when Thompson rose to power. She remembers the moment she was ultimately sold on the need for change.

“I remember a guy came in in a wheelchair. He was unable to use his hands. He used a thing to write with his mouth. He said, ‘I want a job. I want to work.’ That turned it around for me,” said Anderson, also a panelist at the symposium. “In another program down the hall we had able-bodied people saying they couldn’t work. The disconnect was huge.”

It was difficult to understand unless you lived it, Anderson said. Poor, single mothers getting up every morning, getting their kids ready for school and going to work. And the person next door not doing that and getting government assistance. What was the message? What was the incentive to work?

“Our programs should mirror work. They shouldn’t treat people any differently than if they had to go to work,” Anderson said.

Thompson never stopped working on his Wisconsin Works vision. In January 1995, after his 24-month limit on AFDC cash benefits went into effect, the governor lamented to the New York Times about the continuous inflow of people looking to cash in on Wisconsin’s kindness.

“Twenty-eight percent of the newest people on welfare in Milwaukee County, their last known address is Chicago,” Thompson said. “We’re still 45 percent higher than Illinois. For an $8 bus ticket, you get $200 more coming to Wisconsin.” Wisconsinites “are just fed up to their eyeteeth with people comin’ from other states, not working. People in Wisconsin expect people to work – maybe it’s the old Germanic heritage, the old European heritage.”

In 1999, Wisconsin was recognized “as one of the pioneer states in the area of welfare reform.” The Innovations in American Government Awards Program summed up the state’s success, asserting that “…Wisconsin has seen a wholesale shift in the system, from one that critics argued did little more than determine eligibility and hand out checks to a new system that aggressively and proactively keeps or moves people off welfare by emphasizing work.”

Several states adopted portions of Wisconsin’s W-2 welfare replacement plan, and Thompson’s approach to reform was a huge inspiration behind the federal AFDC replacement model of 1996.

While the W-2 philosophy of rewarding work experienced some reversals during the dependency state days of Democrat Gov. Jim Doyle’s two terms in the 2000s, Republican Gov. Scott Walker again has made welfare reform a priority.

“Wisconsin Works for Everyone, like Governor Thompson’s original W-2 initiative, is based on the fundamental principle that work is dignifying and connects individuals to society and to its values,” Walker said in January. “We believe our public assistance programs should ask able-bodied adults to take steps toward self-sufficiency through work, while also providing comprehensive tools to help them get and keep a job.”

The package , some of which has passed the Joint Finance Committee, includes greater investment in job and skills training, with expanded obligations for working-age, able-bodied adults receiving public housing and other assistance.

Hard work was at the heart of everything Tommy Thompson did in public service, those who know him best say. From his early days in small town Elroy to his failed U.S. Senate run against ultraliberal Tammy Baldwin in 2012 to his “quieter days” as elder statesman, 75-year-old Tommy Thompson has always been a believer in the dignity of work. So it is no surprise that he invested so much of his heart and time in fixing a broken system that had so long punished people for daring to work.

“He believed people, if given an opportunity, could succeed, independently of the government,” daughter Kelli Thompson said.