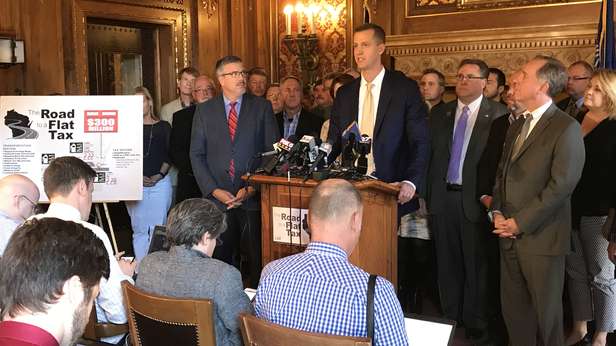 But the Brookfield Republican’s sweeping proposal, which appears to have the backing of the GOP Assembly, promises to be a tough sell for some of the state’s most powerful interest groups – chief among them, the petroleum marketers.

Some in Kooyenga’s party may have a hard time swallowing a provision in the package that would place a sales tax on gas, particularly Gov. Scott Walker, who has declared open war on any proposal bound by transportation tax hikes.

Kooyenga rolled out his “Road to a Flat Tax” package at a press conference Thursday afternoon in front of a deep and wide phalanx of his fellow Republican Assembly members – a show of solidarity for what promises to be a bruising legislative battle ahead.

A tax by any other name?

The transportation proposal adds a state sales tax on gasoline, currently exempted. That provision would raise an estimated $660 million over the biennium (2017-19), assuming gas prices at $2.33 per gallon.

But the tax burden – and the accompanying revenue it would create – would be bought down by a provision lowering the state’s mandated “minimum markup” of gas prices from the obligatory 9.2 percent to 3 percent.

The plan also calls for cutting Wisconsin’s gas tax of 32.9 cents a gallon, one of the highest in the nation, by nearly 5 cents.

Kooyenga estimates the reductions would wring out an estimated $330 million from the $660 million generated from the gas sales tax, leaving more than $300 million in additional transportation funding.

Asked whether he thought the sales tax on gas was just a “tax on a tax,” Kooyenga said the structure is a “matter of mechanics,” that it’s easier for retailers to adopt. Had it been viewed as more complicated or opposed by those charged with collecting it, the lawmaker said, he would have reduced his proposed gas tax cut instead.

The increased revenue from the sales tax would be targeted for transportation bonding reduction, a move expected to reap significant savings to state coffers. About 22 cents on the dollar goes to transportation interest payments, a big piece of the funding pie that will only expand without a major intervention, Kooyenga said.

The speaker has pushed for more funding for road projects. While he acknowledged that he and his Republican colleagues aren’t happy with every element of Kooyenga’s proposal, the increased revenue begins the process of finding a long-term solution to the state’s transportation funding problems.

The petroleum marketing lobby doesn’t quite see it that way. Sources say the special interest group is launching a campaign to kill the minimum markup provision.

One of the big Capitol questions in response to Kooyenga’s sales tax provision: What happens if gas hits $4 a gallon? The legislator, a member of the Legislature’s powerful budget-writing committee, said the sales tax could come with curbs when prices at the pump soar or plummet.

Kooyenga’s debt-reduction plan is dependent in part – about $70 million or so – on federal funding, something that won’t be known until August.

The package calls for a 3.95 percent flat income tax implemented over a decade, and it keeps Walker’s elimination of the state property tax. The Legislative Fiscal Bureau projects over $2 billion in annual income tax cuts when the flat tax is fully implemented.

Kooyenga’s proposal is similar to the MacIver Institute’s “Glide Path To A 3% Flat Income Tax,” released in January.

The governor’s office did not respond to a request for comment Thursday from MacIver News Service, but Walker told conservative talk show host Mark Belling Wednesday that he had no problem working with the Legislature on a transportation solution.

He remains fixed in his position.

“My position has not changed,” Walker said, “I don’t not believe we need to have a gas tax increase…” How about the addition of a sales tax on gas? Walker said he’s not interested in new taxes, even with tax cuts elsewhere.

To pay for the tax cuts, the reform plan eliminates or reduces several tax credits, including:

Marriage Credit – “The proposal eliminates the credit in order to promote tax code simplicity, fairness and assist in paying for the flat tax,” the plan document asserts.

Property Tax/Rent Credit – Would repeal the credit for renters, effective in tax year 2019.

Electronics Recycling Fee – Unique to Wisconsin, the fee calculation is “complicated and creates onerous paperwork,” Kooyenga wrote. “The fund associated with the fee is solvent and the fee is no longer required.”

Working Families Tax Credit – Kooyenga says the tax credit was created to serve as a bullet point on a press release. Less than 1 percent of Wisconsin filers qualify. Kooyenga asserts elimination will simplify the code.

Kooyenga’s plan also eliminates Wisconsin’s Alternative Minimum Tax, something the lawmaker says he’s been fighting for since he first joined the Assembly. Wisconsin is one of a half dozen states with an AMT. The plan would repeal the 6.5 percent alternative minimum tax, effective in tax year 2018.

The package met with immediate resistance from Democrats. Assembly Minority Leader Peter Barca, D-Kenosha, described the flat tax plan as a giveaway to the wealthy and the transportation funding proposal ineffectual.

“Here we are with six weeks left until a new budget is due and they (Republicans) unveil a plan that will not solve the transportation problem to create a sustainable fund, but instead what they will do … is lower taxes for the very wealthy,” he said. “When you have townships turning asphalt roads into gravel, you know you have a serious problem.”

When asked whether Democrats had a plan, Barca said he and Senate Minority Leader, Sen. Jennifer Shilling, D-La Crosse, have offered to sit down and talk to Republican leadership about the problems facing the state. Pressed for a plan, Barca said Democrats wouldn’t do away with Wisconsin’s prevailing wage law, as Republicans plan to do, and they would target tax breaks for Wisconsin’s “middle class.”

Kooyenga’s flat tax approach would target reduction across the board, with every taxpayer eventually paying the same rate. The lowest income brackets would be taxed at the flat rate by 2019, with higher income brackets phased in, through incremental reductions, over the decade.

“The transportation & tax plan that Assembly leadership rolled out today contains a number of good ideas that are worth a closer look,” Fitzgerald tweeted. “I plan to review the proposal in its entirety to determine how closely it reflects Senate transportation priorities as talks continue.”

Kooyenga said his plan is about fairness. If Republican lawmakers are going to push measures to reform government, they need to be as diligent when it comes to eliminating special treatment for business. Minimum markup reform fits the latter, he said.

“Some people have said this is very complex. I think at the end of the day this is not very complex,” Kooyenga told MacIver News Service. “In summary, we’re reducing a very anti-free market law, we’re being consistent with our sales tax, we’re lowering our gas tax, we’re reducing our bonding, we are significantly changing our income tax code and making it fairer, flatter and simpler, and we’re putting in substantive, large transportation reforms.”