The committee was originally scheduled to take up portions of the UW System budget on Tuesday, May 23, but co-chairs Rep. John Nygren (R-Marinette) and Sen. Alberta Darling (R-River Hills) said that the Senate and Assembly had not come to an agreement on the tuition cut. Neither house wanted to raise tuition, but Nygren said that the Assembly was not sold on the idea of cutting tuition across the board to the tune of $35 million.

Instead, the committee voted to strip the $35 million allocated for the tuition cut and spend it on other initiatives, including a 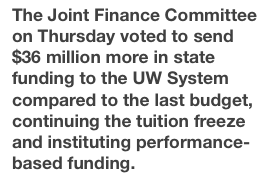 new engineering school at UW-Green Bay and $3 million for the Tommy G. Thompson Center on Public Leadership on the Madison campus. That project was announced Wednesday by legislative leaders alongside UW-Madison Chancellor Becky Blank.

Walker’s proposal would have sent nearly $2.2 billion to the System over the two-year budget period, a $77 million increase from the prior budget. On Thursday, JFC agreed to send the system $36 million more compared to the last budget, a $42.5 million cut from Walker’s proposal.

The most contentious provision by far was the governor’s plan to cut tuition by 5 percent in the 2018-19 academic year. On Wednesday, Walker indicated he would be open to eliminating the cut and continuing the freeze, calling it a win for students regardless. 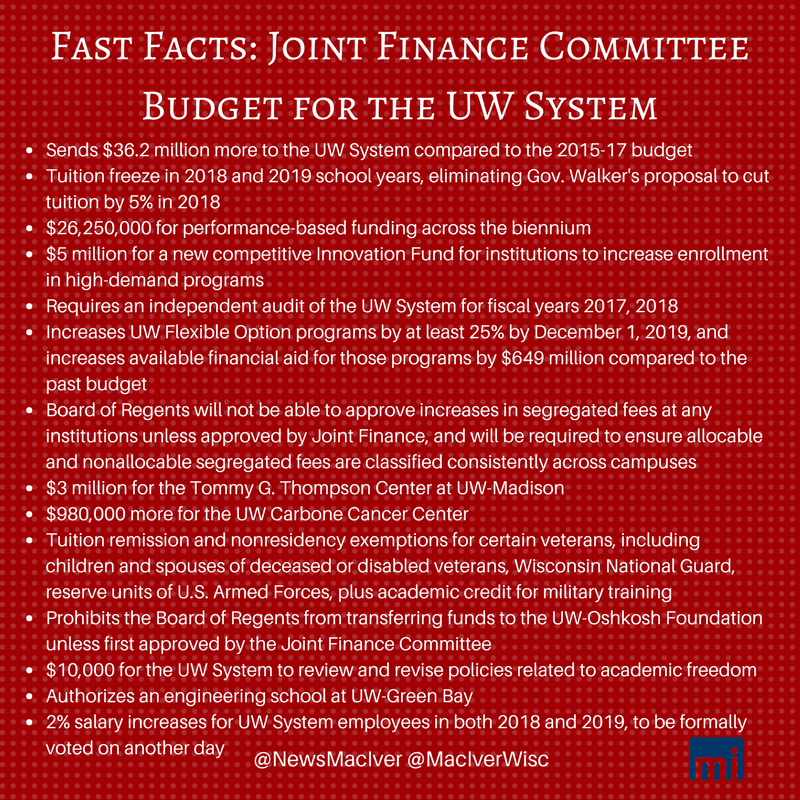 For the second straight budget, JFC included a provision calling for a full independent audit of the UW System. It also prohibits the Board from transferring any funds to the UW-Oshkosh Foundation unless that transfer is first approved by JFC. That’s following a scandal at the Oshkosh campus in which administrators are alleged to have funneled millions of dollars into the financially troubled Foundation for university building projects.

Another major policy change involves a plan to move System schools to performance-based funding, a model that would reward schools’ funding based on outcomes on state priorities such as success in the state workforce and efficiency. The Governor’s proposal would have spent $42.5 million over two years on the initiative, which would then be distributed based on a formula created by the Board of Regents.

Instead, Joint Finance opted to cut down the total amount spent on performance-based funding to $26.25 million, a $16.25 million cut from the Governor’s proposal. The plan also gives more flexibility to the Board of Regents in deciding what kinds of performance measures best apply to the universities.

Under the governor’s proposal, the Board would be charged with coming up with a formula for distributing funds based on five major state priorities: affordability and attainment, student success in the state workforce, work readiness, efficiency, and service.

JFC voted to change the state priorities to 1) grow and ensure student access, 2) improve and excel at student progress and completion, 3) expand contributions to the workforce, and 4) enhance operational efficiency and effectiveness. The Board will also be charged with identifying at least four metrics to measure progress on those goals. 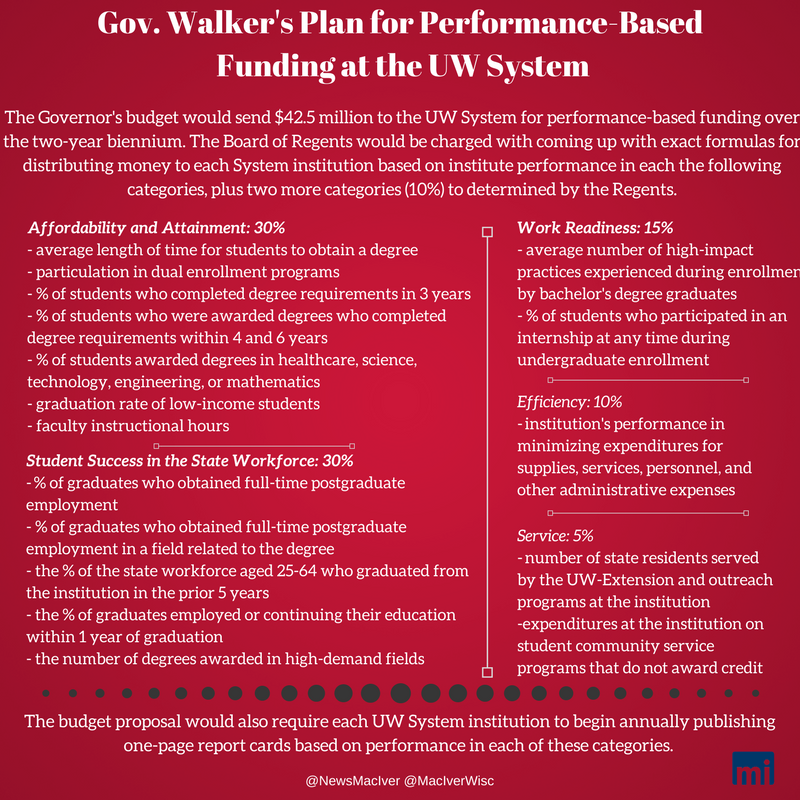 Rather than being approved by the Secretary of the Department of Administration, as under the governor’s proposal, JFC will approve the plan, which the Board of Regents must submit by Feb. 15, 2018.

Co-chairs Rep. John Nygren (R-Marinette) and Sen. Alberta Darling (R-River Hills) said the committee would approve a provision to increase UW employee salaries by 2 percent in 2018 and again in 2019, but did not vote on that measure on Thursday. It will be taken up on another day. The wage adjustments would cost $11.6 million over the biennium. 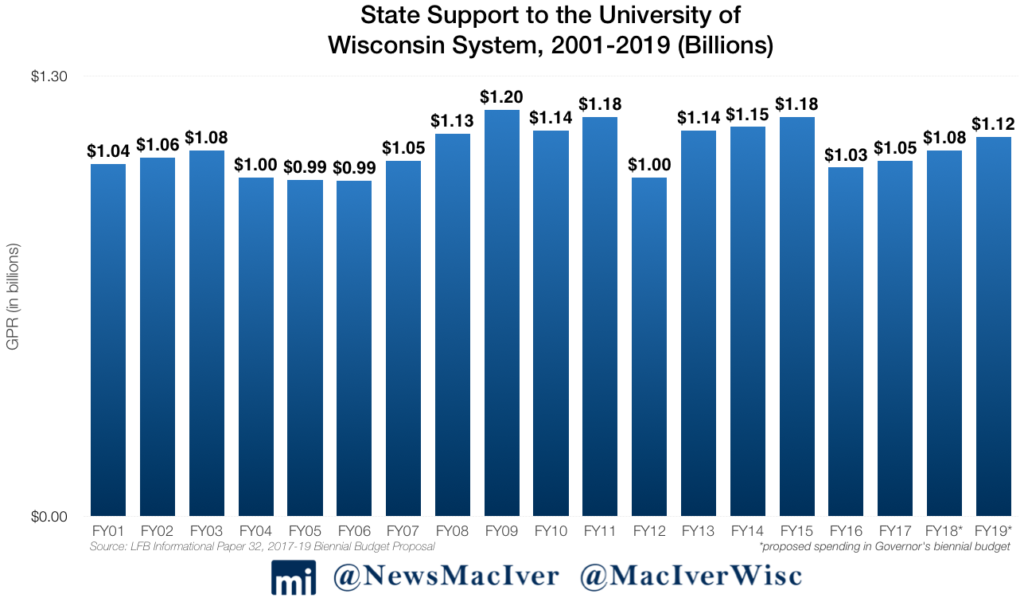 The motion passed by JFC on Thursday includes the governor’s proposal to increase the number of UW Flexible Option programs, though it modifies his plan slightly. The governor’s plan would have increased the programs available through the UW Flexible Option by at least 50 percent by Dec. 1, 2019. Instead, the Board of Regents must ensure that the number of options increases by at least 25 percent.

According to the Flexible Option website, the program is “made for busy adults” and is catered towards individuals who want to get their degrees but may already be working full time, supporting a family, or otherwise unable to attend traditional college courses.

The plan also deletes a requirement that at least one program assist certified nursing assistants in becoming registered nurses. It requires the Regents to ensure at least one UW System School of Education partner with a school district to develop a teacher residency program by Dec. 1, 2019.

JFC’s omnibus motion also includes $5 million in state money for UW institutions to increase enrollments in high demand degree programs. The funds would be distributed to individual institutions on a competitive basis involving requests for proposals.

Among other line items approved by the committee: nearly $1 million more for the UW Carbone Cancer Center and $10,000 in GPR for the UW System to review and revise policies related to academic freedom.

The budget includes several initiatives to assist veterans. A remission of tuition and fees for certain children and spouses of deceased or disabled veterans is included, as well as an exemption from nonresident tuition for certain Wisconsin National Guard members. The UW System and Wisconsin Technical College System will also be required to approve academic credit for military training.

The budget includes significant re-estimates for tuition revenues and positions compared to the governor’s proposal put forth in February, freeing up more than $200 million in general revenue. The budget also approves a UW System request to delete over 222 state-funded university staff positions.

In March, JFC threw out all non-fiscal policy items from the budget proposal, which means if those provisions are to pass, they must be introduced as separate legislation. Some of the governor’s more innovative new policy proposals were part of that group, including one that would require UW institutions to create pathways to three-year degrees for 10 percent of undergraduate programs by 2018 and for 60 percent of programs by 2020.

One proposal tossed by JFC would have allowed students to opt-out of paying segregated fees. That idea made its way back into the UW motion, though slightly altered. Instead, the Board of Regents will be required to ensure that the classification of allocable and non-allocable segregated fees are consistent across campuses. The Board will submit those policies to JFC for passive review, and will not be allowed to increase allocable segregated fees at any institution unless approved by JFC.

Only one proposal that was pulled from the UW System’s budget has been re-introduced as separate stand-alone legislation, championed by Assembly Speaker Robin Vos (R-Rochester). That measure seeks to protect free speech at UW Campuses. Assembly Bill 299, which would increase penalties for students who physically block or stop visiting speakers from speaking on campus, had a public hearing in the Assembly Committee on Colleges and Universities in early May. An executive session has not yet been scheduled.