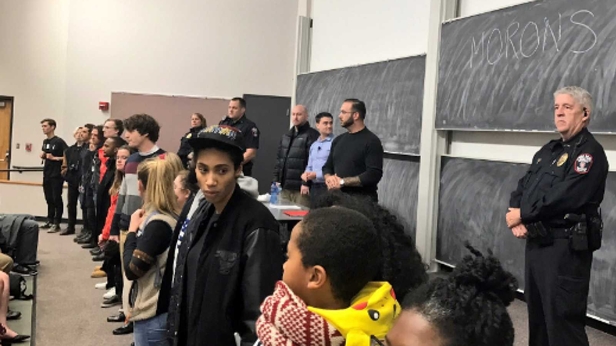 Governor Scott Walker reiterated his support for free speech on the University of Wisconsin campuses in an interview with Mike Gousha on Up Front on WISN-TV.

“DIsagreeing or even protesting is one thing,” Walker said. “If you come into an auditorium where they’re having a discussion or a conversation on this, and you want to hold signs up, you want to protest that, you want to have a rally out front, perfectly fine.”

“But the minute that you shut down a speaker, no matter if they’re liberal or conservative or someone in between, I just think that’s wrong,” Walker said.

Walker was responding to a question about legislation that would require the UW System universities to punish students and administrators that interfere with a speech by an invited speaker. The legislation is not dealing with a hypothetical.

In November, approximately twenty campus radicals attempted to shout down conservative speaker Ben Shapiro during a speech at UW-Madison. The demonstrators broke into chants of “Shame! Shame! Shame!” and “Safety! Safety! Safety,” while campus police looked on without responding. Outside the room, people there to see Shapiro were harassed, including conservative radio talk show host Vicki McKenna.

After Shapiro’s appearance, a group of left-wing activists even tried to have the sponsoring organization, the Young Americans for Freedom, barred from campus.

It’s part of a pattern nationwide. Shapiro is frequently the target of disruptive protests and was even prevented from speaking at DePaul University. At Claremont McKenna College, protesters prevented an audience from seeing Heather Mac Donald by barring the entrances and campus police did nothing. At Middlebury College, protesters violently attacked Charles Murray and a professor at the college, causing her to be hospitalized.

From coast to coast, the new leftist chant has become “shut it down!” The leftists chants accompanied the burning of UC-Berkeley to prevent alt-Right gadfly Milo Yiannopoulos from speaking.

It’s hard to imagine it was possible, but the situation on college campuses has grown so bad, Senator Bernie Sanders spoke out in defense of Ann Coulter’s right to speak at Berkeley, even as the security threats prevented her from appearing.

“To me, it’s a sign of intellectual weakness,” Sanders said at an appearance in Omaha, NB. “If you can’t ask Ann Coulter in a polite way questions which expose the weakness of her arguments, if all you can do is boo, or shut her down, or prevent her from coming, what does that tell the world?”

“What are you afraid of ― her ideas? Ask her the hard questions,” he concluded. “Confront her intellectually. Booing people down, or intimidating people, or shutting down events, I don’t think that that works in any way.”

But, of course, the intimidation does work, and university administrators cave. Middlebury College is still investigating the Murray incident to see which students should be punished, but such incidents rarely result in any disciplinary actions. Despite the destruction, the protesters that shut down Yiannopoulos’ speech remain unpunished, and the “lesson” Berkeley learned was to prevent conservatives like Coulter from speaking on campus.

Meanwhile, many on the Left are now trying to justify attempts to silence free speech on college campuses. From the op-ed page at the New York Times, to the New Republic, to even former Democratic National Committee Chairman Howard Dean, the political Left has decided that they have heard enough.

Which is why it is so important for Wisconsin’s legislature to act now to ensure that both conservatives and liberals on college campuses have the right to be heard. The “heckler’s veto,” whether it is disruption of the event by shouting or actual acts of violence, has no place on our state-funded college campuses.

Because the target of these protests right now is conservatism, some Democrats are claiming that such a bill is unnecessary. Rep. Terese Berceau, D-Madison, actually told the Wisconsin State Journal, “I frankly think it’s an artificial, political controversy — and as long as we perpetuate artificial, political controversies we won’t solve problems.”

Rep. Dianne Hesselbein, D-Middleton, told the Cap Times, “I believe strongly in free speech, and I think we have it now.”

One is tempted to remember how many Democrats were more than pleased when protesters streamed through the Capitol office window of state Rep. Cory Mason, D-Racine, in an attempt to prevent the legislature from acting on Act 10. Perhaps a few of them remember that attempted disruption by protesters a little too fondly.

But even the ACLU, which normally sees threats to free speech everywhere, suddenly is turning a blind eye to what’s happening on college campuses.

“A heckler can be legally removed from an invited speaker’s presentation, but the extreme sanction of suspension or expulsion could chill legitimate, but pointed, questions from the audience,” Larry Dupuis, legal director for the ACLU of Wisconsin, told the Capital Times.

Except no hecklers were removed at the Shapiro speech, and are rarely removed elsewhere. And of course nobody is suggesting that punishment should be applied to a question the speaker invites from the audience. Dupuis is hiding behind a hypothetical that is false upon its face to justify the continued attacks on campus free speech.