[Madison, Wis…] While the rest of us were focusing on the State Capitol and its contentious biennial budget process, two of the state’s largest public school districts came closer to completing their own 2017-18 budgets.

Finally Requiring Act 10 Savings, then Spending the Savings: The Madison Way
Madison Metropolitan School District’s (MMSD) school board voted to change employee healthcare benefits on May 1. The district will, for the first time, require employees to make higher contributions to their own benefits packages, in line with Act 10’s requirements. Those savings, however, will be offset by significant increases in employee salaries. Instead of giving the Act 10 savings back to taxpayers, the school district will increase employee salaries so they do not feel any impact from the change – a deliberate attempt to undermine the law.

MMSD employees will now have two health insurance providers to choose from, rather than three, and will begin paying 12 percent of their own monthly premium costs.

The district anticipates that the shift to fewer providers will save approximately $3 million, all of which will go right back into employee raises. Staff will receive across-the-board raises averaging $1,700, costing about $1.74 million. Starting teacher pay will increase by nearly 10 percent – from $37,401 to $41,096 – for $460,000 total.

Summer school teachers will also see a pay hike from $16 per hour to $25 per hour for district teachers – a whopping 56 percent increase. Those changes add up to $800,000. 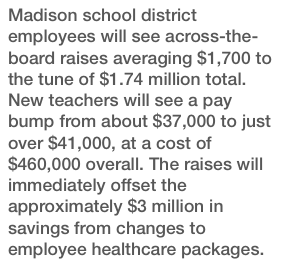 As the MacIver Institute has previously reported, the changes are a thumb on the nose of taxpayers, who are still on the hook for significant benefits packages. In the words of the school district’s budget director Mike Barry, that’s simply “the Madison way.”

Act 10 required that employees contribute 6 percent of premiums towards retirement funds, and 12 percent towards monthly healthcare premiums. Until its passage, public school districts were well-known for lucrative benefits packages that far-outpaced benefits in the private sector.

Madison’s school board will take a final vote on their $389.7 million budget on June 26. Until then, the board is taking public comment on the document.

Milwaukee Public Schools (MPS) and the $1.2 Billion Budget
Over in Milwaukee, the state’s largest district has proposed spending $1.2 billion in the coming school year. That’s a $21 million or 1.8 percent decrease from the previous year. The small dip in spending falls in line with decreasing student enrollment – MPS anticipates a 0.4 percent drop in enrollment in the coming school year.

The budget document cuts nearly 200 positions that are technically classified as classroom positions. However, the vast majority of those positions are currently vacant. One administrator said that “fewer than 10” district employees will be laid off.

MPS representatives also said that all of the layoffs would occur at MPS’ central office, raising questions as to what exactly is considered a “classroom” position.

Compared to last year, the budget increases spending in nearly every major category – operations, nutrition, extension, and categorical – except for construction. Employee benefits increase by 7.7 percent over the prior year, largely driven by increased medical costs.

MPS recognizes its unsustainable spending patterns within the budget itself, which writes that “stable revenues are not enough to sustain the district’s operations as they are today.”

The district has scheduled public hearings on May 16 and May 23 and will vote on the final document late in the summer.

Both districts are expected to make final adjustments in the fall, when both the state biennial budget and student enrollment numbers are finalized.

Stay tuned as the MacIver Institute follows all the stories important to you – the taxpayer!