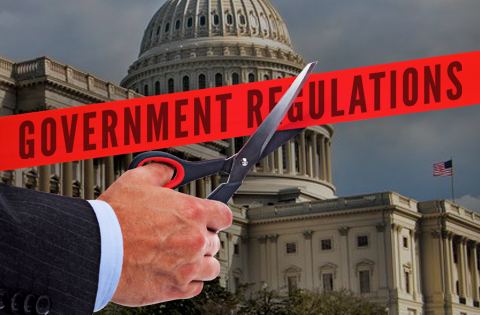 [Madison, Wis…] A bill that would provide more legislative oversight on costly government regulations is headed for debate Tuesday on the Senate floor.

Sen. Devin LeMahieu, R-Oostburg, co-author of SB 15, known as the REINS Act, confirmed the proposal is on Tuesday’s calendar.

While LeMahieu has said there has been little pushback among conservatives about the amended bill, sources tell MacIver News Service that there is some resistance among a couple of northern Wisconsin senators.

Opponents, mostly on the left, see catastrophe written all over the REINS Act.

“While the legislation may seem innocuous on its surface, the proposal is rife with opportunity for corporations and politically connected interest groups to undermine regulations aimed at protecting the public good,” state Rep. Dianne Hesselbein, D-Middleton, told Wisconsin Public Radio last month.

The bill’s authors and other limited government advocates say the proposal is about accountability, something too often missing from government.

“This bill will ensure that officials elected by Wisconsin citizens are able to hold state agencies accountable and have the necessary oversight over rules that impact citizens and businesses in all corners of our state,” Rep. Adam Neylon, co-author of the bill, said at a recent public hearing.

Mountains of government rules and regulations have cost consumers trillions of dollars, according to Wisconsin Manufacturers & Commerce.

“People spend more money paying the cost of regulation than they do for food and clothing each year,” said Scott Manley, WMC’s senior vice president for Government Relations. Manley said he saw his water bill climb 20 percent in the wake of a controversial Department of Natural Resources rule on phosphorus.

While consumers don’t always pay the direct cost of government regulation, they nearly always pay indirectly when businesses are forced to pass along the costs in the form of higher prices for goods and services, Manley wrote in a column titled, “Our Regulatory Burden is Unsustainable.” In the piece, Manley notes that:

* The impact of $1.9 trillion in regulatory costs annually equates to $14,842 per U.S. household. Based upon the average household budget of $53,495 per year, regulations cost more than what families spend on food, clothing and healthcare combined.

* The average American business spends $9,991 per employee each year to comply with regulations. For small businesses with fewer than 50 employees, that number grows to $11,724.

Manley said there is a disconnect among those constantly clamoring for increased government regulation and the reality of the costs American consumers and businesses are being forced to shoulder. Every dollar a business spends to comply with regulation is another dollar that can’t be used to raise wages, hire new employees, or invest in research and product development, the business advocate wrote.

“It’s hard to imagine a less productive use of business capital. Yet the same people who call on government to enact more expensive and intrusive regulations will simultaneously demonize businesses for not increasing wages to a level of their liking,” Manley wrote. “It’s a profound lack of economic awareness and literacy that has become far too prevalent in today’s society.”

REINS Act advocates assert more oversight on potentially costly regulations is a small price to pay to insure state agencies are keeping the pocketbooks of consumers, businesses and communities in mind before they act.

Interestingly, some agency officials have expressed concern that state departments, under the REINS Act, could be subject to costly reviews of the regulations they propose. They worry that they’ll have to find money they don’t have in their budgets to cover the costs – much like the businesses and property owners the agencies force to comply with expensive regulations.