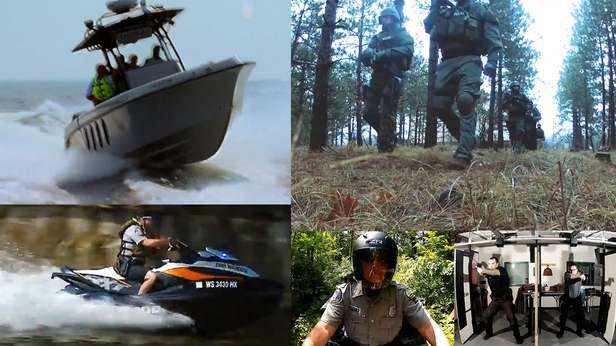 Cut to images of the wilds of Wisconsin – the Northwoods, a massive buck, a churning waterfall. With each new image the drum beat blasts. The producers of this two-minute-plus promotional video aim to quicken the blood, create a counter of natural beauty and musical tension.

Now, the money shot: A conservation warden easing her DNR patrol boat next to a sleek Crestliner. This agent means business. She does a check of the fishing boat, making sure the angler isn’t over his bag limit, looking over his license.

The Wisconsin Department of Natural Resource’s “Experience the Inside of the Outside” game warden recruitment video has the look and feel of an outdoor action movie. The promotional vehicle also spotlights how heavily armed and equipped DNR agents seem to be these days (Get out of the way of DNR’s boat, The Tim Carpenter!)

It is but one of myriad examples of a powerful state agency doing too much and wasting taxpayer money, according to a northern Wisconsin lawmaker and vocal DNR critic.

DNR officials say the video is at least a couple years old, but it’s still on the agency’s website.

Spokesman James Dick says the promotional video was produced in-house at a cost of “approximately $17,000, which could easily have been 45 to 50 thousand dollars if produced by an outside vendor.” Dick said video captured during the filming process but not used in the recruitment video has been featured in several other video projects, including recreational safety messages.

“That’s efficient use of time and helps reduce the cost of those other projects as well,” the spokesman said.

State Rep. Adam Jarchow questions the need for such elaborate productions at an agency constantly “crying, We need more money!'”

“In a time when we are trying to prioritize the spending of taxpayers’ dollars, I’m not sure this is the kind of video that is the best use of our limited tax dollars,” the Balsam Lake Republican said.

Dick said there is no warden shortage in the state now and there wasn’t “back in 2014 when the idea for a recruitment outreach program, including the video, was developed.” The DNR typically hires 10 to 15 recruits per year for various reasons – retirements, wardens leaving for other jobs, etc. What the agency noticed in 2014, Dick said, was a trend in what seemed to be a “drop-off in the numbers and quality of applicants” for the positions.

“So, an outreach plan was developed to reach a wider audience of potential recruits and introduce more people to the opportunities and benefits of become a DNR conservation warden,” the spokesman said. “The video, completed and posted in April 2015, was just a part of that outreach.”

Environmentalists and Democrats have decried moves by Gov. Scott Walker and the Republican-controlled Legislature to make the agency more efficient and more accountable to the hunters and businesses it regulates. Walker’s previous budgets have trimmed nearly $60 million from the department and did away with nearly 200 DNR positions.

“So many changes and roadblocks have tied DNR’s hands so dramatically that they’re really not able to do the job the public expects them to be doing,” Amber Meyer Smith, a lobbyist for environmental advocacy group Clean Wisconsin, told the Associated Press earlier this year.

But it seems the DNR has enough money to produce high-action warden recruitment videos and hold training events at some of Wisconsin’s higher priced hotel and conference destinations, Jarchow said. The lawmaker’s initial review has found the DNR has spent hundreds of thousands of dollars in the current biennium on conferences, seminars and other training events, including the hotel accommodations that often go with them. Jarchow last week said he is waiting on an open records request to track what he asserts are unnecessary expenditures. MacIver News Service, too, is seeking similar information through an open records request.

Dick said he could not speak to the training expenditures until the financial information becomes available.

The DNR spokesman insists the recruitment video has been successful, noting a class of 13 qualified candidates was hired last year.

“The feedback we’ve received on the video (individual and conservation partners) has been outstanding,” Dick said, adding that the recruiting website receives approximately 1,000 hits weekly and increases “considerably” during the conservation warden hiring processes.

“This reaffirms my opinion that the DNR does way too much, and this is why earlier this year I had proposed splitting the DNR,” the lawmaker said. “Now we find out in addition to all of its duties that it also creates videos. “It just reaffirms that this is an unwieldy agency that seems to have no boundaries.”