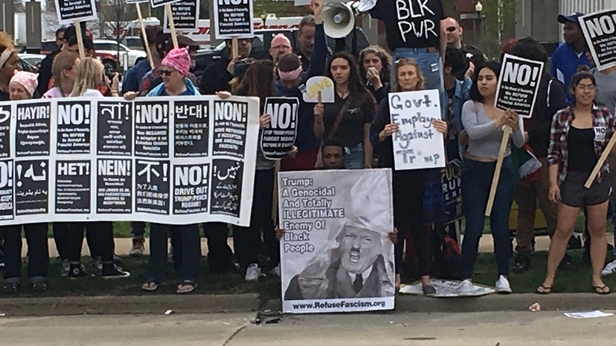 [Kenosha, Wisc…] A crowd of hundreds gathered outside tool manufacturer Snap-on’s facility in Kenosha Tuesday afternoon. Many were there to protest President Trump, who toured the facility and signed two executive orders during his visit. An equally large crowd, however, showed up to voice their support for the president.

MacIver News was there providing live coverage. Trump supporters and protesters gathered on opposite sides of Kenosha’s 80th Street outside the Snap-on plant. Be aware, some portions of this report contain profanity.

Walking through the crowd, we found a number of Trump supporters mixing in with the Trump protesters.

While police officers were hesitant to estimate the crowd size, we estimated several hundred total – a far cry from the more than 5,000 anti-Trump demonstrators who showed up in downtown Milwaukee immediately after the election. And this time, roughly half were there to support the president.

Wide shot of crowd. As you can see, anti-Trump crowd size might be a couple hundred. #TrumpInWI #wipolitics #wiright pic.twitter.com/NHaFUYYRKT

President Trump’s arrival was a tour de force. Three Osprey aircraft and two helicopters flew over the crowd and landed behind a blockade of semi trailers in the vast Snap-on parking lot – the last of which likely carried the president.

We believe this chopper, which landed at abt 1:45, carried President Trump to Snap On plant in Kenosha. #wiright pic.twitter.com/gnPrlggoqD

While President Trump was inside the Snap-on facility, groups of anti-Trump protesters crossed the street to chant and march through the pro-Trump crowd.

At one point, passions among the Trump protesters got heated.

One Trump protester with a bullhorn lingered among the Trump supporters chanting “No Trump, no KKK, no fascist USA,” a commonly heard chant at Tuesday’s demonstration. This particular protester sought out crowds of Trump supporters to approach with his bullhorn, possibly looking to incite a confrontation.

One of the more provocative protest signs portrayed President Trump as Hitler and stated he’s “genocidal” and an “enemy of black people.”

One of the more provocative anti-Trump signs here at Snap-on in Kenosha. #TrumpInWI #wiright pic.twitter.com/wqFKOfF74r

After about an hour and a half, the five aircraft that arrived with President Trump took off, and the crowds quickly dispersed.

The five aircraft have left Snap-on. Crowd beginning to leave too. pic.twitter.com/zJ56Nt7Oeb

Except for a few last minute chants

Remaining anti Trumpers chanting "this is what democracy looks like" and "f*** Trump." One family on Trump side exasperated w/foul language