A deep dive into the numbers

Overall, the Department of Public Instruction sees a large increase of overall funding – $648.2 million more in total school aid than the last budget, a 6.0 percent increase. The biggest single increase comes in the form of $508.7 million for per pupil aid.

Currently, districts receive $250 per pupil in aid. Under the Governor’s budget proposal, they would receive $450 per pupil in 2017-18 and $654 per pupil in 2018-19. One major caveat, though, is that districts will need to prove that they’re in compliance with Act 10’s requirements on employee healthcare contributions in order to receive the extra bump in funding. Act 10 required many public employees to begin paying at least 12 percent of total health care costs, but certain districts, such as Madison Metropolitan, extended their old contracts rather than moving into compliance immediately.

Under the provision, districts will need to certify to DPI that school district employees are paying at least 12 percent of their total health care costs for that school year. If districts don’t or can’t ensure that their employees are contributing to heath care coverage, they could miss out on the new funding. Madison Metropolitan and Beloit School District are among the districts that are currently not in compliance.

Rural Schools
Behind per pupil funding and general school aids, the single largest line-item increase in Walker’s proposal is over $20 million for sparsity aid. Under current law, districts qualify for an additional $300 per pupil if they have an enrollment of fewer than 745 pupils and a population density of fewer than 10 pupils per square mile of the district’s attendance area. Under the budget proposal, district payments increase to $400 per pupil, and districts with an enrollment of up to 1000 students with the same population density will also qualify.

Rural schools also receive over $10 million for high cost transportation aid and increased transportation reimbursement rates to the tune of $92,000 over the biennium. Pupils that are transported more than 12 miles between home and school would receive a $65 reimbursement increase up to $365 beginning in the 2017-18 school year. Summer school reimbursement rates would also increase from $4 to $10 for students traveling between two and five miles, and from $6 to $20 for students transported more than five miles.

Special Education
Another $6 million is sent to special education transitions incentives grants. Last budget, these grants received just $100,000, making this fund the single largest percentage increase in Walker’s DPI budget, at 3,050 percent more than the base year funding. This proposal would provide an additional $1,000 per pupil for children who meet the following criteria:

Other focuses on children with special needs in this budget include a provision that requires a DPI ombudsman to ensure that private school pupils have equal access to special education services. To that end, the provision creates a new “fiscal agent” to ensure that private schools receive federal funding for special education services and other benefits. 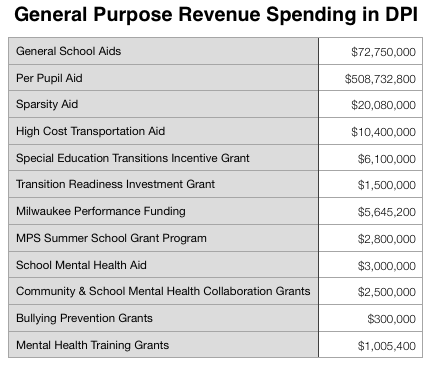 Along the same lines, the budget also specifies that independent charter schools and noninstrumentality charter schools would be allowed to employ personnel and create special education programs on the basis of demonstrated need. DPI would be required to certify to the Department of Administration the amount expended by each school for salaries and related services, and would be reimbursed for such expenses. Entities such as school boards and the board of control of cooperative educational service agencies (CESAs) would also be required to provide special or additional transportation for students with disabilities, as required in any pupil’s IEP.

About 35 percent of that funding is earmarked for distribution among eligible schools that received scores of “significantly exceeds expectations” or “exceeds expectations” on the most recent school report cards. Each school would receive a payment directly proportional to the number of pupils in that school.

The remaining 65 percent of performance-based funding would be allocated to schools that show performance increases of three points or more over two years prior on their report cards. This funding would also be split directly proportional to the number of pupils in each school.

MPS also receives an additional $2.8 million for summer school grants, split evenly across the biennium. The MPS Board is charged with creating a program to annually award grants for summer school programs to increase pupil attendance, improve academic achievement, and expose pupils to innovative learning. This pot of money is specifically allocated for public schools in the city of Milwaukee, except for independent charter schools.

Mental Health and Bullying
With an increased focus on mental health care throughout the Governor’s budget proposal, DPI sees extra funding in this issue area as well. A new $3 million categorical aid program is created to reimburse school districts and independent charter schools for social workers. Another $2.5 million is provided in 2018-19 for community and mental health collaboration grants. DPI is charged with creating a new grant program for the purpose of collaborating with mental health professionals to provide mental health services to pupils.

Another new program is funded to the tune of $300,000 across the biennium to provide and create an online training curriculum for bullying prevention. Students in grades kindergarten through eight are expected to benefit from this program.

One full time position and $1 million is provided across the biennium to fund training for school districts and independent charter schools to provide mental health screening and intervention services for students.

School Choice Programs
As I wrote here, there are no substantial changes to any of Wisconsin’s school choice programs, which are known formally in law as the Parental Choice Programs. Plenty of new regulations, however, are proposed:

All the Rest of It
Other odds and ends in Gov. Walker’s K-12 budget proposal include:

Phew! That was a lot, wasn’t it? As always, follow our budget coverage here at maciverinstitute.com and on twitter at @MacIverWisc. Comment below and let us know what you think about the Governor’s K-12 budget proposals!