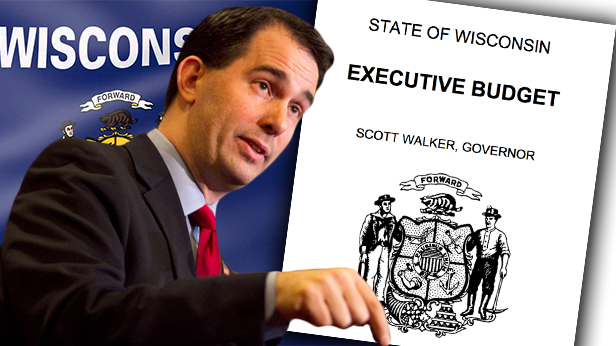 A big picture review of the governor’s budget proposal

Update 4/10/17: On April 6, the Joint Finance Committee stripped all 83 non-fiscal policy items out of Gov. Walker’s budget proposal, including many proposals popular with conservatives like prevailing wage repeal and numerous reforms for the UW System and K-12 education.

While removing some policy items from the governor’s budget is routine, this time JFC removed all of them – a rare move, especially with a governor of the same party. This is just the second time in 25 years that JFC stripped all non-fiscal policy proposals from a governor’s budget.

In addition, JFC scrapped Walker’s transportation budget entirely, opting instead to start from scratch on the contentious issue of transportation funding. This is the first time in ten years that JFC has scrapped an entire portion of the governor’s budget.

Governor Walker presented his 2017-19 budget before a joint session of the legislature on February 8. Earlier this month, the Legislative Fiscal Bureau completed its analysis of the budget and released its 504-page summary of the governor’s budget recommendations.

• Taxes – The budget contains no income, corporate, sales, or gas tax increases. What a breath of fresh air! The budget also reduces the lowest two income tax rates and increases the amount of earnings that fall under the second-lowest bracket for a $204 million income tax cut. It also eliminates the state’s portion of the property tax, a $180.5 million tax cut. The budget does not raise the gas tax or vehicle registration fee.

Walker’s budget proposal offers individual income tax reform that moves the state to a lower and flatter income tax. The budget reduces the bottom bracket from 4 percent to 3.9 percent – since all Wisconsin income earners pay at least a portion of their income at this rate, that tax cut will affect everyone who files an income tax return in Wisconsin. The budget also reduces the second lowest tax bracket from 5.84 percent to 5.74 percent and increases the amount of income covered by that rate to $37,450, pulling more of an individual’s income into the reduced bracket.

By lowering the bottom two brackets and widening the second lowest bracket, an estimated 70 percent of tax filers will see a tax decrease, according to the LFB. In tax year 2017, the total tax decrease is estimated to be $95 million, with the average taxpayer seeing a tax decrease of $44.

It’s important to note that everyone’s income flows through tax brackets in succession. Under the current tax code, for single filers, the first $11,230 that an individual earns is taxed at 4.00 percent. The income made from $11,230 to $22,470 is taxed at 5.84 percent. Income in the next bracket is taxed at a rate of 6.27 percent, and so on and so forth. That’s why a simple 0.10 percent reduction, from 4.0 to 3.9, in the lowest tax bracket, “costs” the government so much revenue. Discounting any exemptions or deductions, everyone’s income flows through the lowest bracket and then up.

Taxpayers making between $30,000 and $40,000 annually would see the largest net tax rate cut. Those individuals would pay an estimated 3.27 percent less in taxes, or about $32 annually.

The only tax filers who do not see a tax decrease under this proposal would be those with no current tax liability and those who are subject to the alternative minimum tax, a special additional tax intended to make sure no one escapes onerous taxation.

The governor’s budget also removes one tax entirely. Under Walker’s proposal, property taxpayers will see the state’s portion of their property tax bill, also called the Forestry Tax, reduced to zero. Eliminating this tax will save Wisconsinites $88.8 million in FY2018 and $91.7 million in FY 19.

Under Walker’s budget, the Department of Transportation would receive $5.9 billion in all-funds over the biennium.

In total, Walker’s budget proposes an increase of more than $522 million from the Department of Transportation’s (DOT) base funding. That includes nearly $15.9 million in increased transportation aid to counties and more than $30 million in increased aid to municipalities. DOT is also requesting an increase of $14 million for the Local Roads Improvement Program and $5 million for the Local Bridge Improvement Assistance program.

In all, Walker increases aid to a variety of local transportation funds by $77 million.

We take a closer look at the state of transportation budget debate here.

Walker’s budget proposal sends $2.2 billion in GPR to the UW System. That’s a $273 million increase from the last budget, or 3.6 percent more in GPR. Including all other funds, such as federal tax dollars, Walker’s budget allocates $12.4 billion, a 1.9 percent increase over the base or $26.7 million more than the UW System requested.

Walker fleshed out his tuition cut proposal in his budget, which provides more than $100 million more in state aid to the UW System in addition to increased funding to pay for the tuition cut.

The governor’s budget proposes a 5 percent tuition cut for resident undergraduate students, saving the average student $360 per year on average. His budget offsets the reduced tuition by providing $35 million more in state aid to the UW System.

In addition, Walker grants the UW System’s request for $42.5 million in additional funding but ties it to performance measures for campuses, including improved affordability and attainability, work readiness, the success of graduates, administrative efficiency, service, and two other benchmarks to be decided by the Board of Regents. Each campus will have to produce a new “Performance Funding Report Card” that will be used to determine how the additional funding is allocated.

Read our deeper dive into the UW System budget here.

In late January, the governor introduced a significant welfare reform package that beefs up work requirements for participants and makes it easier to transition from government assistance to work.

The wide-ranging plan expands work requirements for those on the state’s FoodShare program, requiring able bodied adults with school-age children to either work 80 hours per month or enroll in a job training program. It would also expand work requirements to working-age able-bodied adults on housing assistance.

The plan also seeks to eliminate the “benefits cliff” in the childcare assistance and Medicaid Purchase Plan (MAPP) programs. In both programs, a recipient loses all benefits at a certain income threshold, which means taking pay raises, promotions and more hours at work could cost the recipient all their benefits. Walker’s plan introduces a phase-out model for the benefits as a recipient’s income rises.

Portions of Walker’s welfare reform agenda will require waivers from the federal government. However, one major change since the state’s last budget is the occupant of the White House. How open will President Trump’s administration be to issuing waivers, or to make even more substantial changes to how states administer their welfare programs? We’ll find that out as 2017 moves along.

As always, the Medical Assistance (MA) program is the largest expenditure within the DHS budget. This program includes the behemoth known as BadgerCare, or Medicaid. Over the two-year budget, MA spending will be $20 billion, with $6.1 billion coming from GPR and $10.8 billion from federal sources, among other sources. That’s an all-funds increase of about $800 million from the $19.2 billion base-year-doubled.

The budget includes $326 million in new GPR funding for Medicaid over the biennium. The previous three biennial budgets increased GPR spending on Medicaid by $1.6 billion, $685 million, and $650 million, respectively. While $326 million is a lot of money, the rate of increase in Medicaid spending during Walker’s tenure has slowed significantly. Medicaid’s GPR cost-to-continue is $279 million over the biennium – the smallest cost-to-continue increase in recent years.

In all, under this proposal, DHS will spend $7.94 billion in GPR funds.

The governor’s budget provides nearly $649 million in new spending – more than three times larger than the 2015-17 budget’s increase, which grew public school spending by $203 million overall. Of the new spending, $509 million is allocated for a per pupil funding increase. Notably, school districts will need to verify that they are Act 10 compliant – their employees contribute 12 percent towards their healthcare and 6 percent towards their retirement, as required by Act 10 – before the additional funding is sent to them.

Walker also provides significant increases for rural schools. His proposal offers massive commitments to rural areas through Sparsity Aid, which is funding for small rural districts with fewer than 745 pupils and a population density of less than 10 pupils per square mile of district attendance. Walker’s proposal increases Sparsity Aid by $20 million, bringing the fund to a $55.4 million total over the biennium. This total represents $12.3 million more than DPI requested. The 2015-17 budget allocated $35.3 million to Sparsity Aid across the biennium.

We take a closer look at Walker K-12 budget here.

How much could Wisconsin taxpayers save if Walker’s complete repeal is passed? One study from the Wisconsin Taxpayers Alliance showed that Wisconsinites could have saved $200-$300 million on vertical construction projects in 2014 in the absence of prevailing wage. That estimate doesn’t even consider all other public construction that goes on in the state, including billions of dollars on road construction projects.

Now that the LFB has released its analysis of the governor’s budget, the legislature will swing into work. Individual legislators will hold listening sessions back home. The Joint Finance Committee – the powerful budget committee that will review the budget – will travel the state to collect public input.

As the public reacts to the budget and the legislature embarks on a months-long process of finalizing a version to send to the governor for his signature, the MacIver Institute will continue reporting all you need to know about the budget at each step of the process. For up-to-the-minute coverage of the 2017-2019 budget debate and the latest analysis of its impact on taxpayers, please follow MacIver on Twitter – @maciverwisc.