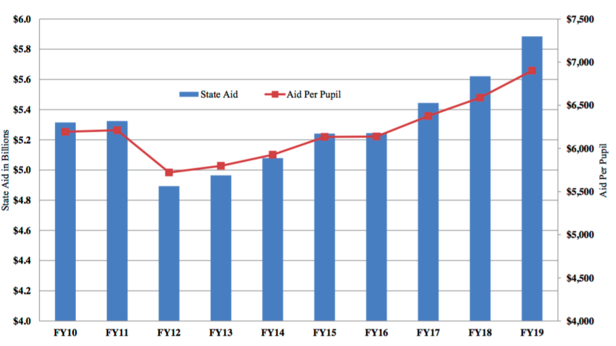 [Madison, Wis…] Gov. Scott Walker introduced his 2017-19 budget proposal on Wednesday, and as expected, the document includes massive spending increases for education. The proposal calls for $648.9 million in new state aids for K-12 education and more than $100 million more towards the UW System. Increases to per-pupil aid will be sent to school districts under the condition that they certify to the Department of Public Instruction that they met pension and healthcare savings made possible in Act 10.

Some school districts – most notably, Madison Metropolitan School District – do not currently require 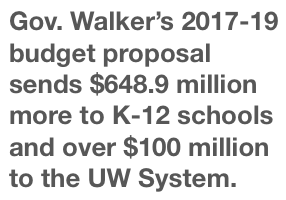 their employees to contribute towards their healthcare premiums. Under the proposal, MMSD and other districts not currently in compliance would need to adjust those requirements in order to receive the bump in per-pupil spending. Employees would need to start paying roughly 12percent of their healthcare premiums and 6 percent of their pensions for school districts to receive the extra dollars.

All told, the $11.5 billion education proposal is the largest investment in K-12 education Wisconsin has ever seen.

In the past several months, the governor has repeatedly stated that he hopes to send more money to public schools in this budget. The new spending – nearly $649 million – is more than three times larger than the 2015-17 budget’s increase, which grew public school spending by $203 million overall. 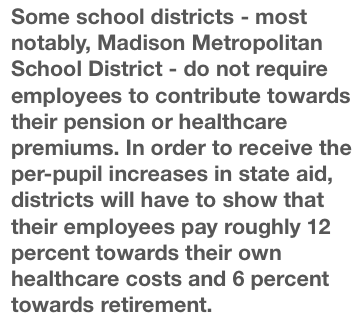 The K-12 proposal puts state funding at 64.6 percent in the second year of the biennium, the highest level since FY09, when state K-12 contributions amounted to 65.8 percent of funding.

In line with state law, students who use vouchers for their education would receive a per-pupil increase of $217 in each year. The budget proposal does not make any other significant changes any of Wisconsin’s parental choice programs.

Focus on Milwaukee
The budget proposal offers significant investment in Milwaukee Public Schools (MPS), including a new $5.6 million incentive fund for which failing public, charter, and choice schools will be able to compete. This performance-based funding is the latest in a line of ideas about how to reform Milwaukee’s troubled schools. Gov. Walker said that he would opt to improve schools by introducing more market competition rather than by making changes to MPS’ governance, such as reforming its school board.

Under the proposal, Milwaukee would also receive $2.8 million for its summer school program, including $1.4 million in each fiscal year for grants to schools that have plans to increase student achievement in summer school. Another $500,000 is allocated for FAST, a mental health initiative that addresses family functioning, abuse, delinquency, and maltreatment issues at home. All told, nearly $9 million is targeted directly towards Milwaukee.

Workforce Development
In line with his workforce development initiatives, Walker proposes putting more than $10 million in training for students, keeping in line with his viewpoint that students must begin preparing for their careers at an earlier age. The brand new Early College Credit Program would get $2.9 million to help students receive college credit while in high school. The Special Education Transitional Jobs Program would receive $7.6 million towards awards for school districts who help students with disabilities successfully obtain employment.

Rural Schools
In the last few months, Walker has said that he would focus on rural schools in the coming budget. Indeed, his proposal offers massive commitments towards rural areas through sparsity aid, which is funding for small rural districts with fewer than 745 pupils and a population density of less than 10 pupils per square mile of district attendance. Walker’s proposal increases Sparsity Aid by $20 million, bringing the fund to $55.4 million over the biennium, or $12.3 million more than DPI requested. The 2015-17 budget allocated $35.3 million to Sparsity Aid across the biennium.

The proposal increases per-pupil reimbursement rates to $400 per-pupil for districts that previously qualified for Sparsity Aid. In order to address this particular aid “cliff,” created when districts tip just over 745 pupils and thus no longer qualify for any additional aid at all, Walker’s proposal creates a new tier of Sparsity Aid funding for districts with 746-1000 pupils at $100 per-pupil.

Rural school districts would see a 100 percent reimbursement from the state in the High Cost Transportation Aid program, which provides additional transportation funding to districts with a density of 50 pupils per square mile or less and transportation costs that total more than 150 percent of the state average. Currently, this fund is reimbursed at about 60 percent. Walker’s proposal offers $25.4 million over the biennium, an increase of $10.4 million over the previous budget. At $92,000 across the biennium, DPI’s budget proposal for pupil transportation is fully funded under Walker’s proposal.

As expected, the proposal offers significant funding for broadband and technology advancement – $13 million more is added to the Broadband Expansion Grant Program and $22.5 million is allocated to Teacher Training Grants through Technology for Educational Achievement (TEACH). TEACH lets schools apply for grants and reimburses districts for improving information technology infrastructure. Another $3 million is allocated over the biennium for the Teacher Training Grant Program, which awards grants to districts to train teachers in new educational technology.

The proposal also offers a few provisions that would aim to help rural school districts with regulatory obligations – school districts would be allowed to share or jointly provide certain specialists rather than be required to have specialists on staff at each district. By law, each district is required to hire individuals for roles such as reading specialist, emergency nursing services, guidance and counseling, and attendance officer.

Finally, the budget proposal adds another $1 million for the Fabrication Labs grant program, paid through the Wisconsin Economic Development Corporation. 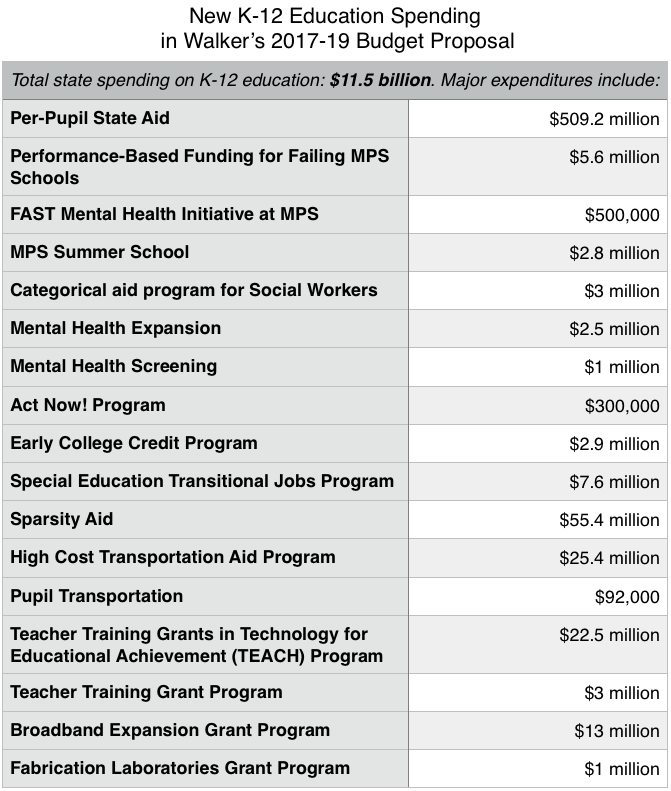 In line with his announcement that his administration will not only freeze tuition at the UW System, but cut it this budget, the Governor’s proposal includes a 5 percent tuition cut for resident undergraduate students in the second year of the biennium. The 5 percent tuition cut “costs” an estimated $35 million, which Gov. Walker will pay for by increasing the UW’s general purpose revenue funding. The $35 million for the tuition cut is in addition to a planned $100 million increase in state commitment to the UW. The proposal includes a tuition freeze in the first year of the biennium.

Last budget, the UW received $2.05 billion in state funding. This budget, the System receives $2.2 billion in general public revenue across the biennium, a 7 percent increase.

Some of the funding will come in the form of performance-based grants totaling $42.5 million. Rather than simply cutting schools a blank check, the universities will get to receive money based on how well they do on certain metrics. The grants would be distributed by the Board of Regents to the different UW System institutions based upon performance on improving affordability, work readiness, and other state priorities.

UW students would be allowed to opt out of allocable segregated fees, which provide support for student activities such as clubs and organizations. Under the proposal, the UW System would be required to outline plans to allow students to complete their bachelor’s degrees in three years.

The Governor’s proposal offers several new pots of money for research at the UW System. Alzheimer’s research at UW-Madison would receive $100,000 across the biennium, and $200,000 is allocated for the Wisconsin Rural Physician Residency Assistance program.

Make sure to keep following the MacIver Institute for updates as the state budget continues to take shape.