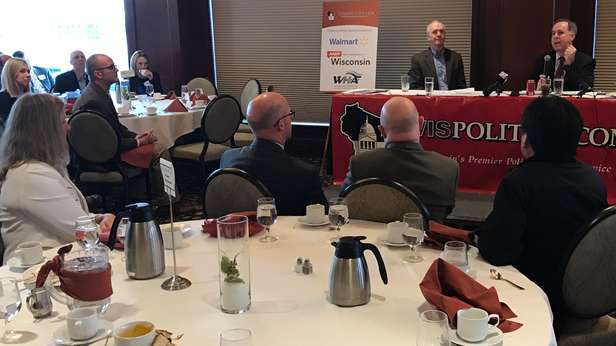 [Madison, Wisc…] Just 24 hours after telling the public a gas tax increase is not realistic, Assembly Speaker Robin Vos announced his plan to increase transportation revenues by $300 million in the next budget.

According to Governor Walker’s policy guidance, Vos needs to find $300 million in tax relief in other parts of the budget before he can increase taxes or fees for transportation funding. Vos does not say what specific taxes or fees will go up and down in the trade. He points to new Fiscal Bureau estimates that indicate $2 billion in additional funds will be available for the 2017-19 budget as a key factor.

At the WisPolitics luncheon on Wednesday, Vos said Governor Walker was, at that moment, successfully blocking a gas tax increase.

Vos was responding to a woman’s blunt question in the audience, “Will you please raise my gas taxes to help pay for the roads?”

The speaker described the situation in terms of a poker hand. “If you’re a card player, I have a pair of twos, the governor has a straight and I have to draw three of a kind to win. Now it’s not impossible, but I wouldn’t bet on me,” Vos explained.

He said since the governor is determined to not raise the gas tax, the legislature needs to consider other options. However, Vos said the answer is not simply eliminating waste in the DOT.

“You’re not going to solve the problem by eliminating roundabouts,” he stated.

He also does not believe ending prevailing wage is a realistic option. He suggested, for now, the state needs to prioritize its needs, while keeping all options on the table.

After the luncheon, Vos told reporters that he did not concede on transportation funding. He said he’s seen research that the public overwhelmingly agrees that road funding is a problem, which means he’s optimistic lawmakers will be able to find a solution.

Vos said he believes the legislature will be able to find ways to lower taxes in the budget, which will allow for increasing revenues to transportation. He insisted that would not mean a gas tax increase.