Governor Walker, State of the State 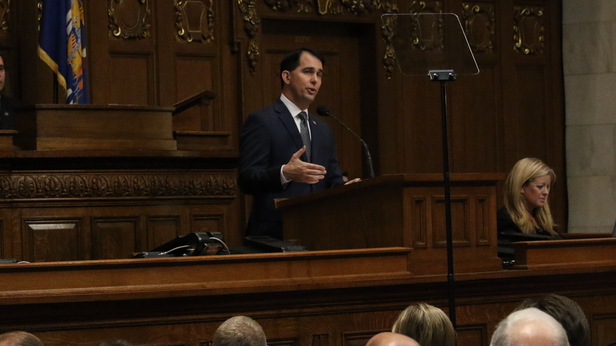 [Madison, Wis…] Governor Scott Walker proposed cutting tuition for UW undergraduate students and pledged to keep his focus on workforce development at his State of the State address on Tuesday afternoon.

Walker touted Wisconsin’s 4.1 percent unemployment rate, $4.7 billion in tax cuts since he took office, and FoodShare reforms that have moved 21,000 people off government dependence and into the workforce.

He then turned to his plans moving forward, including taking the popular tuition freeze that’s been in place for four years to the next level by actually cutting tuition, a plan he says his 2017-19 budget proposal will fully fund.

At a press conference after the speech, Rep. Peter Barca (D-Kenosha) questioned whether Walker would actually fully fund the tuition reduction:

.@PeterWBarca says of @GovWalker call for tuition cut: "He has never funded the freeze, so I can't imagine he's going to fund a decrease." pic.twitter.com/if0hqpCcgK

UW-Madison Chancellor Rebecca Blank seemed open to the tuition cut, but urged Walker to not only fully fund the proposal but also to grant the UW System’s “modest request” for a $42.5 million increase in funding.

Walker repeated his pledge to not raise the state’s gas tax or registration fee, noting that since he took office the state has spent $18 billion on transportation. Walker also reminded attendees that former Gov. Jim Doyle and the legislature raided $1.4 billion from the state’s transportation fund to plug budget holes.

The Department of Transportation’s budget request doesn’t increase any taxes or fees while redirecting funding to local infrastructure maintenance. “Safety and maintenance of our existing system is a priority,” Walker said.

Walker added that in the listening sessions he’s held around the state, voters made it clear that they want the tax burden reduced. “I just believe firmly that we were not sent here by the people of Wisconsin to raise taxes.”

"When it comes to making the right choice for their daughters and sons, #ITrustParents." @GovWalker on #SchoolChoice #EdReform #WIpolitics

Sen. Leah Vukmir (R-Brookfield) applauded the expansion of school choice in her reaction to Walker’s address:

“Families all over the state have more quality choices in education.” #SchoolChoice helps kids all over WI succeed! #WISOTS #itrustparents

Rep. Dale Kooyenga (R-Brookfield) shared Walker’s optimism about the state of the state, but added there are challenges that lie ahead and urged all sides to come together.

Despite the successes Walker highlighted, Rep. Mark Spreitzer (D-Beloit) wasn’t convinced that Wisconsin is better off now than it was six years ago:

#WISOTS long on rhetoric but short on details. WI can and must do better than we have the past 6 years. https://t.co/pipngW40qe

The MacIver Institute live streamed the address on Facebook. Watch it below: