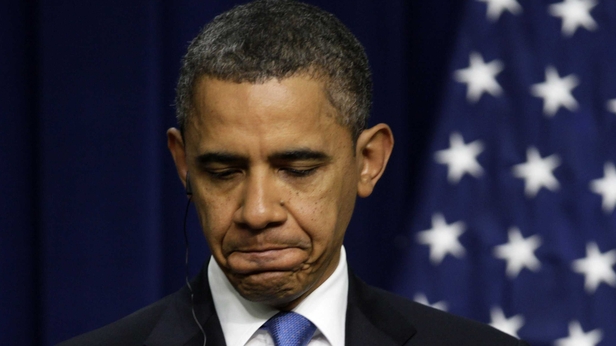 What were Obama’s biggest failures and disappointments?

Any assessment of President Barack Obama’s two terms in office will begin, inevitably, with where he ranks among the presidents. It’s shorthand among some conservative commentators, talk radio hosts and even on social media that Obama is the worst president ever. But any objective examination of history tells us that’s not case, any more than when his supporters said that about Obama’s predecessor, President George W. Bush.

President James Buchanan surely ranks as the worst. Buchanan allowed the South to secede, allowing those states to take military assets that would later be used in the Civil War. Congress even refused to pay for Buchanan’s presidential portrait.

Woodrow Wilson inflicted upon the country the income tax and widespread repression at the end of his second term. Rutherford B. Hayes took office after the infamous Compromise of 1877 when the Republicans agreed to end Reconstruction by withdrawing federal troops from the South in exchange for control of the White House. Andrew Jackson agreed to the Indian Removal Act of 1830 which caused the Trail of Tears for the Cherokee Indians. Richard Nixon was nearly impeached for misconduct in office, and we’re still paying for his domestic policies today. Bill Clinton was impeached. Jimmy Carter’s own party grew tired of his incompetence and he faced a challenge from Sen Ted Kennedy.

So Obama was not the “worst president ever.” But an honest assessment of Obama’s record would not put him in the top tier, either. His own ambition was to be a transformative figure like Ronald Reagan, and his long farewell to the American people is supposed to remind people of George Washington. Instead, Obama’s ambition outweighed his ability, and the last week has us wishing Chevy Chase was back on Saturday Night Live – “Our top story tonight, Barack Hussein Obama is still saying goodbye to the American people.”

Let’s remember the promise of eight years ago when Obama was the change he was seeking, or something like that. He took office after a terrible financial collapse and recession. However, the Bush Administration had already taken the immediate steps of the Wall Street bailout to stabilize the economy, and it was Obama’s fortune to preside over the nation’s economic recovery.

Obama’s $804.6 billion stimulus, crafted by Congressional Democrats, contributed to doubling the national debt in his time in office. It’s estimated that only $33 billion went to “shovel ready” transportation spending. Much of the money was spent shoring up state government spending on Medicaid and education, including here in Wisconsin. But at least the Recovery.gov website was redesigned, and it only cost $18 million.

The “summer of recovery,” like the effects of global warming described by Al Gore, never seemed to arrive. Economic growth through the beginning of 2016 averaged just 2.1 percent. While unemployment is down, labor participation is the lowest it’s been since Jimmy Carter was in office, and that’s only partially due to demographics.

It certainly didn’t help that under the Obama Administration the Federal Register, the book of federal regulations, is now over 97,000 pages long. Worse, according to Forbes the problem isn’t just the regulations but the growth in “Agency guidance documents and memoranda, notices, bulletins, circulars, other decrees.”

Meanwhile, the Obama Administration’s environmental policies didn’t help, either, including his war on coal. Yes, natural gas got cheaper, thanks to fracking technology, but much of the coal industry was hit hard by EPA regulations, putting thousands out of work and raising energy costs. The good news is that Obama never addressed the public on energy costs wearing a sweater and suggesting we adjust our thermostats. We can thank the private sector and fracking.

Finally, the greatest disappointment of the Obama domestic agenda has to be Obamacare. The greatest lie Obama ever told was the promise that if you liked your health insurance you can keep it. Not only did that turn out to be a lie, but people were having a hard time keeping their new insurance policies through the exchanges, too.

Insurance companies like Aetna, Humana and UnitedHealthCare dropped out of the exchanges when it became clear they couldn’t make money by being in them. The insurance companies remaining in the health care exchanges often have such high deductible and premium costs to make them unaffordable, even with government subsidies.

Obamacare co-ops were designed to create more competition, but only seven of the original 23 co-ops now remain, according to The Hill. In Illinois, Oregon and Ohio, 92,000 people had to scramble to find insurance when their co-ops failed in 2016.

As large private health insurance companies leave the market and the co-ops fail, many consumers are left with no choice. Business Insider reports a study by Avalere Health said 36 percent of the “exchange market regions” may only offer one insurance carrier in 2017. Nearly 55 percent will have two or less carriers. The Heritage Foundation says that number could grow to 70 percent of the counties in the United States next year.

Obama said recently that 20 million people have health insurance coverage that did not have coverage before. The Heritage Foundation points out the number is closer to 14 million, and 11.8 million of them received coverage through expanding the rolls of Medicaid, not private insurance. As many of them are discovering, “coverage” does not equal care, and are frustrated by the number of doctors that do not accept Medicaid.

So, no, Obama didn’t preside over a civil war, although race relations actually got worse during his time in office and police departments feel besieged by liberal politics. He didn’t get impeached, although his administration was hardly scandal-free. Obama is not the “worst president ever.”

But his domestic policies can be graded a failure on the Obama standard. Instead of the transformative figure he hoped to become, Obama’s policies should be swept away by a Republican congress that achieved success when it ran against the Obama agenda.