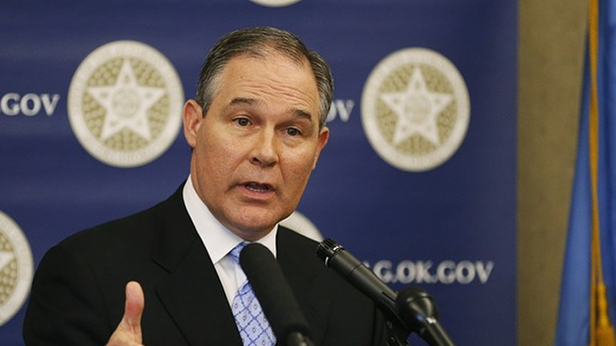 [Madison, Wis…] The MacIver Institute and 22 other free market organizations are urging the U.S. Senate to quickly confirm Oklahoma Attorney General Scott Pruitt to be the next EPA Administrator. The groups expressed their support for Pruitt in a letter sent to members of the Senate on Thursday.

According to a joint study published in 2015 by The Beacon Hill Institute at Suffolk University and the MacIver Institute, the EPA’s proposed Clean Power Plan would cost Wisconsin $920 million in 2030, increase electricity prices significantly and lower disposable income in the state by nearly $2 billion. Under Pruitt, such draconian federal overreach by the EPA would be reined in.

In their letter, the groups stated, “The federal government is not the end-all, be-all solution. Empowering states to take their own steps in addressing environmental concerns promotes responsiveness, the responsible use of taxpayer resources, and ensures that the people closest to the issues and with the most knowledge of what is needed are given the power to do just that…Mr. Pruitt has demonstrated his commitment to upholding the Constitution and ensuring the EPA works for American families and consumers.”

We, the undersigned, express our strong support for the nomination of Edward Scott Pruitt to the position of Administrator of the Environmental Protection Agency (EPA). Mr. Pruitt is highly qualified to lead the nation’s chief air and water regulatory agency. We fully endorse his selection and urge the Senate to confirm Mr. Pruitt as the next EPA Administrator.

Attorney General Pruitt has consistently fought for Oklahoma families and communities and has been a stalwart defender against federal intrusion into state and individual rights. Notably, Mr. Pruitt led a multi-state effort opposing the EPA’s unlawful attempt to take over the nation’s electricity grid under section 111(d) of the Clean Air Act. The EPA’s plan would shutter an estimated 40 GW of reliable and affordable energy, unnecessarily harming American families for little to no environmental benefit.

In recent years, the EPA has been chronically late on complying with deadlines. In a study assessing 1,000 deadlines across the four major stationary source programs, the Competitive Enterprise Institute found that the EPA missed 84 percent of their Clean Air Act deadlines and was late by an average of 4.3 years. Mr. Pruitt will work to get the EPA back on track and in compliance with its statutory Clean Air Act responsibilities.

Attorney General Pruitt has stood up for states, families, and the Constitution by opposing the Administration’s unconstitutional regulatory overreach through the re-definition of the “waters of the United States.” This rule was so invasive that small ditches on family farms or near businesses could have been subject to federal regulation. Mr. Pruitt filed suit against the EPA, refusing to subject Oklahomans and other Americans to this unconstitutional regulation without exhausting all legal pathways.

Attorney General Pruitt understands that air quality in the United States has dramatically improved over the years. According to the EPA, since 1970 alone air pollution emissions have fallen by 70 percent even as we have used more coal, natural gas, oil, and grew the economy by 240 percent. Mr. Pruitt is committed to continuing these trends.

Some claim that Mr. Pruitt opposes clean air and water. This could not be further than the truth. Mr. Pruitt respects and upholds the Constitution, and understands that many of the nation’s challenges regarding clean air and water are best met at the state and local level. It is, in fact the states that implement many of the nation’s environmental laws, and for good reason.

The federal government is not the end-all, be-all solution. Empowering states to take their own steps in addressing environmental concerns promotes responsiveness, the responsible use of taxpayer resources, and ensures that the people closest to the issues and with the most knowledge of what is needed are given the power to do just that.

Mr. Pruitt has demonstrated his commitment to upholding the Constitution and ensuring the EPA works for American families and consumers. Under Mr. Pruitt, we hope the EPA will follow the laws set forth by Congress and cooperate with states to advance its mission of keeping our air clean and our water pure. We fully support Mr. Pruitt for the position of EPA Administrator and encourage the Senate to swiftly approve his nomination.