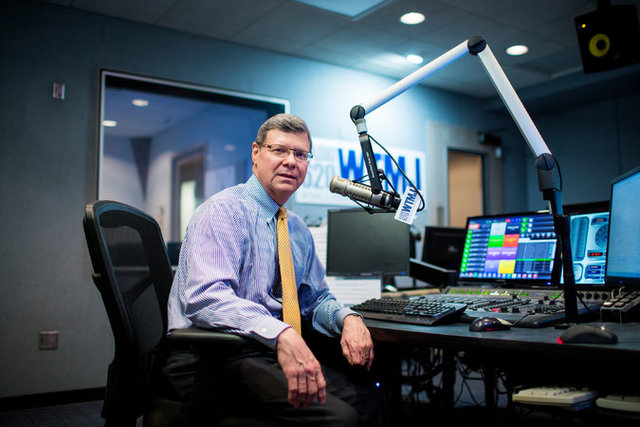 Tuesday was Charlie Sykes Day in Wisconsin, proclaimed by Governor Scott Walker in honor of Sykes’ semi-retirement. For 23 years, Charlie Sykes has been a morning staple on WTMJ-AM, enlightening and informing the public about the issues that matter. Too often, Sykes has had to be the corrective to false media narratives, much to the chagrin of the gatekeepers in the state’s newspapers and broadcast media.

Lately, Sykes has taken on a different role, confronting the false narratives in the conservative media bubble on the right. With the crash of the mainstream media’s credibility, the void on the right has been filled with an alternative media, some of which is unscrupulous in its search for an audience. It will be interesting to see how Sykes in his semi-retirement continues to address the problem at his website RightWisconsin and in his upcoming book.

In 2005, Sykes hosted a number of political bloggers in his studio, including myself. It’s interesting to see how many are still involved. Sean Hackbarth is now at the U.S. Chamber of Commerce. Kevin Binversie is the current acting managing editor of RightWisconsin. Brian Fraley is in public relations and political consulting. Owen Robinson is still writing a column for Conley newspapers. I remember thinking at the time, this isn’t too bad, and the subsequent hits to my website gave me a small indication of the power of talk radio.

But it wasn’t long after that we saw the real power of talk radio. In 2006, Milwaukee school choice was becoming so popular that the caps on enrollment were about to be a problem. Democratic Governor Jim Doyle, an ally of the teachers unions, refused to allow them to be raised. Doyle and the state legislature were in a stalemate despite even some Democrats demanding that the caps be raised.

Sykes, along with the Community Journal’s Mikel Holt and some students from Messmer High School, created a radio spot saying the Doyle was “standing in the schoolhouse door,” imagery reminiscent of segregationist days. Here’s the text from Democratic consultant Bill Christofferson’s blog, who was apoplectic over the radio bit.

AFRICAN-AMERICAN STUDENT: Fifty years ago the Supreme Court opened the schoolhouse doors. But the fight hasn’t been easy. And the fight isn’t over.

AFRICAN-AMERICAN STUDENT: In 1957 a governor named Orval Faubus stood in the schoolhouse door in Little Rock Arkansas to keep nine African American students from getting an education.

AFRICAN-AMERICAN STUDENT: In 1963 a governor named George Wallace stood in the door of the University of Alabama to keep two African American students from going to school.

AFRICAN-AMERICAN STUDENT: A chance to go to the school of their choice.

Governor Doyle: Let Our Children IN.

Governor Doyle: GET OUT OF THE SCHOOLHOUSE DOOR.

Liberals screamed. Christofferson even made a ridiculous claim that Sykes and Holt were breaking the law, a claim that was quickly refuted by bloggers on the right. But eventually, embarrassed by the image of denying African American children a chance at a decent education, Doyle relented.

If Sykes’ role in raising public awareness of the Milwaukee pension scandal helped elevate a certain politician named Scott Walker in 2002, it was the 2006 battle over school choice that finally cemented the program’s place in Milwaukee education. From there, the program could only grow despite Democratic opposition.

A decade later, school choice has been expanded to Racine. Wisconsin has a small statewide school choice program that will only grow. School choice has now been extended to special needs students. Republican legislators are still looking at more ways to give more parents educational options for their children. Democrats are left to making false claims about the program’s costs and the program’s effectiveness.

If that were the only accomplishment of Sykes’ long career, that would have been enough. But even though he is stepping away from the radio microphone, there are many more dragons to slay, more causes to advance, more books to write, and much, much more to say. Sykes may call it retirement, but it sounds like he’s just getting to work.