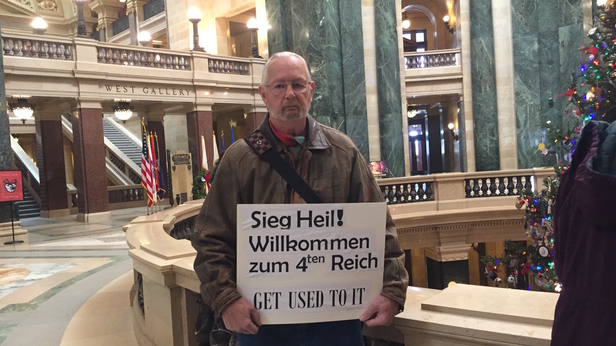 [Madison, Wis…] Although Electoral College votes are usually an uneventful matter of procedure, this year a group of protesters opposed to President-elect Trump showed up to voice their opinion as Republican electors cast their ballots for Trump at the state Capitol on Monday.

Some protesters marched outside, others inside the Capitol rotunda, and others sat in the Joint Finance Committee hearing room, where Wisconsin’s 10 electors gathered to make Trump’s Wisconsin victory official. As the meeting went along, protesters took turns standing up, shouting, and being escorted out of the room.

While their cause was almost certain to fail, the protesters seemed convinced their actions could stop Trump’s victory – the first Republican to win Wisconsin since 1984. One protester screamed that “we’re all going to go to war and die because of you people” as she was escorted out of the room:

"We're all going to go to war& die because of you, shame on you,this is your fault" cries a protestor, electors make it official #wipolitics pic.twitter.com/1vRa1lkr5Y

Another carried around a sign that invoked the Nazi salute “sieg hell! (hail victory!)” and “welcome to the Fourth Reich,” apparently making the claim that the Trump administration will usher in fascism:

As the electors made their vote official, some in the audience begged “please say no to Donald Trump…you are selling us to Russia.”

In the end, protesters failed to persuade any Wisconsin electors. Wisconsin’s 10 electoral votes were all cast for President-elect Trump and running mate Mike Pence.

Elector Brad Courtney, who chaired the Electoral College meeting, spoke about the historic nature of the vote after gaveling the meeting to a close:

As the crowd filed out after the vote was finalized amid a round of chants of “shame!”, one person audibly thanked everyone who came from out of state to help (see the Facebook embedded video below, at about 18:00):

"Thank you to all of you who came up from out of state" – one protestor. No clarification on who exactly she's talking about #wipolitics

The MacIver Institute live streamed the event on Facebook, capturing the proceedings and the protesters as they stood and shouted throughout the meeting. Watch the video below:

Check out our Facebook photo gallery of the Electoral College and protesters below: