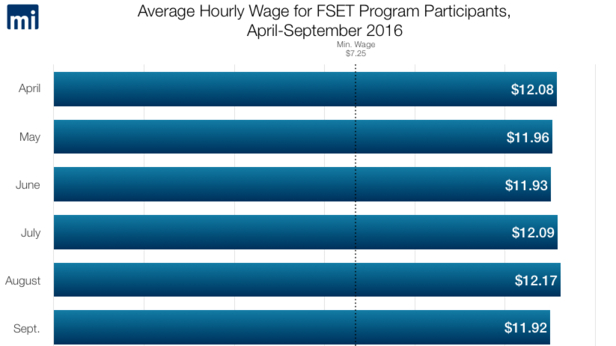 The latest batch of FoodShare Employment Training data shows that the reforms continue to have a strong impact on wages, hours

[Madison, Wis…] One and a half years after Gov. Scott Walker’s welfare reforms went into effect, 17,801 Wisconsinites have gained employment through the FoodShare Employment Training (FSET) program. Those individuals continue to garner higher wages and more hours, continuing the prior year’s trend, according to new data released by the Department of Health Services.

The FSET program now has more than 43,400 new participants across the state, all of whom have enrolled since April of 2015, when the welfare reforms went into effect.

The Walker administration’s reforms require that able-bodied childless adults aged 18 to 49 must work, receive a form of job training, or a combination of both for 80 hours per month in order to receive FoodShare benefits. Individuals who choose not to comply with the work requirements for three months may no longer receive FoodShare benefits for 36 months thereafter.

Since the work requirements took effect, 59,000 individuals have lost FoodShare eligibility after failing to meet the work requirements. Those that comply, however, are seeing higher wages and more hours, helping make the Walker administration’s case that the reforms would help Wisconsinites gain true independence.