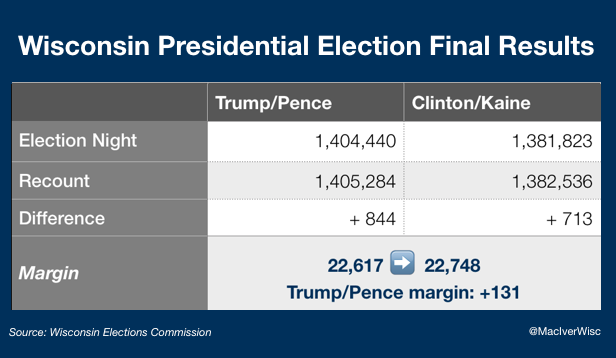 [Madison, Wi…] The Wisconsin Elections Commission formally certified recount results on Monday, bringing the Wisconsin presidential recount to a close. The Trump/Pence ticket gained 131 additional votes, widening the margin slightly to 22,748 votes more than the Clinton/Kaine ticket. Read more about the results here and take a look at coverage on social media below.

The final results of the Wisconsin presidential election changed by just .06% as a result of the #WIRecount #WKOW

This is largest statewide change I've seen in one ward so far in the #WIRecount. Most errors involve handful of votes and often cancel out. https://t.co/0dTJq8sQTa