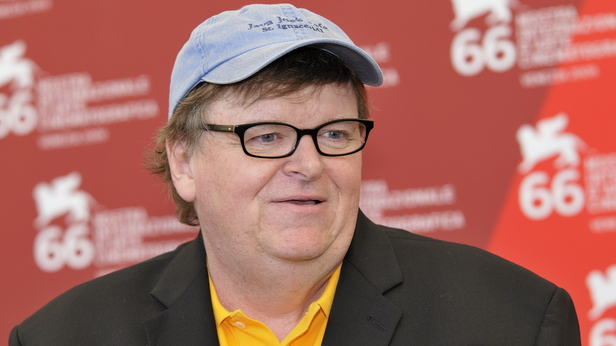 Nothing like a good, or even a bad, film to indulge our need for escapism, especially as Election 2016 rages all around us. But even the movies are no escape lately, and left wing documentary filmmaker Michael Moore has contributed his paean to Hillary Clinton, Michael Moore in TrumpLand.

The film, which debuted October 19, was filmed in Wilmington, Ohio. Of course, Ohio was chosen because it’s ground zero on Election Day. If Donald Trump loses Ohio, it will be nearly impossible for him to become President of the United States. So eleven days of filming, according to CNN, produced a pro-Clinton infomercial that lasts one hour and 13 minutes.

The film has gone “straight to video,” or actually streaming over the internet. I won’t pretend to have watched it. Instead I’ll just refer to the review in The Guardian, “Filmed over two nights in Ohio, it’s an endorsement for Hillary Clinton delivered in the form of a one-man stage show in one of Trump’s heartlands.” Now that’s entertainment.

It’s a good thing for Moore that Hillary Clinton and campaign finance “reform” groups don’t have their way or the two production companies behind TrumpLand, Dog Eat Dog Films and IMG Films, would be in deep doo-doo.

Clinton is in favor of appointing Supreme Court Justices that would vote to overturn the Citizens United decision. This Supreme Court decision said, yes, corporations can spend money to influence elections. Ever since, the First Amendment case has become the bête noire of the left wing, even they though they actually benefit from the case decision, too.

It’s understandable that Clinton would be against the Supreme Court decision. The case was about a conservative organization, Citizens United, who created a documentary in 2008, Hillary: The Movie. The film was ironically inspired by Moore’s Fahrenheit 9/11 from 2004, a documentary attacking President George Bush. Unlike Moore’s film, Hillary: The Movie ran afoul of the Federal Election Commission (FEC).

Citizens United appealed to the courts, won, and now everybody has the same free speech rights as Michael Moore’s production company. That is the case that Clinton is trying to overturn so the FEC can go back into the business of deciding which speech by which corporations is acceptable. Or, some organizations’ speech will be more equal than others’ speech.

Clinton’s approach does not go far enough for some groups. Nineteen communities in Wisconsin will be voting on Election Day in non-binding resolutions to amend the First Amendment so that courts would deny the right of free speech to any group of citizens that incorporates, and the courts cannot recognize the spending of money as speech.

The goal of this move to amend the First Amendment is not only to overturn the Citizens United case, the organizers would like to overturn the 1976 Buckley v Valeo decision as well which allows people to organize independent of the campaigns and speak on elections.

Good news! There is an exception built into the amendment for media organizations, whatever they are. So the Milwaukee Journal Sentinel and The Capitol Times are free to say whatever they want about an election, but if ten people form an organization and incorporate, say Citizens For Free Speech, they’ll run afoul of the new anti-speech Constitutional amendment. Who needs to resuscitate the Alien and Sedition Act when we’ll have the FEC deciding who is and isn’t “a media company?” What could go wrong?

But the rest of us will be reduced to be standing in a park with a megaphone. Oh wait, megaphones and park permits cost money, too. Can we stand on street corners and shout at passing cars? Yes, but the moment we make a sign or hand out flyers, our speech rights will be subject to the courts and the FEC, too. Heaven and a good lawyer help anyone that wants to launch a website or a blog.

So instead of being irritated by Michael Moore’s latest documentary, let’s celebrate it as a victory for free speech. With Donald Trump threatening to sue media companies that criticize him, Hillary Clinton wanting to have our free speech protections overturned by the courts, organizations determined to amend the First Amendment to ban speech they don’t like, and Universities banning politically incorrect free speech, creating “trigger warnings” and “safe spaces,” the First Amendment could use a little celebrating right now.

Because after November 8, both sides of the political spectrum are going to need to have some long conversations, both with themselves and each other. Thank goodness in America political speech is still protected enough to allow those conversations – for now.