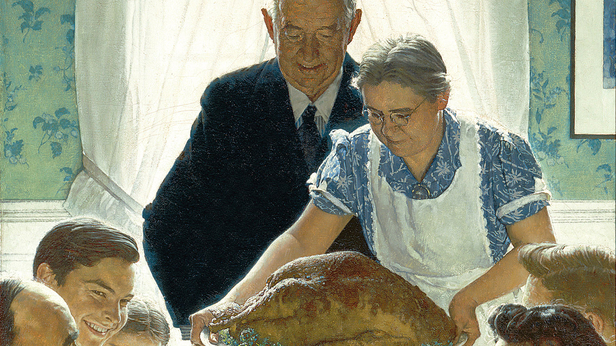 Good news! Your annoying niece or nephew who shows up at everything Thanksgiving with the latest talking points from Organizing for America probably won’t want to discuss the virtues of Obamacare this year. It’s even likely that instead of the perpetual know-it-all smugness and superiority (you know, the non-judgmental kind), they will show up to Thanksgiving completely stunned in silence, unable to interrupt the football game or stories of hunting.

Now I know you’re thinking this will be the best Thanksgiving in eight years. Turkey, no lectures about the evil Pilgrims, more turkey, stuffing, and the only topic remotely close to global warming is the warmth of the kitchen after the oven has been on all morning.

But how will you fill in the conversational gaps? By mentioning the Green Bay Packers? If you think the liberals in your family are depressed now, mentioning the Packers’ defense may cause someone to go for the carving knife.

Maybe it’s your turn to start the conversation with something that hits closer to home. Something fun, like the state’s minimum markup law.

Wait! Put the carving knife down! It doesn’t have to be a serious, tedious conversation that will give everyone indigestion. Just say something like, “You know, in Illinois the grocery stores can sell you that turkey for below cost, unlike here in Wisconsin.”

When your doesn’t-quite-know-it-all niece asks why there’s a minimum markup on her Ben & Jerry’s Ice Cream she brought to serve with the apple pie, you can explain that during the Depression the Progressives thought it was their job to protect everyone from lower prices. She probably won’t believe you, in part because her school didn’t teach her about the Depression, but it will give her something to Google.

See how easy that was? Or try this, “Hey, Aunt Edna, how much did you pay in gas to get here? Did you know that in other states they don’t have a state agency monitoring gas stations to make sure there is at least a 9.18 percent markup on gas prices?”

If at this point the conversation is driving your relatives to drink, and it probably doesn’t take much, you can even point out that the wine at dinner has a three percent markup at the wholesale level and a six percent markup at the retail level. Just don’t spend the rest of dinner explaining Wisconsin’s three-tier alcohol distribution system that punishes craft brewers. Save something for Christmas.

Speaking of Christmas, I bet there are a few bargain Christmas shoppers who think think the real holiday starts when the stores open with their “door buster” sales. Is Uncle Billy going to get a brand new television, and little Timmy going to get a new laptop computer for school? Well, that’s a great time to remind the Santas in your family that the stores in Wisconsin can’t offer the same deals they offer in Illinois because of the minimum markup law.

You might get asked, “What happens if one of those Wisconsin stores actually offers something below cost to try to attract shoppers? Let your family know that a complaint could be filed with Wisconsin Department of Agriculture, Trade and Consumer Protection (DATCP) who, despite the “consumer protection” part of their name, will actually investigate to make sure that nobody gets too good of a deal when they go shopping. Yes, the price police will come calling, and you will pay more and like it.

But if they still really want a good deal, you can always give the advice that Brandon Scholz of the Wisconsin Grocers Association gave while defending the law to the CBS affiliate in Milwaukee last year. “You can go online and find tremendous deals whether it’s Amazon, or if you online shop at your local grocery store or online shop at other retail stores or sporting good stores,” Scholz said.

The best part of this, a poll last year showed 76 percent of the public is in favor of repealing the minimum markup law after it’s explained to them. Even your niece who was thinking about going to Canada after the election might change her mind to stay and fight for better shopping. Besides, Thanksgiving in Canada is in October which really screws up the holiday shopping rush.

So bring the whole family together by talking about minimum markup repeal. After five minutes, I promise nobody will want to talk to you and you can watch the football game in peace.