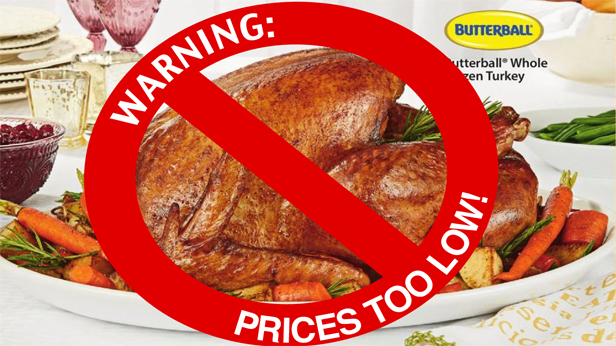 [Madison, Wisc…] – As the holiday shopping season draws rapidly near, the John K. MacIver Institute for Public Policy is once again out with its yearly public service reminder that low, low, low prices are still illegal here in Wisconsin thanks to our antiquated Minimum Markup law. Wisconsinites need to be vigilant as they shop to avoid illegally low prices on Black Friday, Cyber Monday and, well, just about any other day of the year here in the Badger State.

Wisconsinites are warned to avoid those stores with a reputation for trying to provide their customers with low prices – Walmart, Menard’s, Woodman’s, Meijer, Best Buy, Kohl’s, Target, Farm and Fleet, Fleet Farm, Kmart, Home Depot, Michaels, Gander Mountain, Amazon, Northern Tool, Macy’s, Cabela’s, Toys-R-Us, Lowe’s and frankly just about any retail establishment open on Friday or any store where you can purchase merchandise, wares, or some type of good, any type of good.

Brett Healy, President of the MacIver Institute, noted that these retailers are particularly notorious for offering deals. “Just look at the Black Friday Doorbuster deals they are offering. Those prices are crazy cheap, they must be illegal,” Healy said.

“We cannot live in a state where regular Wisconsinites can buy a 40″ 4K smart TV for just $299.99,” commented Healy. “What kind of society are we where the working class and the elites can all buy the same high-end, top-of-the-line television set for less than $300??!! Thankfully, Wisconsin’s Minimum Markup law makes this sort of economic justice illegal.”

In August, the MacIver Institute obtained advertisements from Walmarts in the Chicago, Milwaukee, and Minneapolis areas. On school supplies, Wisconsin consumers pay up to 148 percent more than Illinoisans or Minnesotans.

And a recent poll found that 56 percent of likely voters in Wisconsin support repealing the minimum markup law. Support for repeal increased to 76 percent when the voters learned more about the law.

Despite the overwhelming public opposition to the law, Healy reminded Wisconsinites that low prices are still illegal and warned shoppers to be careful while shopping for their Thanksgiving dinner and for deals on Black Friday.

“If you think you might be the victim of a great deal on that Milwaukee Tool M18 Fuel with one-key 1/2″ Hammer Drill you’ve always wanted, or if you think your Wisconsin cranberries are suspiciously cheap, I urge you to immediately call the State of Wisconsin Price Police at 1-800-High-Prices,” Healy said.

“I have been told by insider sources that the Wisconsin Price Police will have operators standing by around-the-clock to take your complaints about Black Friday sale prices, doorbusters, buy-one, get-one-free offers, six-hour price breaks, or any other type of diabolical good deal. Once the government bureaucrats have logged your complaint, written a consumer fraud ticket in triplicate and checked to make sure this depression-era law is still on the books, an undercover bargain cop will be immediately dispatched post-haste to your location to apprehend the penny-pinching scofflaws.”

“We can end this scourge of low prices that has plagued Wisconsin for decades,” Healy continued. “But my fellow cheeseheads must be brave and resist the temptation to take advantage of a good deal. Even though frugality is a part of our DNA here in Wisconsin, if we band together, we can all pay higher prices once again like the Unfair Sales Act always intended. Evil corporations should be forced to charge us more – low prices are jeopardizing our future and our children’s future.”