Minnesota’s Obamacare exchange, once heralded by the left, almost collapsed this year

Amid the noise and drama of the campaign for the Oval Office between Hillary Clinton and Donald Trump, a kernel of truth about Obamacare – rarely mentioned by either candidate – emerged recently when Minnesota’s Democratic governor admitted the law has failed.

“The reality is the Affordable Care Act is no longer affordable for increasing numbers of people,” Gov. Mark Dayton told the Associated Press on Wednesday. Dayton in 2013 was among the law’s biggest cheerleaders, touting the state’s low health insurance rates at the time. 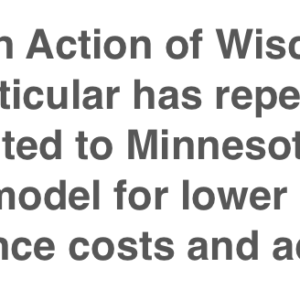 Even Bill Clinton, in another rare moment of truth in politics, acknowledged that Obamacare is “the craziest thing in the world.” He has since backpedaled and apologized for accidentally saying what he really thinks.

Back in 2014, Wisconsin progressives seized on Minnesota’s full embrace of a state-based Obamacare exchange and its costly expansion of Medicaid to constantly point out that Wisconsin’s governor, Scott Walker, should do the same.

Citizen Action of Wisconsin in particular, a progressive group that has been pushing the one-size-fits-all, top-down bureaucratic health care model from day one, has repeatedly pointed to Minnesota as a model for lower health insurance costs and access. They have been non-stop in their criticism of Walker and legislative Republicans, explicitly blaming healthcare premium differences between the two states on Wisconsin’s refusal to accept a Medicaid expansion.

Earlier this year, Bill Kaplan even wrote on Citizen Action’s website that Walker and the GOP’s refusal to embrace Obamacare is “reminiscent of Japanese soldiers fighting on after WWII ended.” It’s now apparent he was wrong, and Gov. Dayton seems to agree. 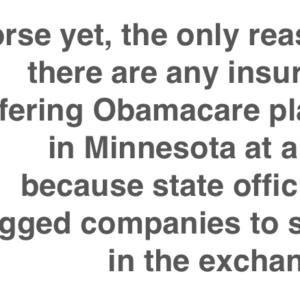 As we are now finding out, Wisconsin lawmakers took the right path, thankfully ignoring Citizen Action’s cheap potshots and instead choosing fiscal responsibility. Minnesotans covered through Obamacare will see shocking premium increases from 50-67 percent in 2017. Worse yet, the only reason there are any insurers offering Obamacare plans in Minnesota at all is because state officials begged companies to stay in the exchange. The only way the regulators could force health insurance companies to stay in the exchange was to allow the astronomical rate increases.

“The Commerce Department pursued every option within its power to avert a collapse this year,” said Minnesota Commerce Commissioner Mike Rothman in a statement by the state’s Department of Commerce. “We succeeded in saving the market for 2017, with only Blue Cross leaving.” 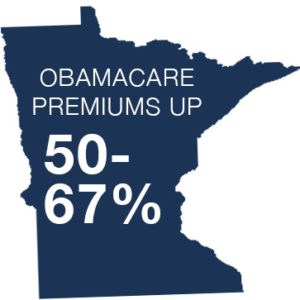 Refusing to acknowledge the fundamental and obvious flaws that even Dayton and Clinton have now admitted, Citizen Action put out an absurd press release mindlessly blaming Obamacare rate increases on “sabotage” by health insurers and conservative politicians. The statement – less an analysis and more a desperate plea – advocates price controls for drug companies and a public option as the solutions to the problem of rising healthcare costs, a problem that Obamacare was supposedly enacted to fix.

Clearly, Citizen Action will never admit the colossal failure that Obamacare is and the horrific shape that the Minnesota exchange is in. They believe that bigger government is the solution to every problem that ails society – even the ailment of big government itself.

While Wisconsin is clearly in a better position than Minnesota – Wisconsin hasn’t faced a total collapse of its individual insurance market – health insurance customers here will also see double-digit rate increases in their Obamacare-compliant plans, according to the state’s Office of the Commissioner of Insurance (OCI).

On average, Wisconsin Obamacare premiums will increase by 15.88 percent in 2017. The OCI recently reviewed and approved the rate changes requested by Wisconsin insurance companies. Insurers began filing their 2017 policies and rate increase requests in June.

UnitedHealth and Humana, two of largest health insurance companies in the country, both backed out of Wisconsin’s market entirely earlier this year. Anthem also significantly cut back its offerings in 34 counties last year and withdrew from Milwaukee, Kenosha, and Racine counties entirely. With fewer companies competing in the Wisconsin exchange, premium increases have continued to far outpace inflation.

One major insurer remaining in Wisconsin, Aetna, will increase its premiums by an overall 29.32 percent for its small group PPO plan, with increases varying from 7.59 percent to a maximum of 59.71 percent.

Dean Health Plan, Inc. will raise premiums for its individual HMO plan by an overall 18.73 percent, with rate changes varying from a 9.73 percent reduction to a 46.34 percent increase. The company plans a 2.91 percent decrease for its small group plan.

Gundersen Health Plan, Inc. will increase its premiums by an overall 9.33 percent for its small group plan and 18.36 percent for its individual plan – that plan’s premium increases range from 7.87 percent to 42.67 percent.

Blue Cross Blue Shield filed a 3.96 percent decrease for its small group plan, but that plan is listed as “off-exchange” and only affects 270 people.

Regardless of the reason for these steep price increases, Wisconsin Commissioner of Insurance Ted Nickel had this warning for consumers: “While increases for Wisconsinites are lower than many other states, these rate changes and the recent exiting of numerous national carriers make it even more important for individuals to actively explore their health insurance options to ensure appropriate coverage.”

Last year, Obamacare-compliant plans saw premium increases between 11 and 19 percent, the MacIver Institute reported in December. In addition, our analysis found 600 fewer plans to choose from in 2016 compared with 2015. It also found the cheapest plan in the state in 2016 is an individual catastrophic level plan in Columbia County that costs $118.97 a month, with a $6,850 deductible and $6,850 maximum out of pocket.

One analysis found that Common Ground would likely be among the co-ops that fail in 2016. If it does, it would join 17 other co-ops that have closed their doors since Obamacare went into effect, taking billions of taxpayers dollars with them.

However, Common Ground recently received a cash infusion from a private, undisclosed source that will likely keep the co-op in business at least until next year.

Common Ground’s struggles come despite higher-than-expected enrollment, which President Obama praised in a visit to Milwaukee earlier this year. By the end of 2014, the co-op enrolled 26,000 people when they expected only 10,000. Despite the enrollment numbers, Common Ground’s net income loss of $36.5 million in 2014 was $35 million larger than expected.

Under Obamacare, 23 non-profit health insurance co-ops were set up around the county in an effort to provide competition in the insurance market. Just six remain in business, with many on life support. Taxpayers have spent more than $1.2 billion dollars on the now-closed co-ops.

Common Ground’s struggles parallel those of private insurers, which have cited massive losses as they’ve withdrawn from Obamacare exchanges around the country. Plans available on the exchanges tend to attract older, sicker, and more expensive patients than predicted when the law was first passed, leading to unbalanced risk pools and unsustainable financial losses.

The much-heralded market in Minnesota is experiencing the same problem. “Minnesota’s individual market also faces unique challenges because of a disproportionate concentration of individuals with serious medical conditions whose high claims costs must be absorbed by a relatively small risk pool, pushing up rates for everyone in the individual market,” said the Minnesota Department of Commerce in a statement.

Meanwhile, the individual mandate and financial penalties for those choosing to go without increasingly expensive insurance have largely failed to encourage younger, healthier individuals to buy health insurance.

Despite Citizen Action’s blame game, the real picture is clear: Obamacare is now in the downward spiral that everyone except groups like Citizen Action saw coming years ago.

Rep. Jim Sensenbrenner got it right in a statement issued after the rate increases became news: “Affordable health care is a thing of the past under Obamacare,” he said.

“As insurance companies continue to opt out of this disastrous policy, increasing costs are passed on to hardworking Wisconsinites who simply cannot afford the additional financial burden. It’s critical we repeal this terrible law and bring quality, affordability, and accessibility to our healthcare system,” Sensenbrenner said.

As more of the premium data becomes available, the MacIver Institute will continue to update its analysis of pricing information for Obamacare plans in 2017.