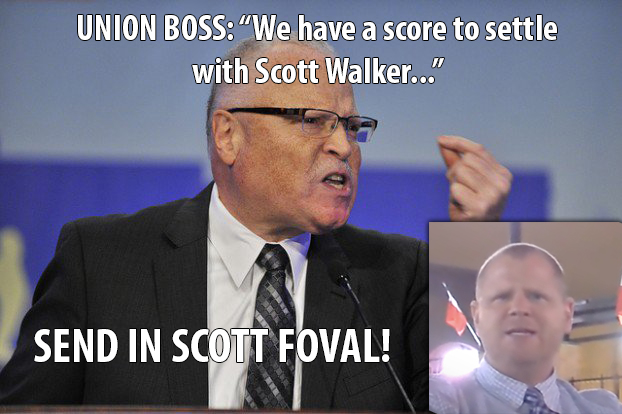 Scott Foval, a left-wing activist recently caught on tape explaining how he stages protests at opponents’ rallies in order to incite chaos, has long-standing connections with a national union boss who vowed he would get even with Gov. Scott Walker for his 2011 reforms to Wisconsin’s collective bargaining laws.

Foval is the former national field director at Americans United For Change (AUFC), a progressive group whose board chairman is Lee Saunders – also president of the American Federation of State, County, and Municipal Employees (AFSCME), a union at the forefront of the 2011 protests over Act 10 in Madison.

The protests failed, and Act 10 ultimately became law. But during Walker’s 2014 re-election campaign, Saunders said he and the unions wanted revenge. “We have a score to settle with Scott Walker…He took collective bargaining away from us. He stole our voices, in a state where we were born,” Saunders said.

“We have to have people prepared to go wherever these events are, which means we have to have a central kind of agitator training,” Foval stated in the recording. “Tomorrow, for instance, we are turning out 500 people in front of the Trump International in D.C,” he said, describing the groups of protesters-in-waiting he has planted throughout the country.

Foval also admitted to organizing the violent confrontations outside a Trump rally in Chicago that injured several police officers and caused the Trump campaign to cancel the event.

On the same video, Foval was also caught admitting that he planted protesters at a Walker rally in Iowa in 2015. Walker was in the early stages of his presidential bid at the time.

“You remember the Iowa state fair thing where Scott Walker grabbed the sign out of the dude’s hand and then the dude gets kind of roughed up right in front of the stage right there on camera? Yeah, that was all us. The guy that got roughed up is my counterpart who works for Bob [Creamer],” Foval said on the video. Creamer runs Democracy Partners, a group that serves as a sort of middleman between the Democratic Party and groups like AUFC.

Foval moved to Madison in 2011 during the protests over Act 10, and stayed after it became law. He’s hardly laid low in the years since, having been quoted in the media as a “Madison activist” hounding Walker. In 2015, the Milwaukee Journal Sentinel reported on a protest against Walker in Ohio:

“I think this was the first time outside of Wisconsin where he’s been kind of surrounded by protesters as he’s leaving a place and where it appears he’s been a little boxed in,” said Scott Foval, one of the protesters and a Madison activist with the liberal group People for the American Way.

Foval’s group is one of several on the left that flock to events by GOP candidates and try to make them answer questions on their issues of choice.

“We’re bird-dogging all of them,” Foval said. But he said Walker is a “particular” magnet because of the way he wears their hostility as a badge of honor.

Saunders and the unions tried their best to make good on their vow to “settle the score” with Walker in 2014, according to a Washington Post article from the time:

Saunders said that the union would have 40,000 staff and volunteers deployed in key states in the run-up to November’s election, focused on both gubernatorial and U.S. Senate campaigns.

The latest video, however, adds another tactic that Saunders didn’t mention to the Post: planting paid protesters at opponents’ events to incite confrontations, chaos, and negative media attention for candidates like Walker.