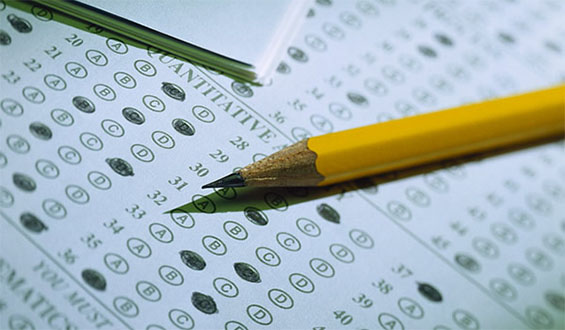 Fewer than one out of five MPS students proficient in English, math

This is the first dataset from the Forward Exam, which is the third statewide exam in as many years for public school students across the state. In his press release, State Superintendent Tony Evers wrote that he is “hopeful that this will be the last time for a very long time that we are transitioning assessments for our kids.” DPI has warned the public not to compare the results to last year’s statewide test, the Badger Exam. 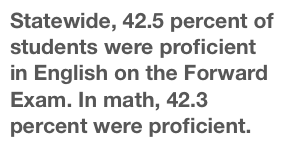 At Milwaukee Public Schools (MPS), the state’s largest school district, students fared worse than the statewide averages in every subject. In English, 19.7 percent of MPS students achieved proficiency. In math, just 14.9 percent were at grade level. MPS made headlines last week when DPI announced that the district would likely no longer be qualified as failing to meet expectations on the forthcoming state report cards.

“We are making progress toward having more MPS students better prepared for college,” MPS Superintendent Darienne Driver said. “While this demonstrates some improvement, the change is incremental, and we have much more work to do. As a district, we will continue to aggressively implement strategies designed to improve academic achievement.”

A deeper dive into the numbers shows significant achievement gaps between white and black students, both statewide and within some of the state’s largest school districts. Perhaps surprisingly, the data revealed massive achievement gaps at Madison Metropolitan School District (MMSD), where white students on average fared better than the statewide average, while black students tended to fare worse.

While Evers’ release focused on improving participation rates, he did address the massive achievement gaps. 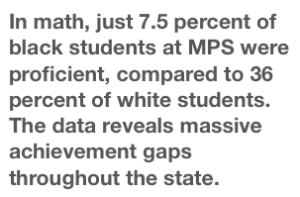 “I remain troubled by the achievement gaps that persist in Wisconsin,” Evers said. “As a state and within our communities, we must work together to raise awareness of this problem and implement policy-driven solutions. It is not an issue of one student or one school district, it is an issue that impacts us all.”

Perhaps the best piece of news for MPS within the dataset was that older students did better than younger students in English Language Arts, reversing a long-static trend that still exists statewide. In 3rd grade, 18.7 percent of students achieved math proficiency. In 8th grade, that number went up to 22.1 percent. The overall numbers are still troubling, but MPS has clearly made some strides in retaining student attention and growth, especially in middle school.

The dataset also revealed comparatively strong results for Wisconsin’s parental choice programs. When comparing economically disadvantaged students statewide and at MPS to students in the Wisconsin Parental Choice Program and the Milwaukee Parental Choice Program, respectively, students in the choice programs fared better in every category. All three parental choice programs – statewide, Milwaukee, and Racine – are income limited for new students. As a result, comparisons are more accurate when made with economically disadvantaged traditional public school students rather than all students.

Results at some schools were even more dismal than the statewide numbers. Zero students at Auer Avenue Elementary achieved proficiency in math, and only six of 146 students were at their grade level in English and Language Arts. At Carson Academy of Science, which touts a “rigorous Math, Science, and Technology curriculum,” four of 228 students, or 1.8 percent, were proficient in math. One student was proficient in science. Twelve students were reported as being at their grade level in English.

The new numbers also included ACT scores for public high school juniors who took the exam in spring 2016. The average composite score was 20.1 out of 36, a small increase from the previous average of 20. Students achieved an average English score of 18.6, down from 19.3. In math, students achieved a 20.1, also a small increase from last year’s 20.

Students at MMSD fared slightly better than the statewide average in every category, while students at MPS did slightly worse in every subject. The average composite score at MMSD was 21.1. At MPS, it was 16.5.

“All three Parental Choice Programs, comprised predominately of low-income students, outscored their full-income counterparts across the entire state on the ACT,” Jim Bender, president of School Choice Wisconsin, said. “Combined with the Forward Exam, these results highlight superior outcomes at a fraction of the cost to taxpayers.”

The data release is the first since the University of Wisconsin System released its Remedial Course Report in September. That report tracked the 175 high schools that had six or more 2015 graduates who required additional math or English remedial courses upon entering the UW System. Of the 175 schools listed, 160 sent graduating classes to the UW System where more than 10 percent of students needed math remediation.

Riverside University High School was ranked the 28th best high school in the state by the Washington Post, but nearly 60 percent of Riverside graduates who went to the UW System needed math remediation, and 20 percent needed English remediation. Tuesday’s data release revealed that the average ACT score at Riverside was 16.4.

Students at the Ronald Reagan College Prep High School, which was ranked 2nd in the state by U.S. News and World Report and 16th by the Washington Post, scored an average of 20 out of 36 on the ACT, in line with the state average. According to the Remedial Course Report, 42.9 percent of graduates who entered the UW System needed math remediation.

This analysis will be updated with further reaction as it becomes available.