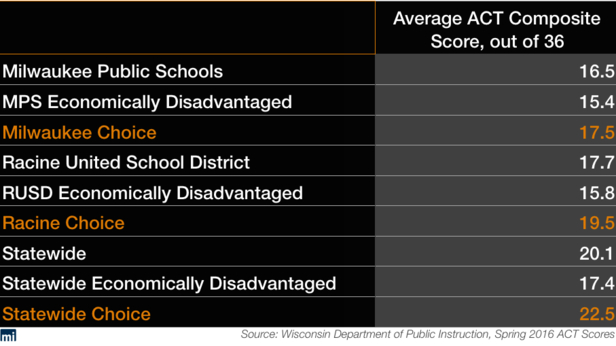 Fresh off the release of the first-ever Forward Exam results and new ACT scores, the Department of Public Instruction has published the most recent figures for enrollment in Wisconsin’s parental choice programs. Parents in Wisconsin continue to seek more educational choice.

In the 2016-17 school year, over 33,000 Wisconsin students participate in one of our three Education Choice programs – Milwaukee, Racine or Statewide. Student enrollment is up by about 500 students in each program. More than 40 new schools are participating, bringing the total number of schools in the program to 209, and needless to say, it’s scaring the educational establishment.

Why would anyone be afraid of all of these parents exercising their fundamental right to choose the education environment that is best suited to meet the needs of their child?

It’s “heartbreaking,” said Mary Young of SOS Wauwatosa in an interview with the Milwaukee Journal Sentinel. Young goes on to say that there after 25 years, there is no proof that voucher schools outperform public schools.

Heartbreaking? The only thing that’s heartbreaking is the deliberate misinformation campaign of anti-educational choice zombies that never seems to die.

Not only do we have decades of research to support the fact that many – not all – voucher schools outperform public schools, one can look at data released just a couple of weeks ago.

In all three choice programs, students outperformed their public school peers on the ACT exam. Let’s say that again for the people in the back: school choice students got better results for about half the dollar amount per student. These numbers came out in the same month as the enrollment data, and yet Young insists that such data does not exist. It’s willful ignorance from a member of the community held in high esteem. That’s heartbreaking.

Typically, we compare the results of choice students to economically disadvantaged public school students because the income limits on all three choice programs make it more of an apples to apples comparison. Choice students outperformed that subset. More importantly, choice students – who are largely economically disadvantaged – outperformed entire public school districts, not just the disadvantaged students. It’s a remarkable show, in my opinion, of not only how much culture matters to individual student performance but also the potential of parental choice in education.

I understand that institutions matter to some people, but when kids leave public schools for greener pastures, and those schools don’t get money for kids they’re no longer educating, I don’t call that heartbreaking. I call it good news for the kids who were able to get out. I call it a cruel trick on the kids who want to seek other options but can’t yet do so.

More than 500 students across the state remain on waiting lists, trying to get into choice schools but unable to do so because of arbitrarily-set limits that force them to stay in a school based on little more than a zip code.

Want a real Halloween fright? Try talking to someone who is vehemently opposed to school choice. Then ask them how much they know about the evidence. Boo!