Was it worth shutting down the courthouse for a day?

As the MacIver Institute recently reported, Dane County government in April sent 200 of its judiciary and law enforcement employees to a day-long “implicit bias” conference to address racial bias in the criminal justice system.

According to documents obtained by the MacIver Institute, Dane County taxpayers spent $50,000 on the salaries of those government employees who attended and other expenses. We also obtained copies of each presentation and the extensive feedback given by attendees through an open records request.

One presentation by Mark Soler, “Building on the Work of Others: How has this issue been addressed?” sought to explain implicit bias and suggested ways to combat it. Soler is Executive Director of the Center for Children’s Law and Policy, a Washington, D.C.-based organization that focuses on the treatment of youth in the criminal justice system.

In his 50-slide PowerPoint presentation, Soler urged that all meetings should be “no judgment zones” and that titles should be left at the door. He went on to define implicit bias as unconscious, unintentional racial bias caused by a reliance on stereotypes that affect the way people behave and the decisions they make.

Soler criticized the “dominant culture’s attitude toward race in the United States.” He questioned what he characterized as the commonly held assumption that the U.S. has made considerable progress on race relations. Soler went on to say that he does not believe that an individual’s life situation is entirely a result of their own actions or that racial inequality can be attributed to “the inability/unwillingness of individuals to properly adhere to basic American values like hard work and personal responsibility.” Soler clearly believes there is a lot left to do to improve race relations in the United States.

The presentation sought to help attendees determine if they belong to what Soler calls the “dominant culture.” Signs of belonging to the dominant culture include:

Soler’s presentation also cautioned against so-called “microaggressions,” which he describes as a “series of minor but constant indignities, incessant, often gratuitous and subtle offenses, based on race.” Solar believes that microaggressions “can impair the performance of people by sapping their mental, emotional, and spiritual energy.”

Individuals can combat implicit bias by becoming aware of their own hidden biases, changing the way they think, and adopting the viewpoints of “subordinate group members.”

He also suggested reducing pressure and stress in the workplace, both of which can cause people to make snap decisions without first considering which stereotypes are influencing their judgment.

Reviews of Soler’s presentation tended to regard him as knowledgable, but many questioned the usefulness of the information. “No hint of solutions was given,” wrote one attendee on an anonymous feedback form obtained by the MacIver Institute. 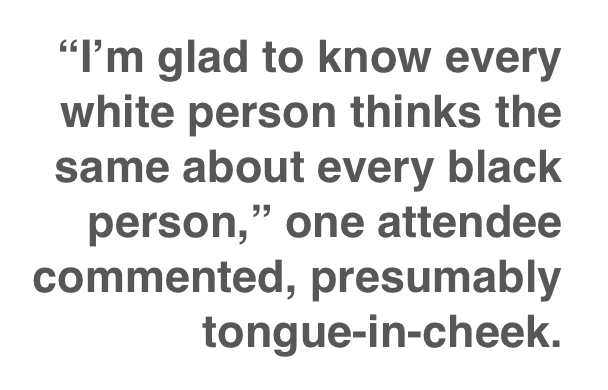 “More time on ‘what works’ would be nice!” wrote another attendee. “Would have liked more information as to the practical application of the information to our field. I did believe there were good points that would apply to law enforcement,” wrote another.

Other attendees felt the presentation was too long, repetitive, and made unfair assumptions about caucasians. One attendee felt the presentation implied that “all white people are stereotypical racists,” while another commented “I’m glad to know every white person thinks the same about every black person,” presumably tongue-in-cheek.

Another presentation, “Applying the Concept of Implicit Bias to the Real World in Dane County” focused on the county’s current and past efforts to promote racial equity and what additional steps should be taken. Judge Nicholas McNamara, Circuit Court Judge for Branch 5, and Colleen Clark-Bernhardt, Dane County’s Equity and Criminal Justice Council Coordinator, began the presentation with a series of headlines calling out “alarming” and “shocking” racial disparities in Wisconsin and Dane County.

They went on to define equity versus equality and explain the growing diversity of the United States from 1980 through 2040. They also discussed steps Dane County has taken since 2011 to address racial disparities in the criminal justice system. 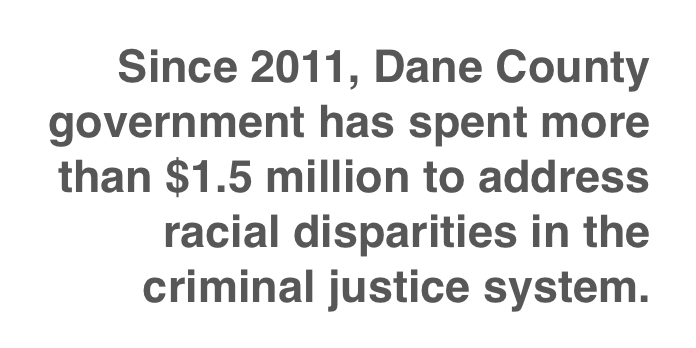 According to their presentation, the county has spent more than $50,000 on training for law enforcement, more than $30,000 on policy changes to advance racial equity, and more than $1.4 million on programming supporting “comprehensive, community based, evidence based services.” The content of the presentation did not make it clear exactly what the $1.4 million has been spent on.

Judge McNamara and Clark-Bernhardt also advocated for several comprehensive steps to encourage racial equity. They suggest ongoing education, data collection, and policy reforms “across agencies with a racial equity lens,” evaluation and corrective action, and the inclusion of a “community voice.”

Several attendees criticized Judge McNamara for his seemingly lack of preparation. One said he “rambled on,” and another asked, “did he prepare for his part?” Another person wrote, “Not sure what the point of this was…”

Whereas some attendees criticized the conference and some presentations for being irrelevant to their jobs, one commented that it “was nice to have it relate more to our area/jobs, etc.”

The complete agenda for the day included the following presentations:

Overall, 105 out of 200 attendees submitted a feedback form. Jeff Robinson’s presentation was by far the best received, with 85 people rating the quality and factualness of his presentation as “excellent” and 63 rating the information he presented as useful. Ratings for the remaining presentations were generally mixed.