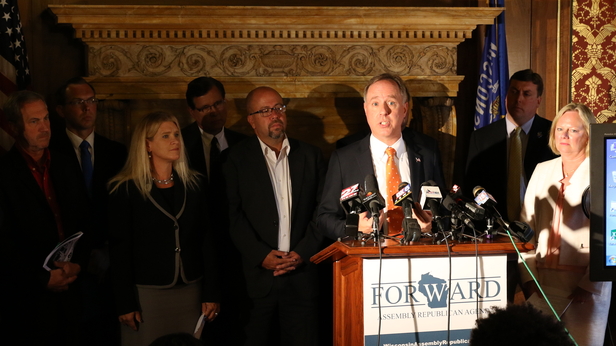 [Madison, Wis…] Governor Walker proposed lifting the state’s 5 percent sales tax on certain back-to-school items as part of his 2017-2019 budget during a press conference in Green Bay on Wednesday morning.

The proposal calls for exempting common back-to-school supplies from the state sales tax for two days starting the first Saturday of August of 2017 and 2018. The tax holiday would automatically sunset after those two years, allowing the governor, legislature, and public an opportunity to evaluate its effectiveness.

“The sales tax holiday we plan to include in our 2017-19 biennial budget will provide tax relief to the hard-working families of Wisconsin sending their children back to school in the fall,” Governor Walker said in a statement.

The Department of Revenue estimates the sales tax holiday would save Wisconsinites $11 million per year. The DOR would also have the ability to cancel the tax break by May 1 if the state’s budget picture would make the exemption imprudent.

“Our top priority has always been putting Wisconsin’s taxpayers first, and we’re always working to be better stewards of our taxpayers’ dollars and reduce taxes,” Walker said.

“Tonette and I know firsthand how quickly the cost of school supplies can add up, and this sales tax holiday is just one of the ways we’re working to reduce those costs and ease the tax burden,” he added.

Assembly and Senate Republicans introduced a similar proposal in January. Senate Bill 627 and Assembly Bill 781, authored by Rep. Nancy Vandermeer (R-Tomah) and Sen. Devin LeMahieu (R-Oostburg), passed the Joint Survey Committee on Tax Exemptions on a 7-1 vote but was not voted on before the end of the legislative session.

Assembly Republicans also rolled out their “Forward” agenda during a press conference that occurred at roughly the same time as the Governor’s announcement. The legislative agenda has three main prongs: improving the economy, expanding educational opportunities, and building strong families and safe communities.

Macco: we have an entire page on how to tax ice in WI. On all issues our citizens face, we need a tax system that's fair, flat #wipolitics

When asked about Gov. Walker’s proposed sales tax holiday, Assembly Speaker Robin Vos (R-Rochester) said that his caucus has supported a sales tax holiday in the past but decided to move forward with the plan in this upcoming budget. They welcome any proposal from the Governor that lowers taxes, Vos said.

On transportation, Vos spoke generally about the need for a funding fix, but didn’t commit to a gas tax increase or highlight specific measures to address funding. All options remain on the table until audit results come out before the next legislative session, he said.

Vos also discussed the importance of addressing criminal justice, and said that the agenda will include a ‘Blue Lives Matter’ bill, and will increase penalties for certain crimes while decreasing penalties for other, low-level crimes.

Tuition freeze will be extended-very popular in our state. Will improve transfer of credits btwn institutions. #wipolitics


A packet containing agenda specifics was distributed at the end of the press conference. Some of those agenda items include:

Stay tuned as MNS’ coverage on these issues will continue throughout the coming weeks.