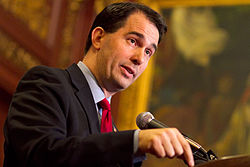 Governor Scott Walker announced Tuesday expanded eligibility for joining the UW Credit Union. In addition to past or present students of the UW System, “any Wisconsin resident who is currently enrolled or has attended any accredited institution of higher education can do business with the UW Credit Union,” according to the press release that accompanied the announcement.

The net effect of this is to increase the ability of student loan debtors to consolidate or refinance their loans at lower interest payments through the credit union. In addition, the government is launching the ‘Look Forward to Your Future’ website which lists thirteen private banks that offer student loan refinancing as well as information regarding student loan repayment plans and loan calculators.

The website and expansion of eligibility for the UW Credit Union are part of an effort to ease the burden of student loan debt. There are 812,000 student loan borrowers in Wisconsin in 2014, according to the U.S. Department of Education. According to Gannett, “70 percent of Wisconsin students who graduated from four-year colleges in 2014 had student debt.” In Wisconsin, Gannett also reports the average debt of Wisconsin graduates went from $17,000 to $29,000 by 2013.

The good news is students who graduate from not-for-profit and public universities are, for the most part, paying off their student loans. That’s because a four-year degree is still a pathway to higher incomes, generally speaking. That’s especially true if college students are careful in picking education paths that will lead to careers that have higher earning potential, such as STEM.

Ironically, the White House report on student debt notes, “Because borrowers with greater debt amounts are more likely to complete their degrees and have higher earnings after college, a related but counterintuitive correlate with good repayment outcomes is actually a greater initial loan amount.” In other words, the more a college graduate owes, the more likely they are to repay their student loans.

The White House report also notes that the default rate on student loans is actually highest among the small borrowers. Approximately one-quarter of borrowers owing less than $5,000 in principal were in default on their loans in three years. “The higher likelihood of default combined with greater numbers of borrowers with small loans means that loans of less than $10,000 accounted for nearly two-thirds of all defaults,” according to the White House report.

Given the smaller principal borrowed, the problem then isn’t the interest rates. Changing the rates for those borrowers would have a negligible effect on their monthly payments. The problem is that many of these people are either not completing school or graduating from for-profit universities with lower expected incomes afterwards.

There is certainly no harm, and probably a benefit, in making it easier for student loan debtors to refinance through the private sector, as Walker has done. Wisconsin’s Democrats say 500,000 Wisconsinites would benefit from being able to refinance their loans at lower interest rates, using numbers from a 2014 White House report. If that is the case, then it would make sense to remove the disincentives to refinancing federal student loans through private banks.

Instead, the Democrats blasted Walker as, “complacent with the student debt everyday Wisconsinites face and is unwilling to support legislation that allows borrowers to refinance their student loans at a lower interest rate, just as an individual can do with a mortgage.”

But Walker’s action shows that he isn’t being complacent, and student loans can be refinanced like a mortgage, too. That was also true of student loans before Walker expanded eligibility for membership in the UW Credit Union.

What the Democrats are really complaining about is that Walker hasn’t adopted their refinancing plan. They would create a state agency that would purchase federal and private student loans and do the refinancing at, in theory, no more than the cost to the state. The reality is the Democratic plan would cost Wisconsin taxpayers $108.7 million per year.

Worse, it would involve taking away expected profits from the private sector that made these student loans expecting to make money from the interest payments. The Democratic plan isn’t quite nationalizing the banks like a third world country, but forcing private industry to actually lose money just so the state can “solve” a non-existent problem by spending over $100 million per year is not good public policy. Especially when the same goal of reducing interest payments can be accomplished through the private sector.

But the most significant part of Walker’s announcement on Tuesday may be the website that tries to educate students and parents about student debt. The time to worry about college graduates being overburdened with debt is before the loans are taken out.

When the Joint Finance Committee rejected the most recent attempt by the Democrats to insert their government-run refinance plan into the state budget, State Rep. John Nygren said, “The degree, the field that they choose, is probably even more significant than any other conversation or any other subsidy that we can provide.” He was absolutely correct.

Parents and students should have a long conversation about the expected rate of return on the college degree they’re paying for with student loans. That the state can make that conversation easier with minimal investment should be applauded, not derided as a “gimmick.”