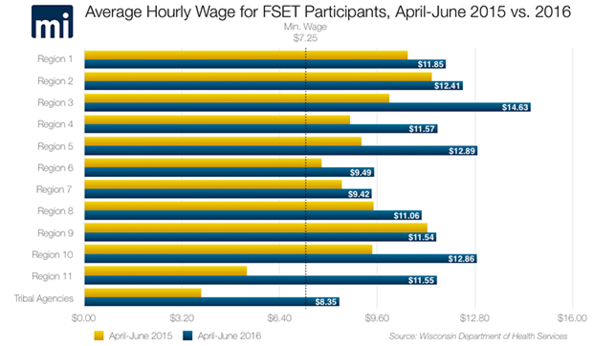 This story has been updated with reaction from Rep. Mark Born (R-Beaver Dam) and Sen. Chris Kapenga (R-Delafield) and will continue to be updated as reactions come in.

[Madison Wis…] Fifteen months after Gov. Scott Walker implemented new work and training requirements for the FoodShare program, wages and hours worked have both increased for participants in the FoodShare Employment Training (FSET) program. More than 14,400 people have found jobs since April 2015, according to new data from Wisconsin’s Department of Health Services.

Those jobs are also paying better and offering more hours than last year, according to the data. In April through June of 2016, the average employed FSET participant received $11.99 per hour and worked just over 32 hours per week, well over the state minimum wage and the minimum hour requirement to receive benefits.

“Wisconsin is unique because we made a significant investment in our employment training program for able-bodied adults through the FoodShare program. We recognize that while people want to work, sometimes they need help removing the barriers that prevent them from reaching that goal,” Gov. Walker said. “Our job training program offers FoodShare recipients a customized plan to help them enter the workforce, including free educational courses, vocational training, support to bolster their job skills, transportation assistance, and more.”

FSET enrollments have steadily increased since April 2015, when the Walker administration implemented new guidelines requiring able-bodied adults, aged 18 to 49 and without children, to work or receive job training in order to receive FoodShare benefits. Those individuals must:

When Walker proposed the new requirements, his critics were quick to condemn the governor. Sherrie Tussler, executive director of Milwaukee’s Hunger Task Force, compared the policy – requiring some work or job training to receive benefits – to slavery.

At the same time, 38,010 new individuals have enrolled in FSET and 14,410 people have entered employment. Of the almost 40,000 individuals new to the program, just over 23,000 were not exempt from the work requirements. The rest of the enrollments came from voluntary participants.

The release includes FSET data for April through June of 2016. Notably, the new data shows average hourly wages have increased in nearly every FSET region since April 2015. Even more significantly, when considering the same time period of 2015 and 2016, average hourly wage and average weekly hours both increase significantly in every single region. It appears that the jobs that FSET participants are getting are becoming more stable and better-paying.

Significant progress has also occurred in region two, which covers Milwaukee County. From April to June of 2016, wages rose to $12.41 per hour, up from $11.38 during the same time last year. The average weekly hours for participants is 33.5, up from 28.2 during the same time last year. Compared to other regions, Milwaukee has the largest FSET enrollment by far with 2,575 new enrollments in the last quarter, or just under half of all new enrollments during that time span. DHS reported 1,495 new employments in region two, with nearly 1,400 individuals finding work. As the data shows, some participants reported more than one job.

“FSET was designed to guide able-bodied adults into the workforce, or put them on a path to employment while on FoodShare,” Born said. “Today’s news that over 14,000 individuals have found work through this program is very encouraging and shows success in this initiative. It is important we continue to reform our public benefit programs in order to transition people from reliance on government to independence.”

Sen. Chris Kapenga (R-Delafield), Chair of the Senate Committee on Public Benefit and Regulatory Reform, agreed that the data release was largely encouraging.

“The recent numbers from the Department of Health Services exhibit that the power of work helps people build better lives for themselves and their families, more so than the false promise of a welfare check,” Kapenga said. “It was encouraging to see the number of hours worked and wages increase over the past year, as this will help people transition from dependence to independence even faster.”

The data release comes less than a week after Gov. Walker announced a new $4.5 million initiative in Milwaukee County. Under the plan, several state agencies will work to improve Milwaukee’s economically troubled areas by connecting job seekers with jobs. The Department of Workforce Development will allocate $1 million in “Fast Forward” funding to employer-based job training programs, of which FSET is one of many. At the press conference, Gov. Walker touted the importance of moving from government dependence to true independence as a crucial component of improving challenged areas in a meaningful way.

“Today’s announcement sends a message to the people of Milwaukee that we are here to help anyone who wants a job, find a job,” Gov. Walker said. “We are going to utilize new methods to market job and health services for people who need them, and we are also going to make a significant investment in worker training. This is all about helping people move from government dependence to true independence through the dignity that comes from work.”