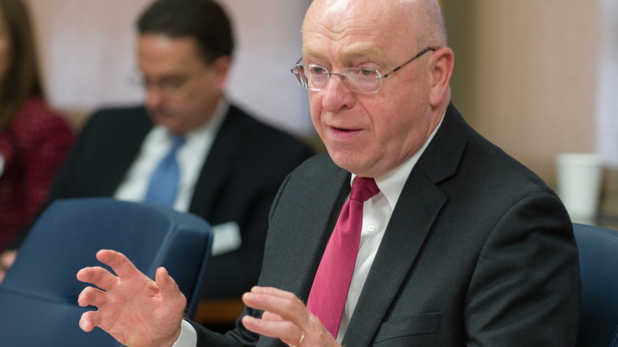 [Madison, Wis…] The University of Wisconsin Board of Regents approved System President Ray Cross’ biennial budget funding request today, sending the request to Gov. Scott Walker and the Department of Administration. The proposal requests $42.5 million in new general public revenue (GPR) funding and does not increase tuition for Wisconsin residents.

In his presentation to the Board of Regents, Cross stressed the “modest” and “reasonable” budget increase requested and focused on the large-scale picture of the university system’s role in the state.

“State support for the UW system, when adjusted for inflation, is the lowest in the UW system’s history,” Cross said. He went on to argue that while the system educates thousands of more students than it has in the past, state support has decreased, and that continued budget cuts would harm not only the system, but the state’s economy.

Despite the recent downturn in state aid, Cross found $55 million in May for salary increases after a warmer-than-expected winter resulted in lower utility costs and budgeted benefit costs came in under original projections.

In the current “operational excellence” section, the budget request seeks an additional $4 million for increased faculty compensation. No additional funding is requested in the first year of the 2017-19 biennium, but the full amount would come into play in 2019 so that the regents may have time to identify specific metrics for the new incentives.

In a July 25 letter to agency heads, Gov. Walker called for an extension of the popular tuition freeze, writing that maintaining the freeze would build on the state’s commitment to student success. University leaders have clashed with Walker on whether or not to extend the tuition freeze, arguing that tuition provides an important source of university funding and that program offerings have been limited as a direct result of the frozen tuition. Before Walker instated the freeze in the 2013-15 state budget, tuition had increased 118 percent – an average 8 percent per year – across the UW system in the prior decade.

“The request before you also includes a technical adjustment in the budget to align the state’s and the UW System’s budgets for tuition and fees,” Interim Vice President for Finance Julie Gordon said. “There are no tuition increases in this budget request. However, previously board-approved tuition actions, including increases for nonresidents and professional schools, would now be reflected in the state budget with this technical change. This is essentially, once every two-year time period, an opportunity for us to align our budgets.”

The 2017-19 budget is based on the system’s “2020FWD” project, which Cross described as a set of system-level priorities with four focuses: the educational pipeline, university experience, business and community mobilization, and operational excellence. The regents unanimously voted to approve 2020FWD before moving onto the budget request itself.

The focus on Wisconsin’s educational pipeline includes a requested $26.1 million in state funding across the biennium. The initiative would address the state’s workforce needs by building programs to introduce students to higher education, provide support through academic, career, and financial advising, and targeted developmental education programs, according to the budget request document. Cross also stressed that the system must address the seamless transfer between campuses and work to decrease time to graduation in order to fully address the state’s demographical challenges.

One program in particular – named Fluent – has already received attention from legislators and the media. Fluent would spend $4 million of state funding on “cultural fluency” training programs and require students, faculty, and staff to partake in the training.

The program would “[create] a foundation for civility and mutual respect throughout the university experience,” Cross said. “This isn’t just our opinion, this is something businesses are demanding.”

The budget’s focus on business and community mobilization seeks a total of $6.4 million in GPR for several programs which work to connect students with their communities – especially the business community. One such program, CareerCorrect, would be expanded to continue its work to promote student and employer “connectedness” statewide.

In her budget request presentation, Gordon said that the request does not include any additional “cost to continue” adjustments, despite an average $88 million adjustment for the last six biennia. However, the document does request a technical adjustment of nearly $168 million and 186.83 FTE positions across the biennium. Gordon said that this allocation mostly involves tuition, though it also includes many fees, such as ongoing technology fees. The Board of Regents approved these authority increases in the 2015-16 and 2016-17 annual budgets, according to the budget document.

The budget requests $191 million of program revenue for major building projects, as well as an additional $30 million for smaller projects under a system that mirrors bonding in the Department of Transportation. Unlike past years, the bonding request will be paid via program revenue rather than the standard taxpayer-backed bonds. Some projects, including UW-La Crosse’s field house and soccer support facility and UW-Stevens Point’s student health and wellness center, will be funded through increases in segregated fees.

Following Cross’s presentation, multiple regents and chancellors stood up to praise the budget process and the strategic plan. University of Wisconsin-Madison Chancellor Becky Blank rose to praise the budgetary flexibilities built into the resolution, particularly those involving capital funding and construction.

“The flexibilities are so important,” Blank said. “The place where we can most save money and run more efficiently and more effectively is in our building processes. Getting additional flexibilities on that front, I think is central for making these universities more cost-effective.”

Several regents criticized the budget both for technical issues and larger-scale problems. Regent Tim Higgens criticized the switch of the word “remedial” education to “developmental” education, which he argued creates a smokescreen for the public. Department of Public Instruction Superintendent Tony Evers said that he would vote against the request, arguing that the $42.5 million in new funding would not be sufficient.

“I think we should be asking for more operational money that has been reduced from our budgets in the past,” Evers said.

State statute requires the UW system to submit its biennial budget request by September 15 of even-numbered years. The request now moves to the Department of Administration and Gov. Walker’s office.