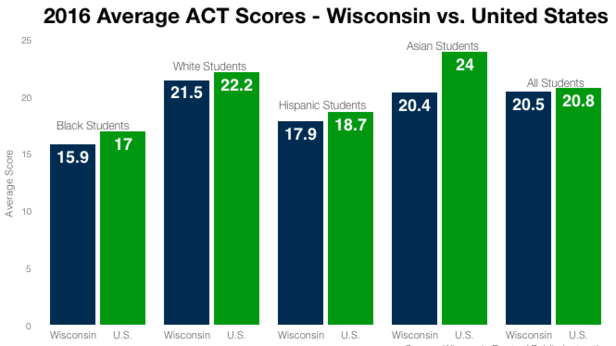 A drop in overall score, persisting achievement gaps, and a massive increase in students taking the exam

[Madison, Wis…] Wisconsin’s graduating class of 2016 scored an average of 20.5 out of 36 on the ACT exam – a 1.7 point drop from the class of 2015 and slightly below the national average score of 20.8. Of the 18 states that test all public school graduates, Wisconsin’s students ranked fourth, and third best in the midwest.

Wisconsinites outperformed the national average in terms of college readiness in only one category: science. Thirty-seven percent of Wisconsin students met the benchmark score of 23. Nationwide, 36 percent of students met the benchmark score in science. In all other categories, Wisconsin students fared slightly worse than the national average.

This year’s exam is the first that provides indicators of career readiness based on the ACT National Career Readiness Certificate (NCRC). According to the ACT, student attainment of NCRC levels indicates that “workplace employability skills” which are essential for future job success. In Wisconsin, a reported 67 percent of test takers made progress towards at least a gold NCRC level, compared to 68 percent nationally.