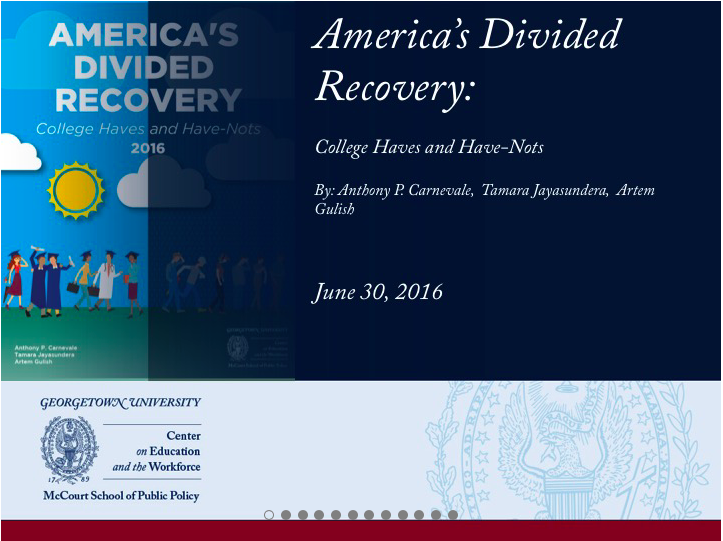 With the Great Recession, the nation’s people embroiled in the troubled economy saw 7.2 million jobs vanish. Today, the economy has recovered those jobs and added an additional 4.4 million. New information published by a Georgetown-based think tank shows, however, that the recovery has been uneven, divided by educational attainment. Unlike people holding Bachelor’s degrees and higher, people with a high school degree or less have experienced little recovery in their job prospects.

Released Thursday by the Georgetown University Center on Education and the Workforce, “America’s Divided Recovery: College Haves and Have-Nots” details how the economy now has more opportunities for those with a college education, a trend which, while existing before the Great Recession, was accelerated by the economic recession of 2008.

Next week, the MacIver Institute will publish an interview with one of the authors, Anthony P. Carnevale.

The report divides people into categories based on their educational attainment — those with bachelor’s degrees or higher, an associate degree or some college experience, and a high school diploma or less. Based on these categories, the authors evaluate which groups lost the most in the Great Recession and which have recovered the most. The researchers conclude that people with a high school education or less lost the most jobs but have recovered the least. Access to education, then, has become the critical access point to the middle class’s modern economy.

The Great Recession began in 2008. The job recovery did not begin until January of 2010, and it was not until 2014 that the economy had recovered the 7.2 million lost in the recession. Today, the U.S. economy has added an additional 4.4 million jobs to the pre-recession numbers.

At the lowest point of the Recession in December 2010, 5.6 million jobs lost of the 7.2 were held by people with a high school diploma or below. Associate degree holders or those with some college experience lost 1.8 million jobs. In that same month, bachelor’s degree holders and higher actually gained a slight 187,000 jobs.

Why has the recovery been non-existent for those with no higher education? The report highlights specific industries which have failed to recover and structural changes which favor potential employees with higher education.

The industries most commonly a source of employment for those with lower educational attainment were the hardest hit in the Great Recession and have failed to recover. The report highlights that construction and manufacturing are still 1.6 and 1 million jobs short of their pre-recession numbers, perspectively. Office and administrative support — another safe haven industry granting people access to the middle class without requiring a college degree — are still short 1.4 million jobs.

Structural changes to the U.S. economy over the last 50 years have significantly disadvantaged those without college degrees. Beginning in the 1980s, the economy has shifted from traditional factory jobs to professional service industries which are more likely to demand a workforce with higher education. In addition, the digital information age beginning in the 2000s automated, or at least consolidated and eliminated, many jobs held by those with less education.

Further, staying ahead in an increasingly complex economy required that each worker be able to navigate the at-times byzantine market caused by technology and government regulation. This partially explains why management occupations added the most jobs of any occupation group since the Great Recession. Increasing complexity means that “Much of the long-term growth in these occupations comes as a result of the increasing complexity of the business landscape as employers try to function in ever more complicated networks and regulatory environments.”