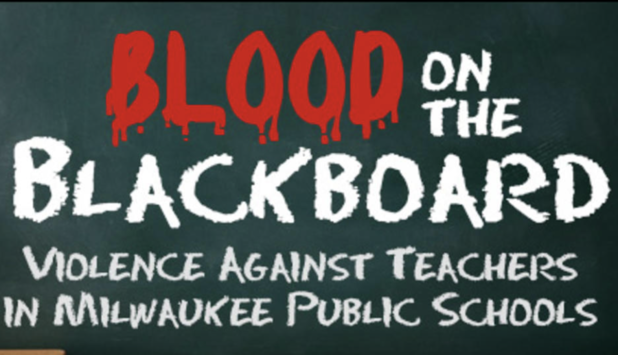 [Madison, Wis…] There’s an untold story of violence against teachers in Milwaukee’s public schools, and a recent radio documentary by WISN’s Dan O’Donnell publicized shocking details of the growing problem from a reliable source – actual teachers.

The MacIver Institute recently spoke with O’Donnell about his story and the explosive allegation that the administration at MPS is deliberately hiding the problem from the public because of political pressure.

What was your inspiration for this story?

Dan: I’ve got a lot of friends who are teachers, and for years I would hear stories about the crazy, chaotic things that would go on in their classrooms, and hear stories about violent outbursts, threats made against them, open challenges to their authority, and the worst language you could possibly imagine. And for years, I would listen to these stories, and hear them get worse.

It seems to be focused on Milwaukee Public Schools. Other teacher friends I have in suburban school districts, in private, Catholic schools don’t seem to be experiencing this same thing, but Milwaukee Public Schools, I suspect like many large, urban school districts, have some of the worst disciplinary problems you could imagine. And yet, I’m hearing stories that these are sort of swept under the rug.

Finally, what really triggered it was a couple of incidents in the spring. One was a violent assault on a school security aide at Milwaukee Vincent High School, and another was a very infamous incident that became a viral video of a school security aide at Bayview High School named Jasmine Pennix finally being pushed too far by a student who, it turns out, very well could’ve been setting Pennix up…well it comes out that there are a couple of witnesses, adult witnesses, who said these kids were punching Pennix and kicking him and slapping him, and swearing at him and just egging him on with the intent to videotape Pennix’s response, and sue MPS and make a lot of money.

I went on the air and said OK, I want to hear from teachers who have had experiences like this…and from there I was able to get a good network of teachers willing to tell their stories, and do so almost entirely confidentially. From there it really took off.

Most people would be shocked to hear these stories. What was your reaction when you first started hearing that kids at MPS were not just acting out, but sometimes violently assaulting their teachers?

I was shocked, but not surprised because of all the reporting that I’ve done on the violent crime epidemic in the City of Milwaukee. And what I’ve noticed since I started in the business…I see younger and younger defendants. I mean, we have had murder suspects as young as 13 years old in the city. So it didn’t particularly surprise me that some of these same kids were having violent outbursts in the classroom. What surprised me was the sheer volume.

What really shocked me was the fact that most of these incidents simply go unreported. There are a number of reasons for this, and one of the most tragic is teachers feel like, OK if they write the kid a referral to go to the office for discipline, nothing’s going to happen and that kid’s just going to come right back and engage in the exact same sort of behavior.

But to hear that the Obama Administration was actively pursuing a policy that basically made it darn near impossible for large, urban school districts to administer discipline – that to me was really eye-opening.

From your investigative work, can you share the rationale behind the Obama Administration’s position?

Dan: What’s happening is what I’ve termed the “Ferguson Effect” in education. Their theory is called disparate impact, and this means that any disciplinary policy that’s enacted with no racist intent or no intent to discriminate whatsoever, can in fact be considered discriminatory if it results in more, say, African American or Hispanic students being disciplined than white students.

The thinking of the Obama Administration is that teachers are suspending African American or Hispanic students more often because the discipline system, much like the criminal justice system in the eyes of liberals, is stacked against minorities, that there’s this innate racism on the part of teachers and school administrators that comes out in the handing out of discipline.

The unintended consequence is that these schools have felt intimidated in how they administer their own discipline. So they don’t even want to discipline students at all. Then to top that off, I was provided with a letter from the Justice Department…the Justice Department’s Civil Rights office in Chicago is actually going into MPS schools to interview individual students and teachers about discipline policy. This is more like an interrogation…this is an obvious attempt at intimidating individual teachers into simply not writing referrals at all.

One of my sources…he has been in the inner workings of MPS for years, and he said this has had a devastating impact…and he knows that the result of that policy was that…they just didn’t suspend anybody. It was like ‘get those suspension numbers down, otherwise we are going to be in deep trouble with the federal government.’

What kind of reaction have you gotten since the story aired?

Dan: Most teachers have said ‘this is my life.’ Teachers are, I think, grateful that someone has finally told the story of what exactly is going on in these classrooms.

What’s been the reaction from MPS and the school board?

Dan: Nothing. Their response: absolute silence. I’ve heard nothing from them since this aired. I invited them to come on. Total refusal. In fact, I filed an open records request for a number of different statistics…they provided me with one of the three different sets of data that I requested and then closed my open records request.

Any reaction from the teachers’ union, MTEA?

Dan: No, no reaction whatsoever…they retweeted Marla Kilfoyle, ‘end policing in our schools’…so you can see where MTEA is coming from here. They’re literally tweeting out this exact same philosophy as the federal government.

It’s sad to see so many professionals working in an environment that you or I…if someone assaults us in our workplace, the police will come instantly. That co-worker or whomever it is will be arrested, they will be fired, there will be harsh consequences.

These teachers want to know why, in their workplace, do they have to put up with this?

Did any of the teachers you spoke with talk about leaving their job as a result of the violence they face?

Dan: There were a couple who I talked to who had just left the district actually because of violence or because they just couldn’t take the work conditions anymore…the overwhelming majority of them said they’re still going to teach…they love doing what they’re doing, they couldn’t imagine doing anything else. Will they give serious consideration to leaving MPS if conditions don’t improve? Yeah, probably.

A lot of them said they love teaching in an inner city environment, to work with the kids who truly want to learn, and who can function in a classroom…these kids who are trying to learn simply can’t, because the teachers are too busy dealing with kids whose behavior is getting worse and worse and more and more out of control.

Most people would wonder what could possibly be so important that you would risk the safety of your teachers and allow classrooms to be chaotic. What’s so important about holding down their suspension numbers?

Dan: There was an explicit threat in the “Dear Colleague” letter (from the Justice Department)…that the federal government was going to take local school districts to either federal court or an administrative hearing if their disciplinary policies didn’t shape up, if they were flagged for having a disparate impact in their discipline.

But implicit in that…what do you think the federal government would do if you don’t comply with their standards? They’ll pull funding. For MPS, that’s 17 percent of their annual budget, just gone. I think it’s a very powerful motivator to comply if you’re threatening to withhold a substantial amount of funding.

This was, I think, kind of a blockbuster report that MPS seems to be trying to just sort of sweep under the rug…conservative activists are really sharing this and it’s gone gangbusters among teachers. I think the message is getting out there.

The only thing that I really wanted to do with this is to have teachers and students feel safe in their schools. As one teacher told me, everyone has a right to feel safe in school.

I just wanted the word to get out that this is going on and that it can’t be tolerated anymore.

Listen to the full “Blood on the Blackboard” story: