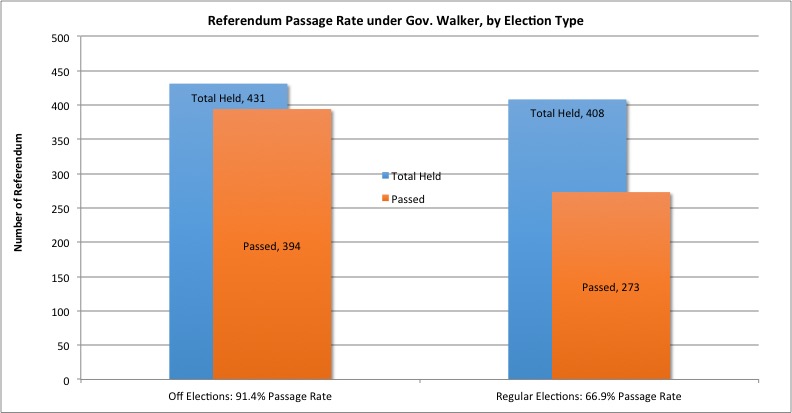 Referendums increased in number under Gov. Walker, but down in price tag

[Madison, Wis…] A MacIver Institute analysis has found that referendums held during Gov. Walker’s administration were 20-25 percent less likely to pass if held on the same day as a regular election.

Off-elections were elections in which only the school referendum was on the ballot in a district, or the elections happening on that day were localized, such as a special election to replace an Assemblyperson.

While schools during the Walker years have held more referendums, further analyzing the fiscal numbers and districts involved in the referendums reveals that depending on the sheer number of referendums is a poor policy guide.

Some of these schools were repeat askers because the first and second referendums failed, but others passed all three or more. These results are difficult to interpret. Are these schools’ budgets chronically mismanaged? Or are they experiencing unforeseeable costs that tighter budgets are making difficult to absorb?

What the MacIver Institute’s analysis does find is that schools have drastically decreased the amount of money asked for in each referendum, thus seemingly trading quantity of referendums to make up what previously would have constituted one referendum. Schools districts going to referendum during Doyle’s administration asked for a total of $4.7 billion. During the Walker administration, that number has increased a mere 8 percent to $5.1 billion, even though the number of referendums has increased by about 25 percent.

That school districts are asking for the same amount of money through smaller but more frequent referendums seems to be confirmed by other statistics. During the Doyle years, the median dollar size of referendums asked for was $2.5 million, and the median referendum approved by voters at a rate of 48.6 percent was $2.26 million.

In the political narrative surrounding school referendums this year, Wisconsinites are led to believe that more and bigger referendums are passing because of various state policies. While our analysis did find that the number of referendums has increased and are passing at increasing rates, they are smaller, not larger, when compared to previous years.