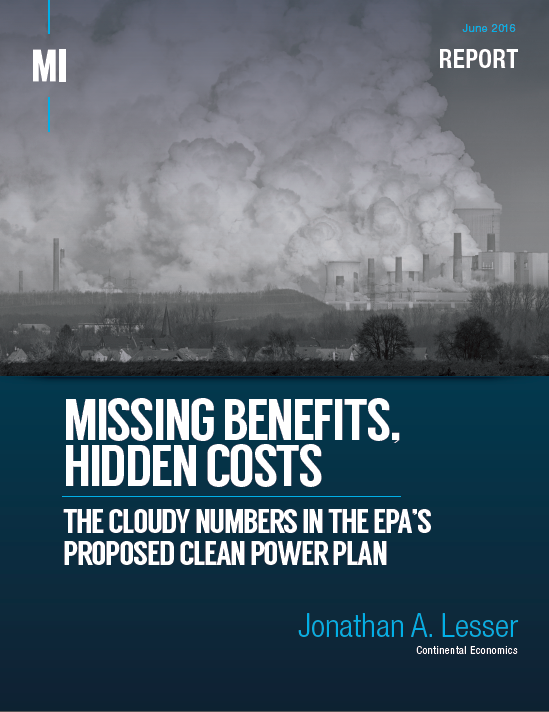 In the media narrative surrounding the CPP, American consumers hear that the CPP’s benefits are extensive, totally $14 to $34 billion by year 2030. The Manhattan Institute report reveals, however, that the method used to calculate those benefits is flawed.

The MacIver Institute has previously reported that the CPP will increase costs for Wisconsin’s consumers. According to a joint report by the MacIver Institute and The Beacon Hill Institute at Suffolk University, the original Clean Power Plan proposal would have cost Wisconsin $920 million in 2030, increased electricity prices by 19 percent, and lowered disposable income in the state by nearly $2 billion. Since MacIver and Beacon Hill published their report, the Obama administration increased the carbon emission reductions from 30 percent to 32 percent. Now that the finalized rule requires a larger percentage of reductions, the costs could be even higher for the Badger State.

A major source of the CPP’s benefits come from the supposed improved health of those living in a world without global warming. Citing the CPP, “The emission of greenhouse gases threatens American’s health and welfare by leading to long-lasting changes in our climate.” These health benefits, however, are overestimated as the CPP may double count benefits from the EPA’s other environmental regulations.

Further, Lesser notes that the EPA analyzes the benefits of reducing ozone as if any presence of ozone adversely affected health. Quoting the author “the EPA assumes that there are no threshold levels of ozone concentrations below which there are no adverse health impacts.” In reality, exposures levels beneath a certain threshold do not affect a person’s health. Lowering exposure levels below that threshold do not yield any practical benefits and so should not be counted as a benefit.

The CPP overestimates benefits by presuming that the increased energy efficiency of some technologies like lightbulbs will result in a lower total demand for electricity. If the economy statically consumed the same amount of energy, this might be true. However, good predictions must account for snapback impacts: the tendency of individuals to consume more of a cheaper product. Thus, while energy efficiency for objects like lightbulbs may reduce an individual’s total consumption of electricity temporarily, should the overall price of electricity decrease, consumers are more likely to use more electricity by leaving the lights on. The predicted benefits would then be eaten up by increased consumption.

What benefits of the CPP are attributable to an individual American consumer are difficult to tell. Rather than counting the CPP’s benefits to the American public, the CPP counts the worldwide benefits, of which the United States is only a small part. Thus, the costs are entirely U.S. born, and the true benefits for an American created by the CPP are a smaller part than the EPA’s cited world-wide benefit. Inso doing, the EPA also obscures the disproportionate impact of costs on the poor, for whom benefits may never meaningfully be realized.

Whether the CPP will result in various health benefits or not, the goal of the CPP — to control global warming by mandating reduced carbon emission — is not achieved. Using an EPA-sponsored climate model, the CPP is estimated to have no measurable impact on the earth’s temperature. CPP reforms are modeled to change the earth’s temperature by only 0.01 degrees Celsius.

The CPP was stayed by the Supreme Court in February so that the plan could not go into effect while the DC Circuit Court of Appeals considers its constitutionality. Oral arguments are scheduled for September.