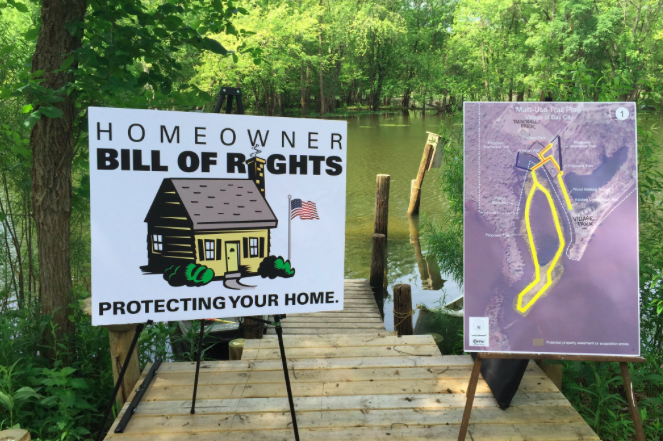 [Madison, Wis…] State Senator Tom Tiffany and State Representative Adam Jarchow rolled out a new initiative on Wednesday called the Homeowners’ Bill of Rights which they hope will protect Wisconsin homeowners and “defend the American Dream.”

The legislators introduced a ten-point plan that pledges to continue to control property taxes, reform the eminent domain law, protect the right “to fly the flag” and rein in burdensome regulations at a press conference held on Dave Meixner’s property in Bay City.

According to Tiffany and Jarchow, Meixner’s property is at risk of being taken from him through the use of eminent domain, a law that allows government to take private property for a public use.

“Studies consistently show that homeowners enjoy a significantly higher net worth than non-homeowners. That is why we believe more should be done to protect and encourage families to become homeowners,” commented Tiffany and Jarchow in a press release. “Unfortunately, the creep of overbearing government at all levels has imperiled property rights and homeownership. It’s time for reform that protects and defends home owners and by extension, the American Dream.”

The Homeowners’ Bill of Rights includes provisions to:

Another goal of the package is to see increased homeownership through decreased regulation on homebuilders. A National Association of Homebuilders study found, on average, regulations accounted for 24.3 percent of the final price of a new single-family home. Tiffany and Jarchow worry that increased prices have restricted housing options for first-time buyers and might have pushed some out of the market entirely.

The Homeowners’ Bill of Rights will not be enacted into law anytime soon. Most legislators are back in their districts running for re-election this fall and the full Legislature is not scheduled to be back in session until January of 2017.