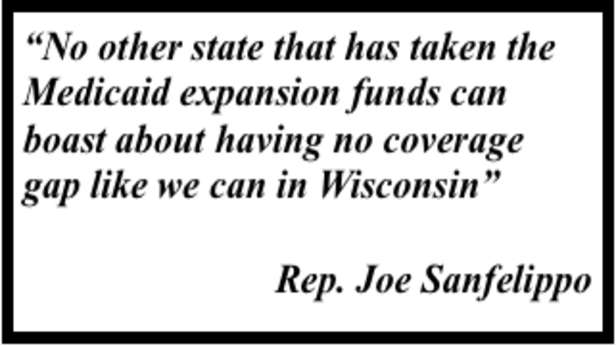 If your family was making $75,000 annually and a lender offered to pay your mortgage for the first few years if you purchased a home worth $3 million, would you take that deal?

I’m confident most people would be smart enough to turn it down because once the financial assistance ends, you’d be on the hook for payments you could have never afforded in the first place.

It’s that same reason why Wisconsin has made the right decision in declining to accept federal Medicaid expansion money as part of Obamacare – we won’t be able to afford the future expenses.

One of the most disingenuous claims coming from expansion supporters is that taking the “free” federal dollars would cost Wisconsin nothing. That couldn’t be further from the truth since most states that have accepted the expansion money are experiencing skyrocketing Medicaid costs, which are throwing their budgets into turmoil.

While the federal government has said it will pick up most of the tab of expanding Medicaid in the beginning, that funding will gradually decrease each year, placing a larger burden on state taxpayers for years and years to come.

In Illinois, the state’s projected cost of expanding Medicaid has increased from $573 million to $2 billion between 2017 and 2020. Kentucky could also be looking at an annual cost of $363 million by 2021.

Then there’s Ohio, where Gov. John Kasich predicted his state’s Medicaid expansion would cost $14 billion from 2014 to 2020. But new estimates show the expanded program is now on track to cost $28.5 billion by 2020.

Translation: The future budgets of states that accepted the Medicaid expansion are now in significant peril.

We don’t want the same thing happening here in Wisconsin. According to the nonpartisan Wisconsin Legislative Fiscal Bureau, state medical assistance expenditures already are at $8.5 billion, and are expected to increase by nearly $1.9 billion over the biennium. If we accepted the expansion money, that number could be significantly higher based off of what is happening in other states.

Another reason it was wise to reject the Medicaid expansion dollars is the federal government’s notorious track record of making commitments it does not keep.

Just as one example, many Obamacare co-ops have been forced to close down because they were receiving much less in “risk corridor” payments than promised.

The risk corridor program was created to safeguard insurers from heavy losses by shifting money from insurance companies doing well to those performing poorly. But the amount of money coming in was so small the program could only pay about 12 percent of the $2.87 billion that was requested, leaving gaping holes in the budgets of numerous co-ops.

According to a report released last month by the U.S. Senate Homeland Security Permanent Subcommittee on Investigations, the heavy costs of the failed co-ops will be borne by taxpayers, doctors, patients and other insurers. None of the unsuccessful co-ops have repaid a single dollar, principal or interest, of the $1.2 billion in federal solvency and start-up loans they received.

The investigation by the subcommittee also suggests that no significant share of the loans will ever be repaid. In other words, taxpayers will be taking a hit in their pocketbooks once again.

Yet, even with all these red flags, Democratic elected officials in Wisconsin continue to push for Gov. Scott Walker to accept the Medicaid expansion.

Their efforts are now focused on promoting the SAME Act, legislation introduced by U.S. Sen. Tammy Baldwin, D-Wis., and other Democratic lawmakers that would allow states that refused the Medicaid expansion after the original 2014 deadline to receive the same level of federal funding as states that initially accepted the expansion.

In typical Democrat fashion, Baldwin has not disclosed how the federal government will be paying for any of the states that decide to show up late to the party. However, I will give you the answer: It’s you, the taxpayer.

Here in Wisconsin, we have been working hard to come up with responsible solutions to ensure all residents have access to quality health care.

Due to Gov. Walker’s Entitlement Reform Plan that was signed into law in 2013, all eligible adults living in poverty are covered by BadgerCare, the state’s version of Medicaid. Those above 100 percent of the federal poverty line are able to obtain subsidies and private coverage through the federal health insurance exchange.

By making those changes, the number of uninsured adults in the state has been reduced by 224,580.

Even though Wisconsin has declined to take the federal expansion money, we are the only state in the nation that doesn’t have a coverage cap when it comes to health insurance, according to the Kaiser Family Foundation. No other state that has taken the Medicaid expansion funds can boast about having no coverage gap like we can in Wisconsin.

The program we designed ensures that every person has access to coverage whether it be through the federal exchange or BadgerCare.

As a result of the decision not to take the expansion, Wisconsin citizens are much better off in the long run from both a financial and overall coverage standpoint.

Facts are stubborn things, and they clearly show Wisconsin made the correct choice for our future by not accepting the expansion money.