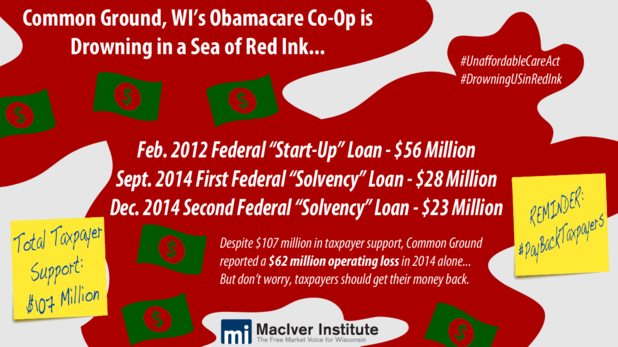 [Madison, Wisc…] The MacIver Institute warmly welcomes President Obama as he visits Milwaukee today and asks that he comes clean with Wisconsinites about the failures of his signature achievement, the (Un)Affordable Care Act.

“The Obama administration has been as transparent as mud about the financial health of Wisconsin’s Obamacare co-op, Common Ground Healthcare Cooperative,” said Brett Healy, president of the John K. MacIver Institute for Public Policy.

Eight of 11 surviving Obamacare co-ops are in financial trouble, but in testimony just last month before a House oversight subcommittee, Mandy Cohen, chief operating officer for the Centers for Medicare and Medicaid Services, refused to disclose which co-ops were struggling.

There are two watch lists for troubled exchanges – those under ‘enhanced oversight’ and those on a ‘corrective action plan’ – but we do not know where Wisconsin’s exchange stands thanks to the obfuscation by CMS.

“President Obama is here to celebrate higher enrollment numbers for Obamacare in Wisconsin. But he is not being truthful about the enormous taxpayer losses at the government’s Common Ground Healthcare Cooperative,” Healy said.

“Wisconsinites deserve to know if Common Ground is on life support, terminally ill, or without a pulse,” Healy said.

While Common Ground has experienced greater success signing Wisconsinites up than originally predicted, it has been losing money from its start back in 2012.

“I know the president only wants to focus on the enrollment numbers because of all the other serious problems Obamacare is experiencing, but he needs to give Americans a complete and accurate picture of Obamacare. With all the taxpayer money that has been spent on solvency loans and other bailouts, Obamacare has been a financial disaster. With our country $19 trillion in debt, and the cost of Obamacare on an unsustainable path, we are jeopardizing the future of our children and our grandchildren. We need to end this fiscal insanity now,” Healy said.