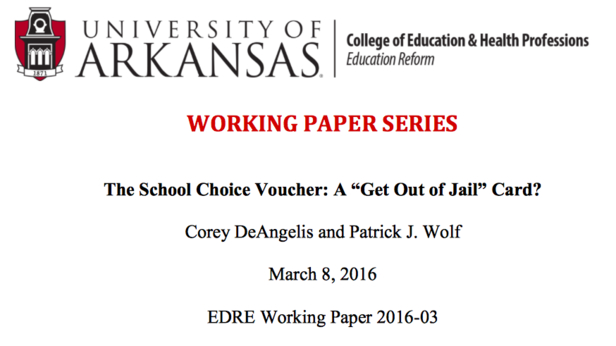 The study found that merely being exposed to private schooling through a voucher has no statistical significance on one’s likeliness to commit crimes. However, once remaining in the program for four to five years, MPCP students – especially males – were less likely to commit misdemeanors or felonies of any kind, or to be accused of any crime. None of the estimates found that exposure to MPCP resulted in a statistically significant increase in criminal activities.

School choice advocates hailed the report as highlighting the difference in culture between Milwaukee’s public schools and the MPCP.

“These results confirm what parents already know – school culture matters,” Jim Bender, President of School Choice Wisconsin said. “Parents are seeking environments where strength of character plays a significant role. This study highlights the positive impact the MPCP has on crime and community.”

Most evaluations of public school choice focus on student educational outcomes such as standardized test scores or high school graduation rates. Other studies measure the success of choice programs by rating parent satisfaction or measuring achievement gap differences. Many studies have established the relationship between higher levels of education and lower levels of crime, but none have examined the difference in outcomes based on type of schooling. This study is the first to analyze the effect of a private school choice program on the criminal behavior of young adults.

Kevin P. Chavous, founding board member of the American Federation for Children, also expressed his excitement in the findings.

“This research shows the important correlation between receiving a great education and keeping children and our communities safe.” Chavous said. “We hope people look at this study and see the broad positive impact of educational choice and a quality learning environment.”

Researchers used an algorithm to construct comparison groups that matched 9th and 8th grade MPCP and Milwaukee Public School (MPS) students based on grade, neighborhood, race, gender, English Language Learner status, and math and reading test scores. Voucher students were matched to MPS students in the same grade and neighborhood census tract, then to students who were in the same 5 percent bandwidth of 2006 test scores. Each MPS student was then matched with an MPCP student based on the nearest-neighbor propensity score for a total sample size of 2178 individuals.

In order to test for criminal activity, researchers searched for cases using the Wisconsin Court System Circuit Court Access, which publicly lists criminal accusations and convictions committed by adults in Wisconsin. Researchers searched the database in 2015, when students in the sample were 22-25 years old.